From dairy farm to spy station: This local winery has a secret past dating back to WWII

News of the Japanese surrender to end WWII was first heard at Vint Hill Winery, who named their signature red wine "Enigma" as a tribute to the encryption machine. 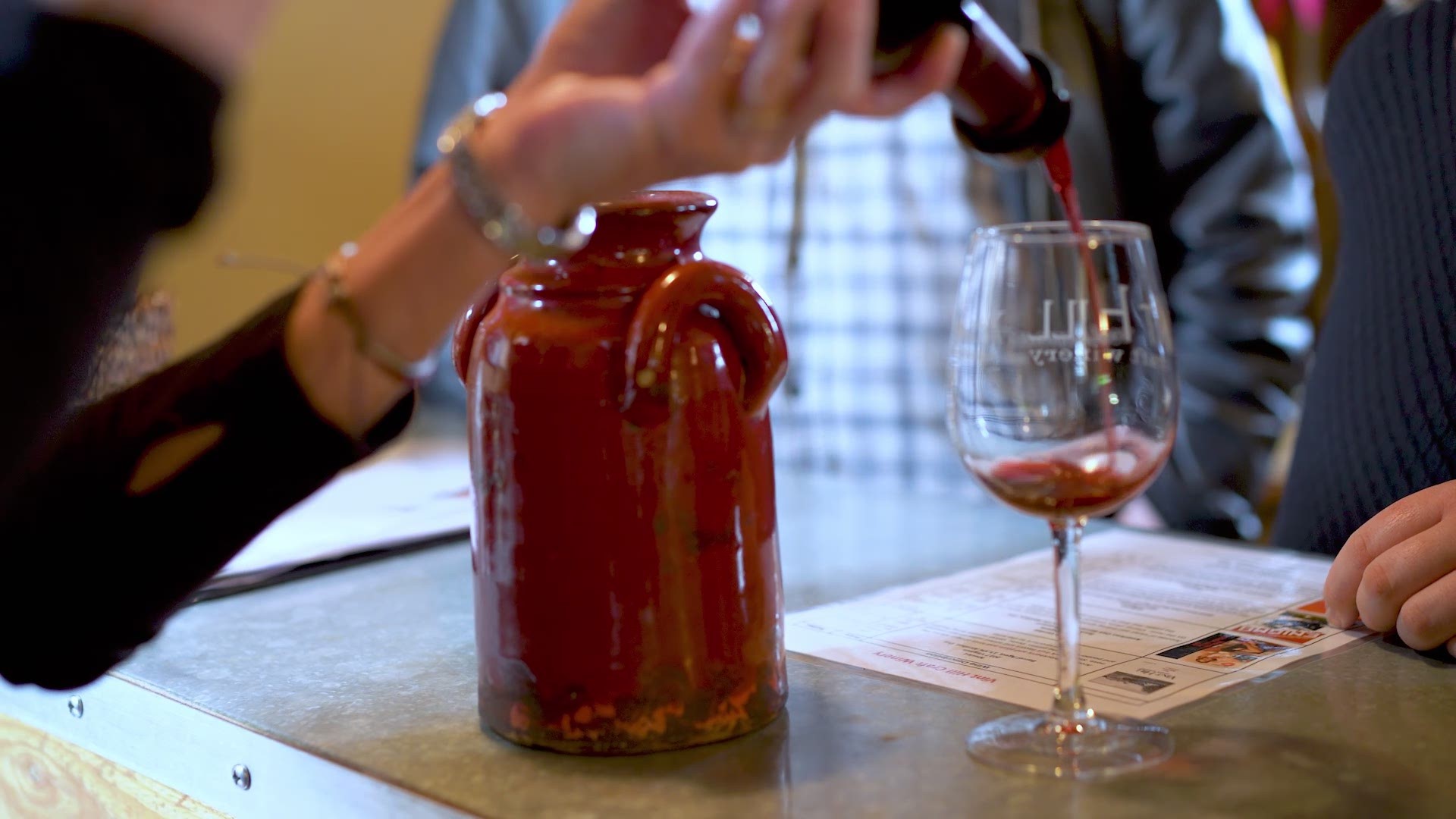 WARRENTON, Va. — The history lesson you'll hear at Vint Hill Craft Winery sounds more like the start of a spy novel. After all, the glasses at the winery say,"You were never here." So, what secrets does this place hold?

Our story starts in 1942 on a quiet dairy farm in Warrenton, Virginia.

"What Vint Hill used to be is a top-secret signals intelligence base," Jason Hall, executive director of the Cold War Museum, said. "It's one of the four best places in the world to listen to radio signals."

But how that bit of knowledge was discovered is an even better story.

"It's 1942, and the farmer that owns this place happens to have a short-wave radio," Hall said. "He invites one of his friends over who happens to be an officer in the Army Signals Intelligence Corps."

And before the two sit down to dinner, the farmer tells his Army buddy that before they have dinner he has to listen to his radio, because he's hearing the taxi dispatchers in Berlin talking to their cabs.

1 / 6
WUSA9
At Vint Hill Craft Winery in Warrenton, Virginia, you can have a glass of wine where WWII encrypted messages were intercepted.

"So, the Army immediately tests this place out and says, 'oh yes, you've got something very strange going on here.'"

Given that it was 1942, the Army needed to listen to the Japanese signals. What they heard changed the course of history.

They began intercepting encrypted messages, some were even from the Japanese Ambassador to Berlin, with information on the Nazis.

Had those messages not been seized, "it would have meant a lot more people would have been killed," Hall said.

"We're a place to tell stories," Vint Hill's Managing Partner Chris Pearmond said. "Everybody has a story about how World War II and the Cold War affected them, and we're able to have a platform with a glass of wine."

Vint Hill Craft Winery | The Virginia Winery With Great Tastes
Many "custom crush" wineries focus on vineyards. At Vint Hill Craft Winery, we take a different, and we think better, approach. Our process starts with and is dedicated to winemaking and our commitment is to deliver to you the highest quality. Click the link for more on us and our latest awards.
Vinthillcraftwinery

History plus a glass of wine, sounds like a winning combination. And over that wine, Pearmond has heard some stories and some secrets.

“It's amazing how many people come here and say 'you know, I would like to tell you what I did here 40 years ago,'" Pearmond said. "It's great because I ask them 'what did you do here 40 years ago?' And they say, 'did I say I was here 40 years ago?' I say 'if you were here, could you talk about it?' They say 'no, but I'll have a glass of Chardonnay, please.'"

The people stationed at Vint Hill also had a front-row seat to the end of the war. In fact, the news of the Japanese surrender to end WWII was heard there first, by a woman named Helen Weiss.

"She was, we understand, the first person to receive the Japanese message of surrender when it was sent from Japan to the U.S.," Hall explained. "That immediately went to the White House, and the notepad on which she wrote that message is still in her family."

When Weiss’ family visited the Cold War Museum, which is next door to Vint Hill Winery, Hall said they looked at a photograph and picked her out, exclaiming "that’s my mom."

Credit: WUSA9
Helen Weiss, one of the women who had significant jobs at Vint Hill, was the first person in the U. S. to hear the Japanese message of surrender.

"I realized that it was a very important mission, that we were on the cutting edge," Mike Washvill, who was stationed here during the Cold War, said. "The combat mission personnel really don't go into their mission until the shooting starts, but in the intelligence environment, you're collecting intelligence continuously. You want to know what the enemy has, where they are, what they're doing, how they operate and you do that all the time."

"Most people are amazed when they find out what was happening here and how it was done," he said.

Artifacts from the Cold War Museum in Warrenton

We wanted to know what it’s like for Washvill, someone who was stationed at the post, to see what Vint Hill has become.

"It's different to see the barracks and places I lived in, and what they've become," Washvill said. "They're really sort of abandoned there, but looking at these facilities that were used as maintenance and development warehouses and research and development labs now being used for commercial purposes, it's interesting!"

It’s interesting because pinups that graced wartime aircraft back in the day, are now featured on wine bottles; wine club membership is entered into with a challenge coin; and Vint Hill's signature wine has a secret grape mixture or code they won't reveal, which is named after the encryption machine, Enigma.

"I think that's the most important part about what we do," Pearmond said. "As those people pass, that we can keep some of the memories alive."

If you think this is just about the past, Mike has one more lesson.

"Technology developed during the Cold War by the government and the military pervades everyday life," he said. "No one thinks about it. The cell phone in your pocket contains four different types of Cold War military technology. Nobody realizes where it came from or how it got there, but it's a fascinating evolution."

I think we can all drink to that.

RELATED: 100-year-old Tuskegee Airman, Cleveland native honored at State of the Union after being promoted to Brigadier General

RELATED: Woman discovers grandfather saved thousands during the Holocaust. She even met one woman who is alive today due to his actions.