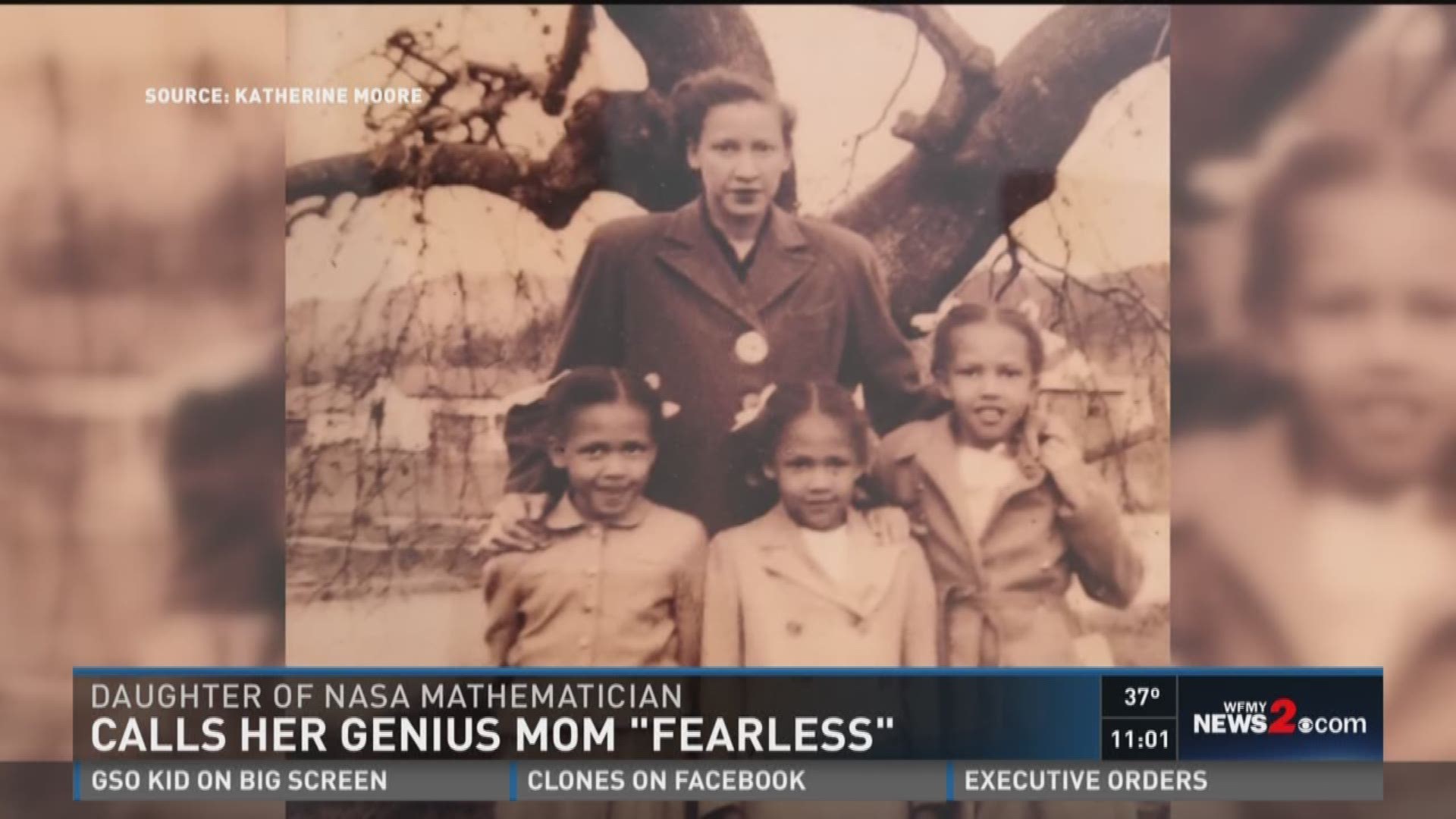 Seeing the movie started as a research project. Two days later, I would interview the daughter of Katherine Johnson, the mathematical genius who helped astronauts like Alan Shepard and John Glenn launch into space.

But, while watching, I cried real tears, laughed out loud during certain parts, while the story unfolded during the segregated 1960s.

For me, it was much more than a research project. The movie was lesson in black and women's history. The characters of Johnson, Dorothy Vaughan and Mary Jackson were the first of their kind in the NASA program and real-life inspirations.

For Katherine Moore, Johnson, is the woman who defined the word fearless.

“I was very fortunate to call her my mom.”

'SHE WAS JUST MOM'

"When I think about that time in our lives, I really do think about how much she endured. In those days your parents didn't come home and tell you the bad things.”

Katherine Johnson, then and now.

Moore, Johnson’s youngest daughter, said her mom taught her and her two sisters how to sew, make buttonholes and fix the bed. Johnson was never one to make a fuss about work or life.

"She used to say it was what it was. Yes, it was segregated but we lived our lives,” said Moore. “And I guess she attributed that to her father and mother because if we had it rough, how did they have it?"

Johnson's mother was a college graduate, but her father's education stopped at the 8th grade. Her parents wanted to ensure all four of their children received an education.

At the age of 14, Johnson graduated high school and then went on to graduate from West Virginia State College at 18. She would later become the first African American female to integrate West Virginia University.

In 1953, Johnson was part of the West Area Computers, where she and others were 'human computers', performing math calculations. Three years later, her husband, James Goble, died of an inoperable brain tumor. Moore remembered her mom continuing with work and pushing her three daughters to finish their education, all while dealing with the loss of her husband.

Soon, Johnson was moved to the Space Task Force within NASA, a group made up of all white male engineers.

"I just remarked at how she carried on her life no matter what obstacles,” said Moore.

Johnson would be responsible for calculating the trajectory for the 1961 space flight of Alan Shepard, the first American in space. In 1962, NASA moved to digital computers and used them for the first time to calculate John Glenn’s orbit around the Earth. However, Glenn refused to fly unless Johnson verified the computer’s calculations.

Moore had no idea how important her mom’s work was, until she saw a life-sized portrait of Johnson at Bennett College.

“I said ‘that's my mom!’” Moore remembered. “I went straight home from the bus and went to mom and said ‘you didn't tell us!’ She said, ‘Well I was just doing my job.’"

AN IMPRESSIVE BOOK AND MOVIE

Johnson would spend 33 years with NASA, as an aerospace technologist. She worked on Apollo 11 and Apollo 13 missions and later worked on the Space Shuttle Program, before retiring in 1986.

"It was an exciting history lesson. Not black history, history," said Moore of the book.

In 2017, the book was released as a film with the same name, starring Taraji P. Henson as Johnson, Octavia Spencer as Vaughan and Janelle Monáe as Jackson. The movie topped the box office charts, received glowing reviews from critics as well as numerous award nominations.

“She was fearless,” said Moore.

Johnson, 98, attended the mini premiere held in Hampton at the Air & Space Museum where all the families of the women and Octavia Spencer attended. The NASA Leaders, families and invited guests were there for two special showings. Moore and her sister, Joylette, took it upon themselves to make sure their mom was ready for appearances for the film. Johnson lives in a retirement community in Virginia with her second husband Jim. Moore lives in Greensboro after retiring from teaching.

After watching the premiere, Moore and her sister were impressed by Henson’s portrayal of their mother.

"Taraji P Henson came up to us at the end and asked if she did all right and me and my sister were crying our eyes out saying 'Yeah, you did real good.'"

Moore said the best part about the book and subsequent movie, was the light it shined on three woman, who many may not have heard of.

"Young people today are going to see that we did contribute much more than we've ever been given credit for,”

And there's other "hidden figures" which Moore hopes people learn about after watching the film.

“There’s others who I hope their stories get told like Christine Darden and black astronauts like Leland Melvin and then there's also Yvonne Cagle,” Moore said.

In 2015, former President Barack Obama awarded Johnson the Presidential Medal of Freedom. Moore said her mom still lights up when she thinks about meeting the president.

“She talks about it and says, ‘Oh he was so nice and he kissed me on my cheek.’" laughed Moore.

The awards and recognition is wonderful, but Moore said her mom still says she was just doing her job.

"She says it wasn't work. She enjoyed every day,” explained Moore. "The one lesson to kids is find what your passion is and then do it because if you do it, it won't seem like work."

Moore teared up thinking about her mom and her legacy.

"She was a thinker because she was able to see things out there in space and then figure out how to get there before anyone else could,” said Moore. “I say her steps are ordered because for some reason she had a path and look where it took her."

Moore said she, along with her sisters and their children, enjoy math and science, but learned being fearless and passionate are things they should never keep hidden.