Doctors say the kissing bug is a silent killer. 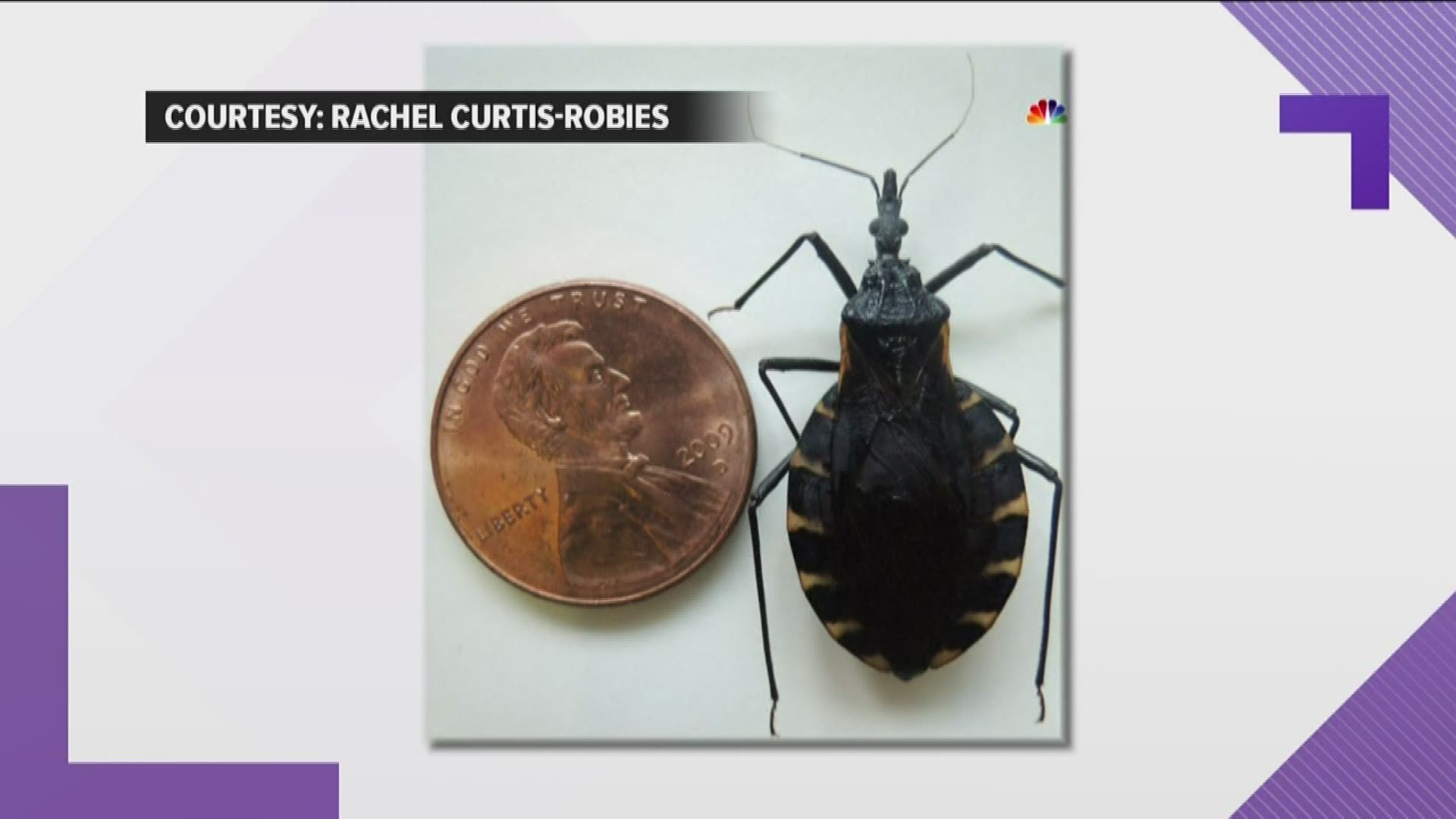 ATLANTA -- It's known as a "silent killer" and spread by a blood-sucking insect known as a "kissing bug."

It's infected millions across the world, including more than 300,000 people in the United States.

And it's continuing to spread.

Heck, you are probably reading this article because it was shared to you by someone on your Facebook newsfeed.

But we're here to tell you, that while yes, the "kissing bug" disease is real and is something to concerned about, there's no reason to suddenly panic.

What are kissing bugs and why are we talking about them now?

Triatonimine bugs are known as the kissing bugs because they tend to be bite around the face and lips. They can carry a parasite that causes Chagas disease, according to the Centers for Disease Control and Prevention.

Chagas disease causes chronic heart disease in about a third of those infected, the American Heart Association warns.

It's actually not the bite itself that spread the disease. The infection actually occurs when the insect's feces enters the skin through the bite site or the eye.

Now that the gross details are out of the way, let's dial down the fear factor when talking about kissing bugs. It should be noted that kissing bugs are not new. Chagas disease was first discovered back in 1909 and kissing bugs were likely around far before then.

There's also no real indication that it's necessarily spreading any quicker now than we first reported extensively on it three years ago. It's coming back in the news now because the American Heart Association (AHA) issued a news release this week. They said the purpose of the statement was to "increase global awareness among physicians who manage patients with Chagas disease outside of traditionally endemic environments."

And, it should also be said that even the AHA notes the "risk of infection is extremely low for most travelers and residents of endemic countries." Research indicates that it could take between 900 and 4000 bites from an infected insect for transmission to occur.

Still, some of the details of the disease ("silent killer", "kissing bugs") tend to attract a lot of attention -- and it is listed by the CDC as one of five "neglected parasitic infections" AND Chagas disease is a serious disease that's affected anywhere from 6 to 10 million people, many of whom don't know they have it. It claimed 8,000 lives in 2015, according to the Global Burden of Disease study.

And it's spread to areas not traditionally seen before in the last 40 years.

So it's worth a discussion. But there's no reason to get crazy about it.

The American Heart Association hopes to spread awareness of the disease as it notes that if it is detected early, the rate of success in treating increases.

That's what we're doing, passing along real information about something that you may have heard about from your social media newsfeed.

Where are kissing bugs found?

The bugs can be indoors or in a variety of outdoor settings.

The CDC says these bugs can live in cracks and holes indoors and in outdoor spaces including:

When they're found inside, the CDC says they're most likely to be in one of the following settings:

Doctors have previously said that the bug can be a silent killer. Dr. Anil Mangla, the Assistant Director for the San Antonio Metropolitan Health District, said a person can go as long as 20 years before the parasite takes its toll.

Symptoms often include pain in the gut or swelling where the bug bit the person.

According to Texas A&M researchers, kissing bugs range from about 3/4 to 1 1/4 inches long. Most have a "very characteristic band around the edge of the body that is striped with orange or red markings."

Their legs are long and thin -- there are no "bulging" thicker areas on their legs. They have "distinctive mouthparts that appear as a large black extension to the head."

The CDC has a section on its website on bugs that are commonly confused with kissing bugs.

How can I keep kissing bugs away from my house?

While some sprays have been successful in Latin America, the CDC says none have been specifically approved for use against kissing bugs in the U.S. The CDC recommends consulting a licensed pest control operating for those considering insecticides to fight the bugs. Roach hotels and "bait" formulations don't work against the bugs, the CDC says.

The CDC provides these precautions to prevent the bugs from infesting your house:

What are the symptoms of Chagas disease?

According to the CDC, there are two phases of Chagas disease: the acute phase and the chronic phase.

"Both phases can be symptom free or life threatening," the CDC writes.

Details from the CDC:

"The acute phase lasts for the first few weeks or months of infection. It usually occurs unnoticed because it is symptom free or exhibits only mild symptoms and signs that are not unique to Chagas disease. The symptoms noted by the patient can include fever, fatigue, body aches, headache, and rash. The signs on physical examination can include mild enlargement of the liver or spleen, swollen glands, and local swelling (a chagoma) where the parasite entered the body. The most recognized marker of acute Chagas disease is called Romaña’s sign, which includes swelling of the eyelids on the side of the face near the bite wound or where the bug feces were deposited or accidentally rubbed into the eye. Even if symptoms develop during the acute phase, they usually fade away on their own, within a few weeks or months. Although the symptoms resolve, if untreated the infection persists. Rarely, young children (less than 5%) die from severe inflammation and infection of the heart muscle (myocarditis) or brain (meningoencephalitis). The acute phase also can be severe in people with weakened immune systems, such as patients taking chemotherapy or those with advanced HIV infection.

During the chronic phase, the infection may remain silent for decades or even for life. However, some people develop:

The average life-time risk of developing one or more of these complications is about 30%."

What do I do if I find a kissing bug?

If you think you've found a kissing bug, the CDC suggests:

Please do not touch or squash the bug. Place a container on top of the bug, slide the bug inside, and fill it with rubbing alcohol or, if not available, freeze the bug in the container. Then, you may take it to your local extension service, health department, or a university laboratory for species identification. In the event that none of these resources is available in your area, you may contact CDC's Division of Parasitic Diseases and Malaria (parasites@cdc.gov) for species identification or T. cruzi testing.

I think I got bit by a kissing bug. What should I do?

If you think you've been bitten by a kissing bug or that you may have Chagas disease, it's best to consult an expert. Get with your health care provider or find a doctor who is familiar with diagnosing the disease. The CDC says you can find a clinician in your area by clicking here.

What's being done to stop the spread of Chagas disease?

In 2015, the Wellcome Trust awarded more than $5 million to University of Georgia researcher Rick Tarleton to help develop a new treatment for the disease. Tarleton's team released a study in March 2018 that detailed why some drug treatments fail.

They found benzimidazole was able to eliminate 90 percent of parasites when 48 hours, but they were not able to figure out why it didn't kill all of the parasites. They are hopeful that future research will shed more light on how to make treatment more effective.

In areas of Mexico, Central America, and South America, improved housing and spraying insecticide inside housing to eliminate triatomine bugs has significantly decreased the spread of Chagas disease, according to the CDC.