Montgomery County Councilman Will Jawando has been reading to kids on his Facebook page every day since March 18. 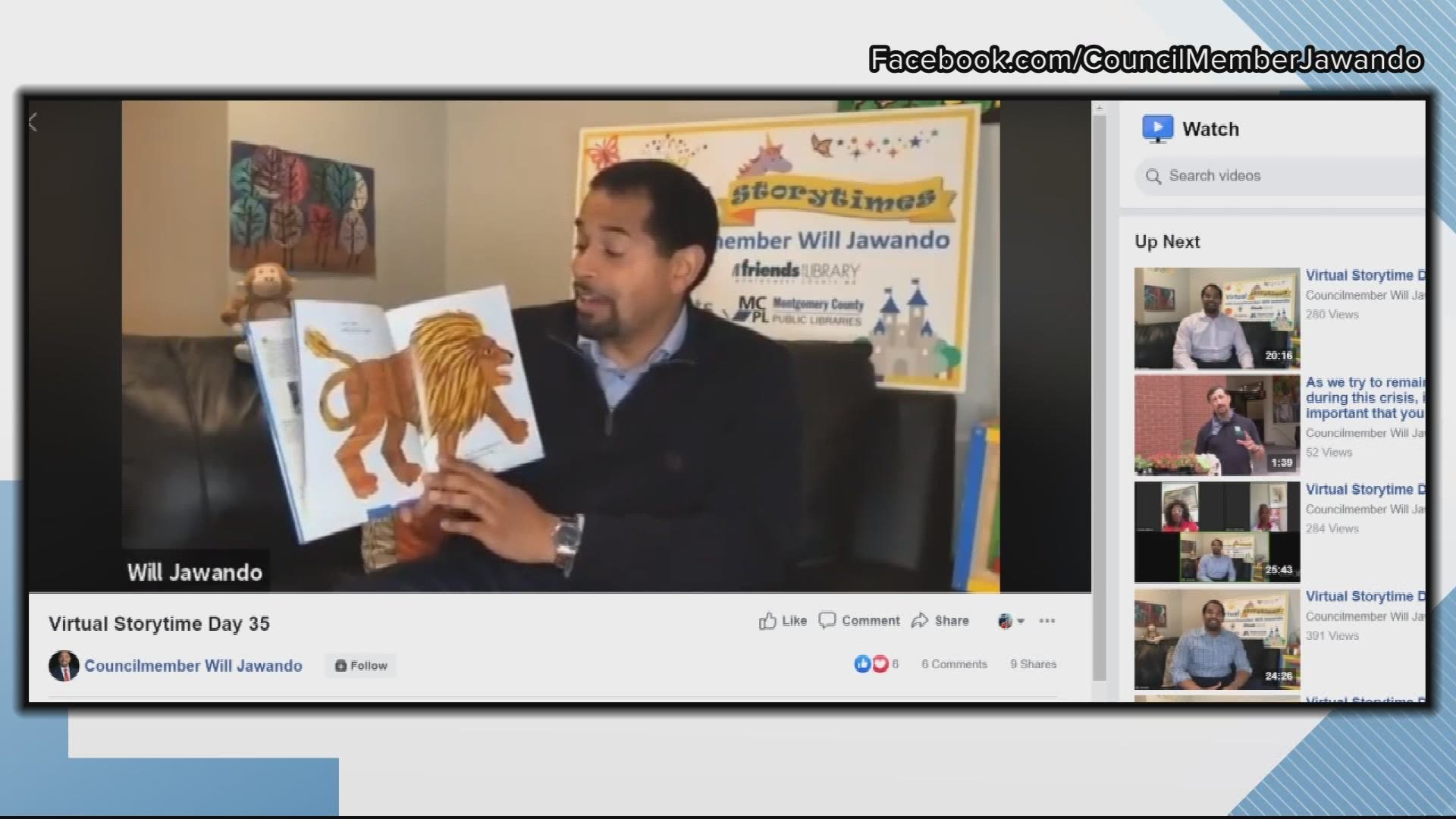 ROCKVILLE, Md. — When libraries across the country shut down at the beginning of the COVID-19 pandemic, many parents lost an outlet to provide learning enrichment for their kids.

During that first week of the state's shutdown, Montgomery County Councilmember Will Jawando reached out to the county's Library Director with an idea. He wanted to host a virtual storytime so kids and parents wouldn't miss out on the quality time they had enjoyed with the libraries.

"My job as a policymaker is to pass budgets and pass laws that help people and stop the spread of the virus," Jawando said. "This is another way that I could personally help provide a need at a critical time when its not available."

Welcome back to Virtual Storytime. Today we have a special art project courtesy of @VisArts! Please print out the coloring pages from my last post and color along!

Posted by Councilmember Will Jawando on Thursday, May 21, 2020

Being a father of four and government leader during a community crisis doesn't leave a lot of time for extra-curricular activities. Jawando, however, sees the storytime as a respite from the chaos of each day.

"I know every day I’m going to get to have some fun and read some books and bring some joy and laughter and some learning to some kids and families," he said. "So I’m getting as much out of it as I hope people watching are getting out of it."

During the storytime sessions, Jawando has hosted his own children, other council members and Academy Award-nominated "Harriet" actress Cynthia Erivo.

Please join me today at 12:30PM EST, we will have a very special guest reading with us. Cynthia Erivo, the Academy Award nominee and star of Harriet, has agreed to join us for a special edition of Virtual Storytime.

Posted by Councilmember Will Jawando on Friday, May 15, 2020

"Our libraries are so important -- they’re community hubs," Jawando said. "They're on the front lines of employment, of learning and early literacy and in this case, in child care and development. I was really disappointed as a parent, but also as a policymaker that they were going to be closed realizing they needed to to keep people safe and I just said we have to fill this void."

The storytimes are being done in conjunction with Montgomery County libraries and librarians choose the books being read, Jawando said. Rockville arts center VisArts is also a partner in the effort. Jawando leads art projects on Fridays.

"Its really two goals," Jawando said. "To keep the literacy and early learning going and also to give parents a break during what is obviously a very difficult time."

RELATED: Dolly Parton will be reading bedtime stories for your kids on Thursdays