VERIFY: Yes, all of the COVID-19-causing coronavirus in the world could fit in a soda can

The mathematician who calculated whether all the coronavirus that causes COVID-19 could fit in a single soda can broke it down step-by-step. 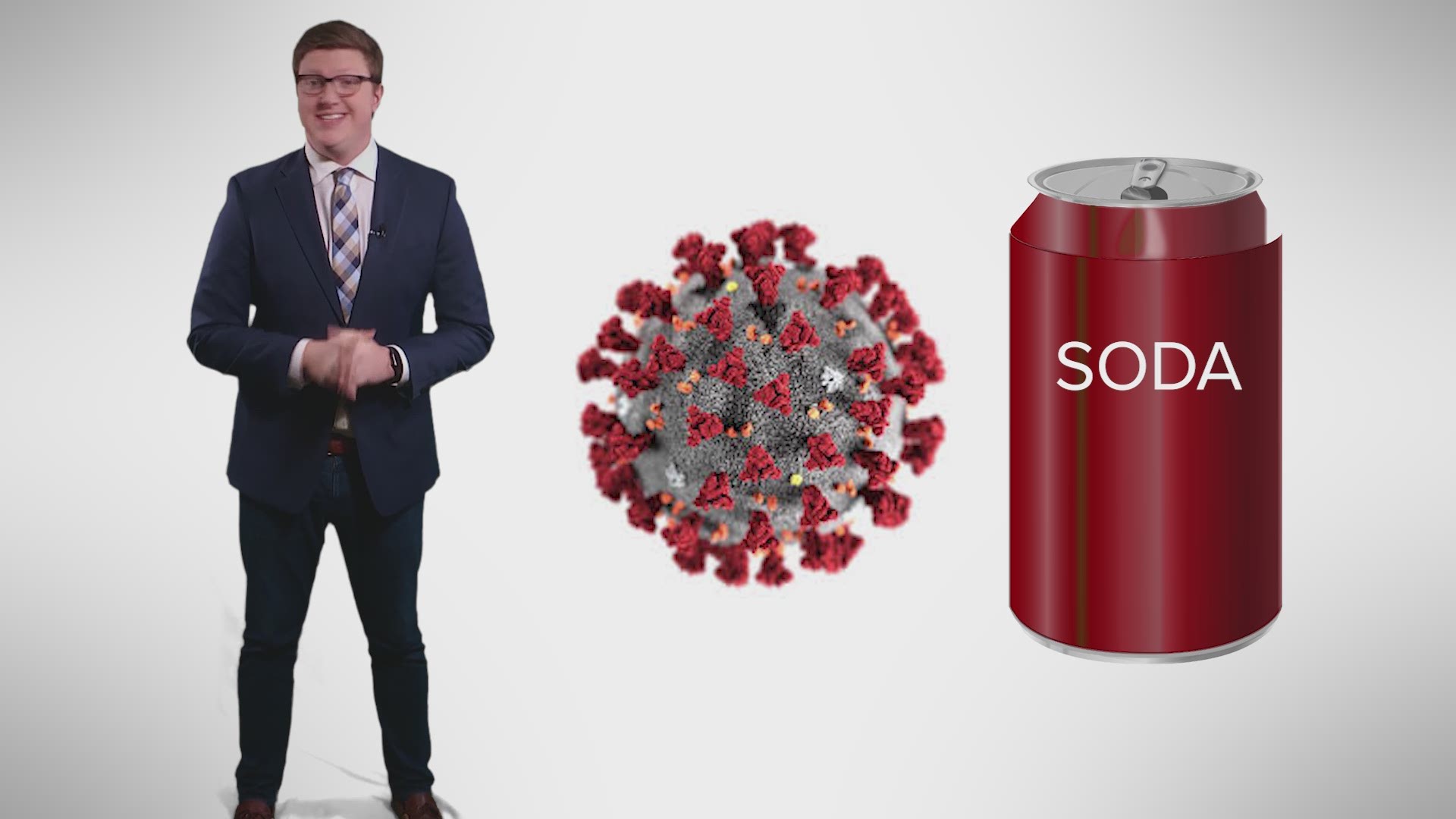 Lately, some people have tried to put into perspective how much SARS-CoV-2, the virus that causes COVID-19, there is in the world. And now people are claiming all of it currently out in the world could fit in a single soda can.

That has some wondering two things: is it true and just how much is that really?

Can all of the COVID-19 virus in the world fit in a single soda can?

Yes. The mathematician who calculated this even broke down step-by-step how he did the math.

WHY WE ARE VERIFYING

This claim that all of the SARS-CoV-2 in the world is about 160 mL is being made on viral posts across different social media platforms and in various headlines. Posts like the one below add a visual element to it, showing it could all fit in a single soda can with room to spare.

RELATED: VERIFY: Wear two masks and know the tricks to a snug fit to stop COVID-19

RELATED: VERIFY: Yes, you should still get a vaccine if you've already had COVID-19

The claim comes from a February 10 article written by Christian Yates, a mathematician based in the United Kingdom. He is a senior lecturer of mathematical biology there and shows up in the university’s directory.

He estimates that there is about 120 mL of SARS-CoV-2 in the world right now which would actually fill a space of 160 mL because spheres like the virus leave lots of open space when packed together. Yates has to do a lot of estimation on the way to that total because there’s a lot that plays into it that scientists don’t have an exact number for, yet.

First of all, he needed to get a total number of people currently sick with the virus. That isn’t tracked, so the next best thing is to estimate based on daily, newly confirmed cases. Our World in Data shows a bit less than half-a-million confirmed cases per day but estimates in the millions from the Institute for Health Metrics and Evaluation (IHME) because of lapses in testing and asymptomatic cases. Yates rounded up IHME’s number in his calculation and estimated viral load per person there.

He then took a study on viral load ranges for COVID-19, kept in mind that people at different stages of the disease have different levels of viral load and went with a number in the middle. When he combined that with estimates of how many people should have the virus at any one time when you keep daily new cases constant, he estimated there are 200 quadrillion (that’s a two followed by 17 zeros) in the world at any one time.

Yates works out the volume of these particles from the diameter using a common formula and finds that these many virus particles equal about 120 mL. But if you were to pack them all together, they would take up a larger space because spheres leave a lot of open space. He said if you use the most efficient packing method possible, they would take up a space of 160 mL.

A typical can of Coca-Cola is about 12 fluid ounces, which is just under 355 mL. That means all of the COVID-19 virus particles in the world take up less than half of a can of soda.

And while his calculations are based on estimates, he often went high instead of low. So it’s more likely the true total amount of virus particles in the world is a bit smaller than the number he ended up on. So even if his estimates are off, all of the virus particles would still fit in a soda can and likely fill it up even less.