An Advisory Neighborhood Commissioner has pushed for the move after data showed three times as many seniors on Capitol Hill have gotten shots than in Hill East. 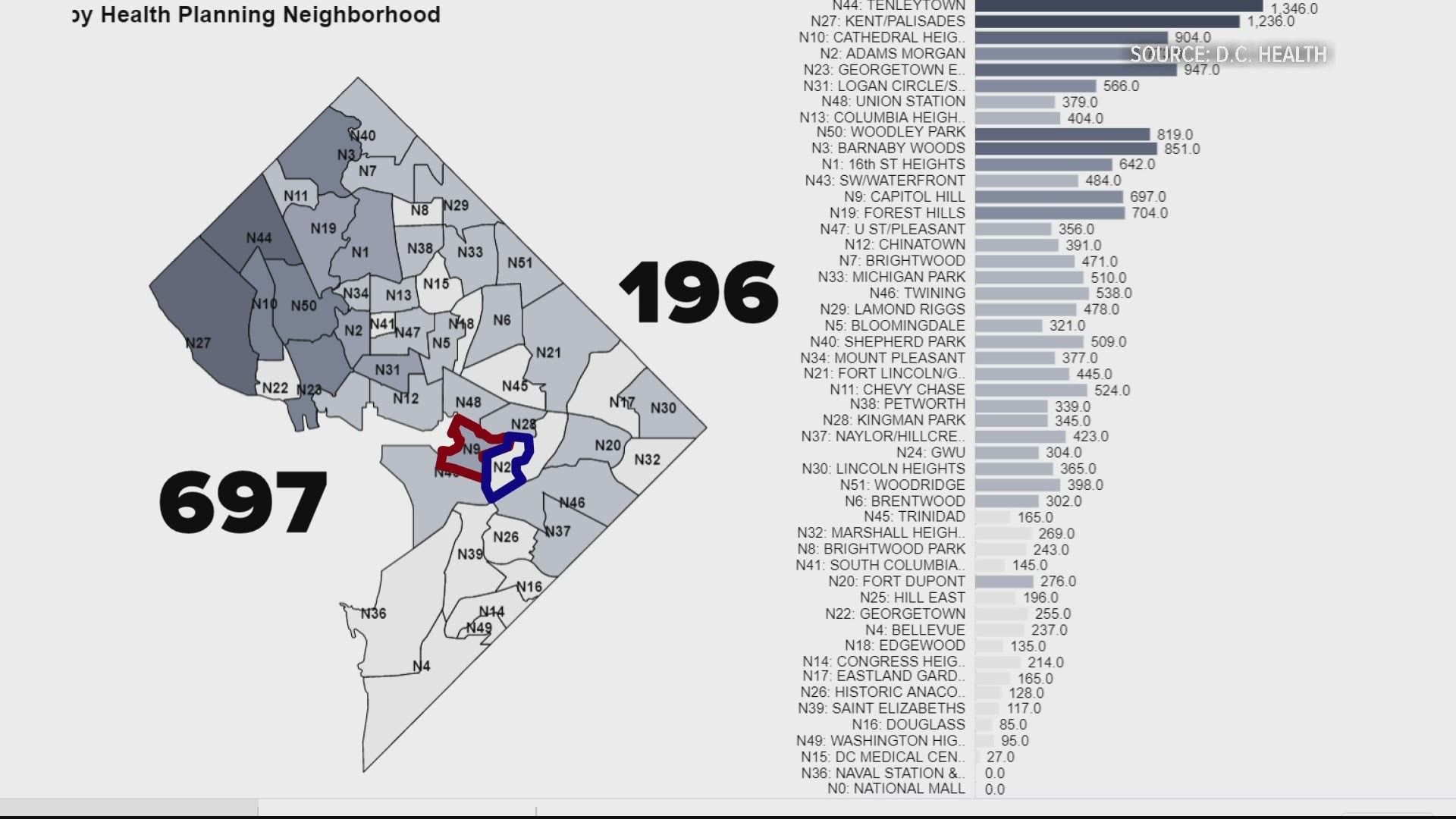 WASHINGTON — After weeks of neighbors advocating, D.C. is adding a Ward 6 zip code to the vaccine priority list this week, according to Councilmember Charles Allen.

For the past month, D.C. has been releasing some of its weekly round of vaccine appointments based on priority zip codes -- which have focused on wards 5, 7 and 8.

Ward 6 falls in the middle of the pack when it comes to the number of COVID-19 cases it's reported to date.

The zip code now added to the list -- 20003 -- encompasses the southeastern portion of Capitol Hill, Hill East and Navy Yard.

To date, D.C. Health data reports 5,454 coronavirus cases in Ward 6. Capitol Hill residents account for 492 of those positives, and Hill East has had 513.

However, D.C. data shows a disparity in each of those neighborhood's vaccinations. According to data last updated on Saturday, 697 adults 65 or older who live in Capitol Hill have been fully vaccinated. That's more than three times as many older adults in Hill East, which has 196 residents fully vaccinated.

#NEWS for Ward 6 neighbors: 20003 will be a priority zip code for #vaccines this week - @charlesallen confirms.@Alison6B09 has been pushing for this for weeks - after seeing 3x as many 65+ residents getting vaccinated in Capitol Hill vs. Hill East. More on @wusa9 at 11. pic.twitter.com/cXitq1CZiT

For the past few weeks, Horn has been advocating to Allen, her councilmember, to focus more vaccine efforts on Hill East.

A spokesperson for Allen said, in turn, that he has been pushing D.C. to prioritize the neighborhood -- and if they can't narrow it down that much -- to add its zip code 20003 to the list.

He confirmed D.C. Health shared Wednesday that 20003 will receive priority this week since Hill East is so far behind.

"I'm hoping it will help," said Annette Kenner, who's lived in the neighborhood since she was 7. "There are a lot of seniors in our neighborhood... who probably have not had it [the vaccine] done. And I don't think there's anyone who's coming around to them. A lot of them can't get out and... some of them probably don't have transportation to get to, some are sickly," she said.

Horn thinks being added to the priority list will make a big difference in getting more adults 65 or older in her district vaccinated -- but she hopes to see more outreach from the city to raise awareness.

"For folks who don't receive their news through the internet, or may lack internet access, there haven't really been efforts to reach out to folks," Horn said. "A mailer would help, I think, even tear-off flyers or you know, people walking now that the weather is nicer, you may see more folks outside. So I would love to see more safe outdoor door-to-door outreach."

She said the new preregistration system has gone smoothly so far for her constituents -- so that makes her optimistic. In the near future, however, Horn hopes that D.C. will be able to target vaccines to specific neighborhoods instead of just zip codes.

Allen has said in tweets, and in an email update Horn shared on Twitter, that he agrees zip codes are too broad.

He said that change should come in a week or so.

Really pleased to see that in his latest email update, @charlesallen takes note of the vaccine rate disparities btwn the Eastern & Western halves of 20003. I look forward to working with him & his staff to get more of our Hill East residents, particularly our seniors, vaccinated. pic.twitter.com/JlTFxYfQqD

Another suggestion Horn has is to leverage the ANCs who are engrained in communities throughout the city. She said so far, the mayor's office hasn't really reached out to her or other commissioners to help reach populations most in need of the vaccine.

"There are community leaders as well, and other neighborhoods who would probably be willing to do the outreach themselves if they had some additional tools and resources from the government," Horn said.

For now, both Horn and Kenner plan to keep going door-to-door to check on their neighbors -- and make sure they have access to the vaccine.