'This is not jail. This is the cemetery. We're just waiting to die.' | DC inmates & officers speak out 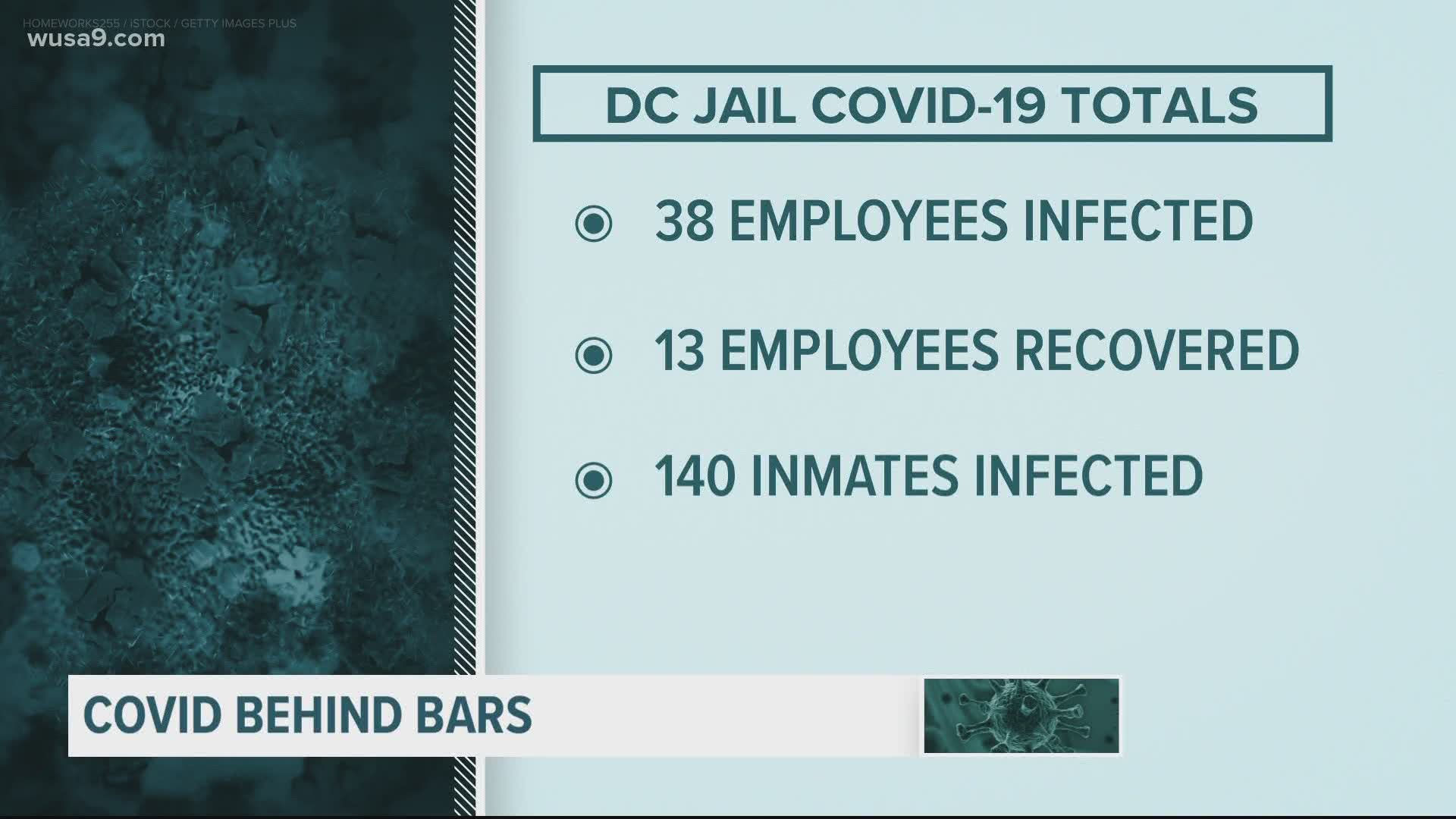 WASHINGTON — A COVID-19 outbreak inside the D.C. jail hasn't stayed behind the facility's walls.

Inmates are getting jail employees sick – and those employees are doing what they can to keep the virus from spreading to their families and our community. But the virus spreads indiscriminately, and it has turned the D.C. jail into a coronavirus hot spot.

Even after federal court action, inmates and guards keep coming to WUSA9 pleading for more action to keep them safe.

"Officers are becoming sick and left on post for more than 26 hours. Officers are afraid to come to work," said D.C. jail corrections Sgt. Jannease Johnson.

WUSA9 asked Johnson to record a video diary after putting in a whole day’s work. Johnson chose to live away from her family, afraid she might come down with COVID-19 and infect them.

"[Officers are] forced to use their own sick leave, putting their families at risk while they quarantine," Johnson said.

One of Johnson’s co-workers, a jail case management assistant, died of COVID-19, according to the D.C. Department of Corrections. On April 5, that employee posted on Facebook: “Calling on all prayer warriors. In the hospital with COVID-19 and pneumonia. I’m trying not to stress.” She died the next week.

Roberta Moore's son Darin is an inmate at the jail. He's contracted coronavirus while he's awaiting trial. WUSA9 asked Moore to share a video diary of how she’s been feeling:

"I feel disheartened and I feel helpless. If the shoe wasn’t on my foot, I wouldn’t be as concerned," she said. "But now that I have this experience, I realize that regardless of whether it’s your family member, your child, that they’re human and the conditions in the D.C. jail are inhumane."

WUSA9 talked to Darin Moore by phone when he called his mother.

"The air is very thick. Right now, due to the coronavirus, I lost my smell, so I can’t smell anything, but it’s just thick," Moore added, "I just feel like I’m going through it alone. I’m in this cell and I sleep the majority of the day."

Jail inmates have an open "unencumbered" space of 6.6 feet x 6.6 feet to walk around in their cell. It’s almost impossible to maintain social distancing of at least 6 feet when inmates have to share that space with another inmate.

To be clear, Darin Moore is in the D.C. jail because he’s charged with murder. In public opinion, Moore may not be the most sympathetic character. But he is still innocent until proven guilty. Moore’s trial was supposed to begin April 20 – around the same time his family says he was infected with coronavirus.

The most recent COVID numbers out of the D.C. jail as of April 29: 39 employees currently out sick, with 13 recovered. Officials say 135 inmates have tested positive for the coronavirus, while more than half of all inmates are on quarantine. WUSA9 has tracked those numbers and they’ve been tripling every week.

Letters we’ve obtained from inmates inside the D.C. jail through April paint a disturbing picture: One inmate writes of “coughing up blood for two days” and not being able to see a doctor despite several requests. Another inmate who works in the kitchen writes that other inmates are coughing while also working serving food.

Those letters formed the basis of an ACLU lawsuit. A federal judge agreed to send independent inspectors, who confirmed many of the inmate complaints and ordered changes. But inmates and guards say D.C.’s Department of Corrections hasn’t provided enough support to keep people behind jail walls safe.

As Darin Moore slowly recovers from COVID-19, he remembers another inmate who died of the virus while awaiting trail, just days after D.C. DOC denied his court appeal for medical release.

When asked what he would say to Mayor Muriel Bowser, Darin replied, "I would say they need to have some type of inspection and fix this thing. I feel this is not jail. This is the cemetery. We’re just waiting to die."

Jail guards say inmates are protesting. They break the rules by keeping their hands through food slots in their cell doors. Guards report having to pepper spray protesting inmates.

Shantal, a mother of a D.C. jail inmate infected with COVID-19 who declined to give her last name, spoke with a group of activists protesting outside D.C. jail. Speaking of the corrections officers, Shantal said of her son, "They mace him. They don’t get no showers. My son just had a shower yesterday and he had no shower since Tuesday. He keeps calling me all night long. Only perk of being in the unit with coronavirus is that you get to have a phone."

WUSA9 asked D.C. Department of Corrections Director Quincy Booth for an interview. His office declined, pointing us to Bowser’s news conference statements, including: "Right now, our DOC and our emergency operations center are working together to deploy medical volunteers to our DOC facilities to assist with the monitoring of staff and residents for symptoms of COVID-19."

The mayor also announced that Clinton Lacey, D.C.’s Director of Youth Rehabilitation Services, and not the Department of Corrections director, will lead a new effort to improve the D.C. jail’s coronavirus safety. Bowser pledged experts would provide additional deep cleaning and inmates in isolation would get daily showers.

Roberta Moore believes she’ll be able to hold her son Darin after he’s found not guilty. That’s up to a court trial postponed indefinitely because of the pandemic. Until then, all she can do while quarantined is wait for her son’s calls – bearing messages of life and death struggles against coronavirus.

WUSA9 compared COVID-19 infection rates in DC compared to prisons in Maryland, Virginia and beyond. An analysis by WUSA9 digital investigative journalist Jordan Fischer using nationwide data compiled by UCLA Law found that Maryland and Virginia prisons are below the national average in COVID-19 inmate infections.

D.C.'s single jail facility has an infection rate of more than 90 cases per 1,000 inmates. Comparing D.C. to states can be misleading – Virginia and Maryland, for example, have multiple detention facilities, many located in less densely populated areas, which means an outbreak in one facility won't necessarily spread to the state's whole incarcerated population. The numbers for D.C. are included in the visualization below for reference purposes only.