‘They can’t possibly think that this will work’ | Teachers, staff at DOD schools worry about starting year in person

While most schools in our area are starting the year virtually, if your child goes to a local DoD school, they'll be learning in-person. 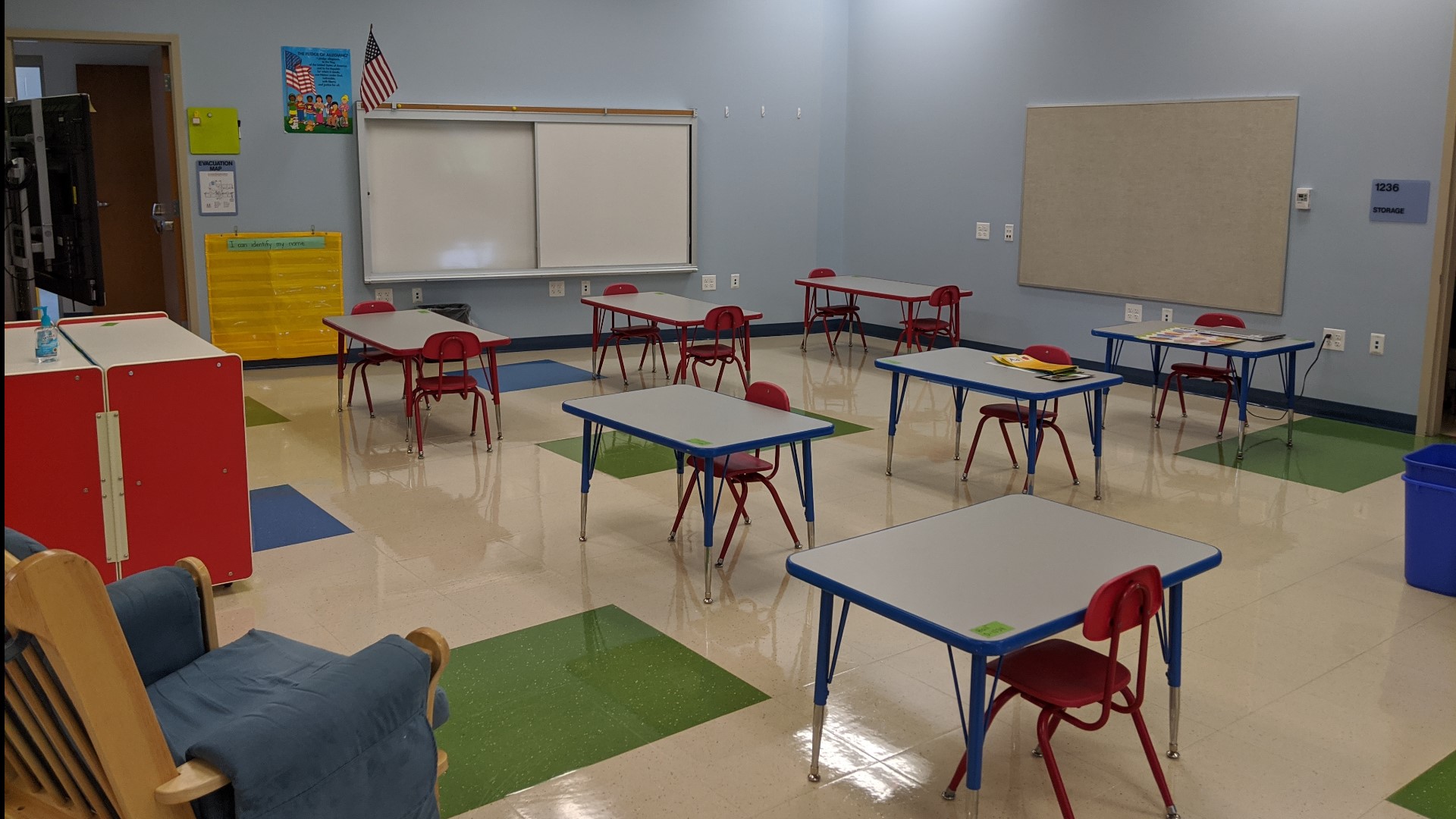 QUANTICO, Va. — UPDATE: One week into starting the school year in-person, officials at Crossroads Elementary School on Quantico Marine Corps Base have decided to transition to remote learning. The move comes as someone at the school is “presumed positive for COVID-19,” according to a message from the school.

“As a result of this positive case and quarantine requirements for key staff, our school building will be closed to students beginning tomorrow and we will transition to remote learning on Thursday, September 3rd,” the statement read. “I anticipate that we will be in a remote learning status through September 14 and resume in-person classes on September 15. Out of an abundance of caution, the school building will undergo a thorough cleaning and disinfecting...”

The combined middle and high schools on Quantico closed temporarily after the second day of school. An alert sent out that night said someone at the school tested positive for COVID-19.

Credit: WUSA9
Officials sent out this alert about a positive case of COVID-19 at the combined middle and high schools on base.

This news comes after school staff reached out to WUSA9 with concerns about starting the school year in-person in the middle of a pandemic. 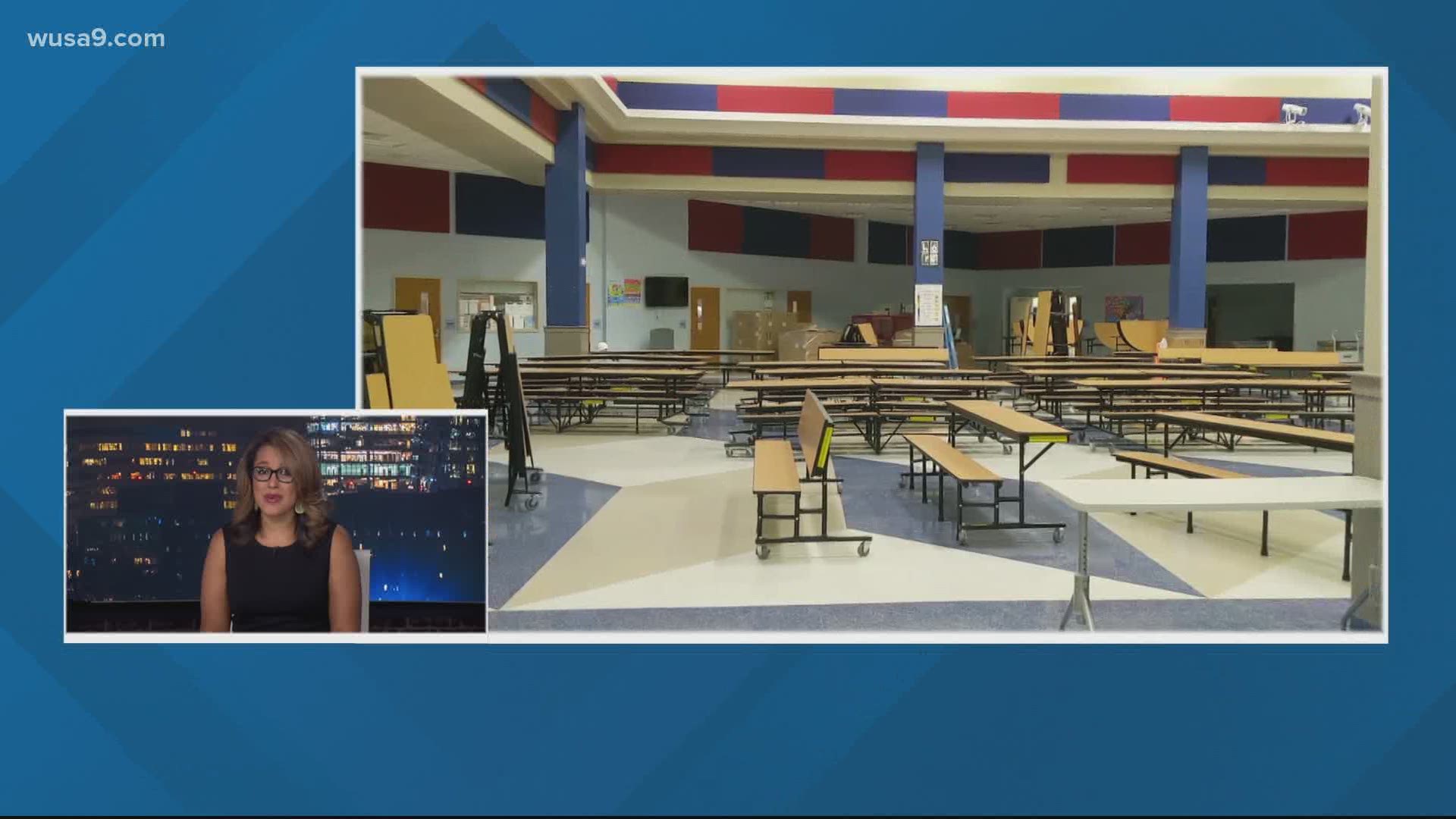 April McCarthy, who works at a Department of Defense-run elementary school on Quantico Marine Corps Base, felt she had no choice. She had to speak up after hearing about the death of a Quantico daycare kitchen worker.

Chai Suthammanont died after catching COVID-19. His wife is concerned about the conditions on base during this pandemic. For McCarthy, the death hit too close to home.

“Knowing that that happened made me feel that I needed to do something,” McCarthy, who is a teacher’s aide at Crossroads Elementary, said.

Crossroads is one of a few local schools run by the Department of Defense Education Activity, or DoDEA. In our area, they can be found on Quantico and the Naval Support Facility Dahlgren in King George County, Virginia. These schools are about to return to in-person learning during a pandemic. The decision to re-open is based on the health conditions at each base. When they reopen, there will be hundreds of military kids, teachers and staff in these buildings.

“I'm afraid for my staff members, my students and their families, my family,” McCarthy said. “We want to be in school. We want to see our students. We haven’t seen them in a long time, and we want to see how they’ve grown and we miss them. We have strong connections with our students, but we don’t want to get sick. I don’t want anyone... I don’t want to read an article about a DoDEA teacher that passed away in a month, in two weeks.”

Officials would not let our crews take video at Crossroads. A spokesperson said they are limiting who comes into their buildings because of COVID-19. They sent us a few photos to use.

Staff at the school, who didn’t want to be identified because they fear for their jobs, sent us pictures and video. They wanted to make sure the public sees what the setup will look like. In those pictures, the tables are spread apart. That's one of the precautions, DoDEA Director Thomas Brady said they are taking in re-opening. They also include social distancing, a requirement to wear masks, modified hallway traffic, school bus schedules and lunches, and increased cleaning.

Officials told WUSA9 they're trying to put together a safe environment that's conducive to both learning and keeping people healthy.

“We would not begin to open unless I was convinced and all the professionals in this organization were convinced that we were putting no child in harm’s way,” Brady said during a Pentagon briefing.

But, according to the Federal Education Association, the union representing these school employees, 95% of those surveyed believe it will be “somewhat difficult” or “very difficult” to implement these practices.

Credit: FEA
The FEA surveyed its members about returning to in-person learning

Barbara McDaniel is another teacher's aide at Crossroads. She works with special needs students. She doesn’t believe her students will be able to wear masks all day.

We asked McDaniel if she thinks she can do her job and socially distance.

“I guess I can try, and that's what I'm going to end up doing is trying because it's going to be very difficult,” she said.

We also wanted to know if the additional precautions officials say they’re taking alleviate any of her concerns.

“If I felt like it was really going to happen, yes,” she said. “But I just, I don't have a good feeling.”

Officials maintain that Quantico schools have sufficient janitorial staff for the increased cleaning, but sources provided WUSA9 with these slides from a Crossroads training. They show some of that work will be left to teachers and staff.

“We're not expecting our teachers to be custodial workers,” Brady said. “We're taking the proper planning to make sure that that's not part of their process, but there are areas that they will, and they've been instructed to do that.”

Brady told reporters, “...the best education is face-to-face in a classroom, and so our priority is to open every classroom that we can safely.”

Looking at the bigger picture, half of the DoDEA schools in the Americas will start the school year in person; the other half will begin remotely.

Parents, who are still worried, have the option of moving their kids to virtual learning. When it comes to teachers, a letter from Crossroads administrators said only a handful of them are making that switch. Aides and other staff are allowed to request “reasonable accommodations,” or exemptions to working in-person, but April said there weren't a lot of details about how that would work. DoDEA reports they're still going through those applications.

Meanwhile, public schools nearby, including in Prince William County where Quantico is located, have decided remote learning is the way to start the year.

“I had hoped we would follow suit,” April said.

A Crossroads teacher, who asked to remain anonymous, wrote to WUSA9 about the concerns.

The email closes with this: "I will be there with a smile behind my mask that shines through my eyes. But my heart will be heavy as I wonder whose lives we will be putting at risk."

RELATED: Here's what the fall semester will look like at colleges in the DMV