'Coronavirus discrimination' against Asian Americans happening across country, including in DMV, report says 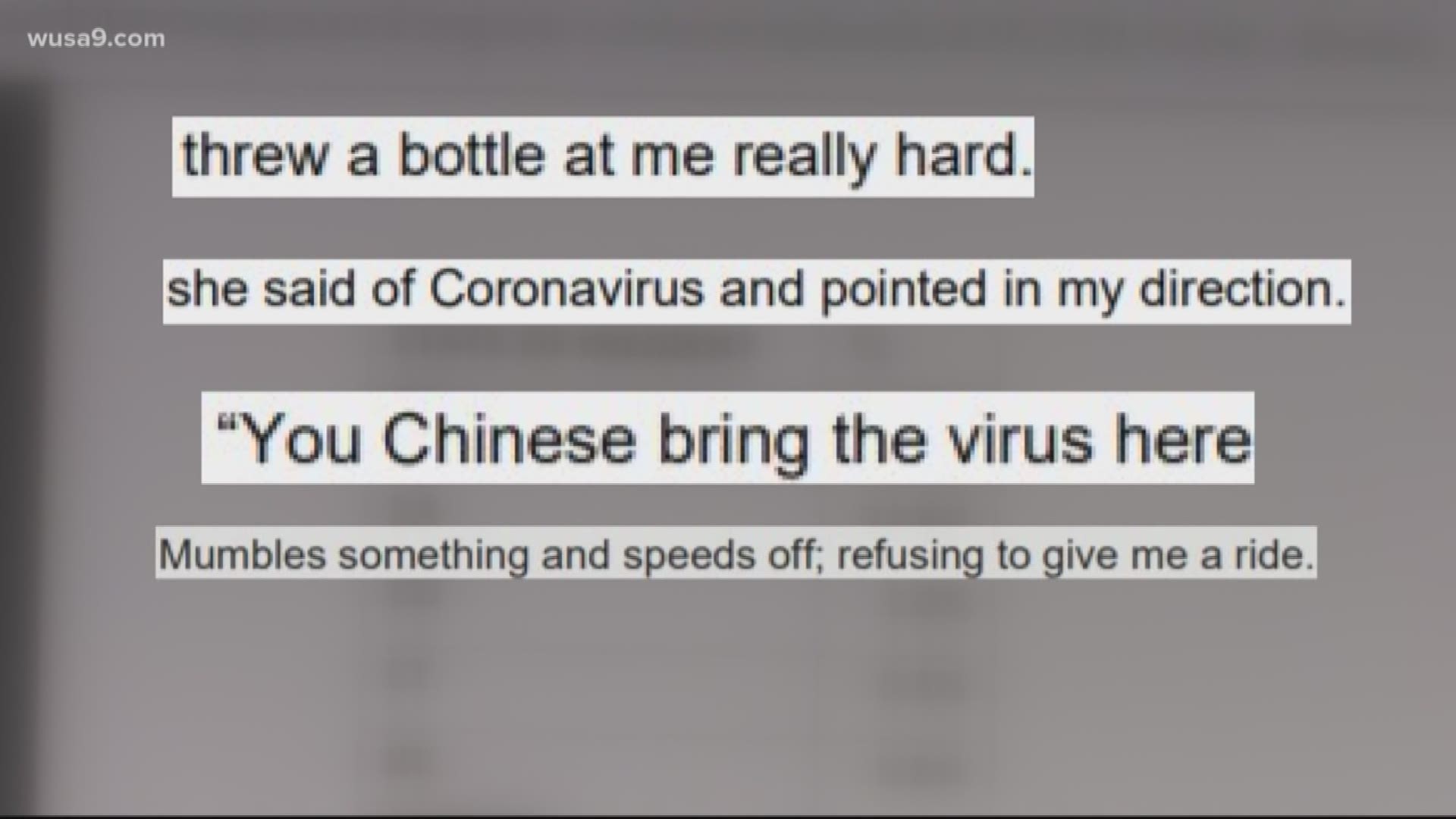 WASHINGTON, D.C., USA — At least 750 alleged racist or xenophobic incidents against Asian Americans have taken place across the country since March 18th, according to a new report released the Asian Pacific Policy & Planning Council.

Last week, the group started an online database of reports sent in from Asian Americans who say they've encountered harsh treatment in public, at work, online or at school.

At least 10 incidents have been reported in in Washington, D.C., Maryland and Virginia.

Manju Kulkarni, a member of the Asian Pacific Policy & Planning Council who helped oversee the report, said many of the incidents in the DMV took place on public transportation or at metro stops.

"While it may not be as high as some other parts of the country, it’s still concerning," she said. "It is a concern for their safety and for their well-being as they’re just trying to live their daily lives.”

The report included some of the stories sent in by the people who claimed to have experienced racism or xenophobia.

"Two separate Uber drivers would not pick me up due to my race," one person wrote. "Each time, the driver would arrive, look at me, and speed off quickly to cancel the ride a minute later. The second driver had a face mask on and slowed down enough to look at me and shake his head and wave a hand at me rejecting the ride."

Others wrote of feeling threatened or intimidated by others while out in public.

"Young 'white' girl told her parents she was going to 'die' (repeatedly) and her parents asked why?" one of the entrees read. "She said 'of coronavirus' and pointed in my direction."

"As I was walking to my bus, a white, middle-aged man screamed at me to 'wear a respirator' because I'm Asian," another person wrote. "When I was on the bus, a middle-aged woman sitting across from me kept staring at me while holding a rosary in front of her. After a few minutes of this, she moved a few seats away from me while maintaining eye contact with me."

According to Kulkarni, the report helped shine a light on the issues some Asian Americans are experiencing as the coronavirus spreads.

"It’s not simply individuals who identify as Chinese who are being targeted. More than 60% of the individuals who responded are not Chinese Americans," she said. "Some people are allowing their biases and racial animus to get the better of them."

According to statistics compiled from the database, 67.3% of the alleged incidents involved verbal harassment.

Almost half of the incidents took place at a business, with almost 75% of the victims being women.

The database began compiling the records shortly after President Donald Trump first referred to the disease as the "Chinese virus."

While the president later said he would stop using the phrase, Kulkarni said it was important for leaders to help bring an end to the alleged treatment.

"While we understand that the disease did start in Asia, all humans get diseases," she said. "We know it’s expanded greatly throughout our planet.”

Due to some of the alleged incidents not involving official crimes, Kulkarni said it was difficult to compare the current situation to the past.

However, moving forward, she said it was important for the public to become aware of the issue and help bring a stop to it.

"Take this to heart. Read the report. Look at it. Understand what our fellow citizens are going through," Kulkarni said. "I think when people realize what’s going on, they’ll realize this is not acceptable.”