Maryland opens new mass vaccination site registrations; governor calls it a 'light at the end of the tunnel'

WALDORF, Md. — Maryland Governor Larry Hogan called the state's newest mass vaccination site at the Waldorf minor league baseball stadium a "light at the end of the tunnel" as he reflected on the one year anniversary of his declaration of a state of emergency due to the coronavirus pandemic.

"That evening we had discovered three cases. People had returned from a Nile River Cruise and were infected," Hogan remembered.

"And we knew we were at the beginning of a crisis situation. I immediately declared a state of emergency that day."

"It's just been an unbelievably difficult year for everyone, but I just want to say that we are seeing the light at the end of the tunnel with these vaccines coming," Hogan said.

Today I toured the new @FEMA-supported Southern Maryland mass vaccination site located at the @BlueCrabs’ stadium in Charles County. The site opened yesterday—one week ahead of schedule—and 15,000 appointments for the site have already been booked. #GoVAXMaryland pic.twitter.com/np7b5KumsK

The site, which launched Thursday, is run by the Federal Emergency Management Agency, which was invited in by the state of Maryland.

Emergency workers have come from as far away as Oregon to assist, according to a FEMA spokesman at the site.

FEMA is providing $220 million to support vaccination in Maryland, the agency reports. 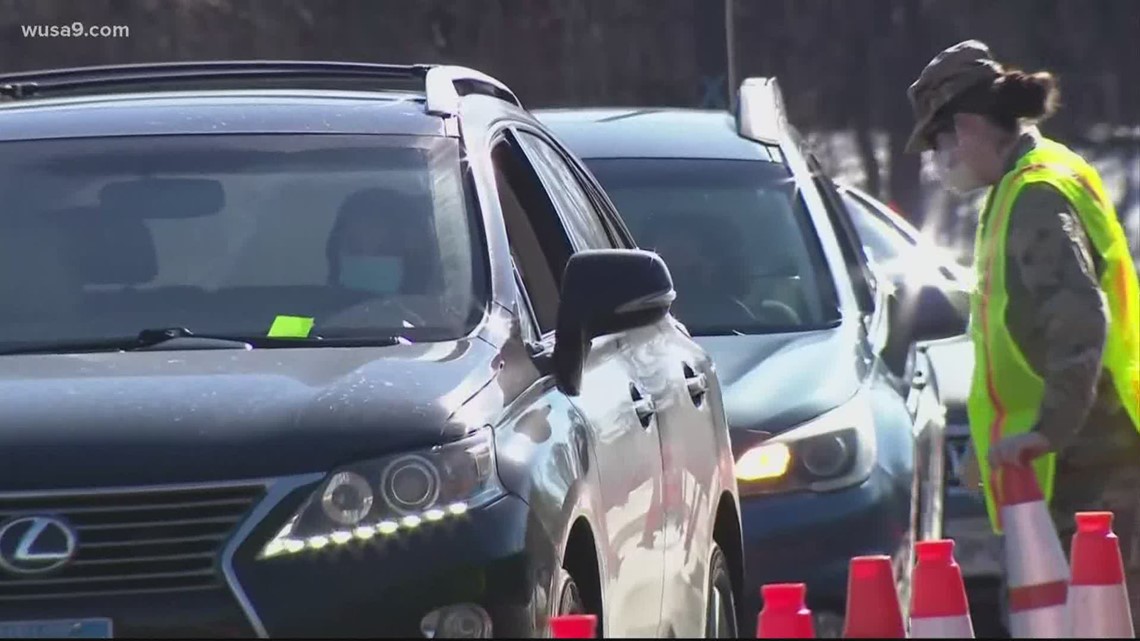 Despite being managed by FEMA, Marylanders can receive appointments through the state's telephone hotline at 1-855-MD-GO-VAX, which is 1-855-634-6829  or by going online at covidvax.maryland.gov

The Waldorf site is providing the new Johnson and Johnson single-dose vaccine.

500 shots were scheduled Friday, but the FEMA site has the capacity to provide 6,000 vaccinations a day once vaccine is available in larger volume, authorities told Hogan.

Maryland residents lined up for vaccinations were eager.

“I don't care if it's FEMA or the state, I just want to get vaccinated," said Maryland resident Brian Crawford, an education system worker.

“I'm just very grateful FEMA is here,” added Marjorie Thorstreraten, who said she drove 85 miles from her home in Westminster, Maryland after receiving an appointment at the Waldorf site.

Hogan called the FEMA site an example of the infrastructure being built as soon as possible so that when more vaccine starts flowing there will be no delay getting it out.