As first doses of Eli Lilly's antibody reach Maryland, hospitals ask people not to give into 'COVID fatigue'

The Maryland Hospital Association says the state's health care system is feeling the pressure, but not panicking. 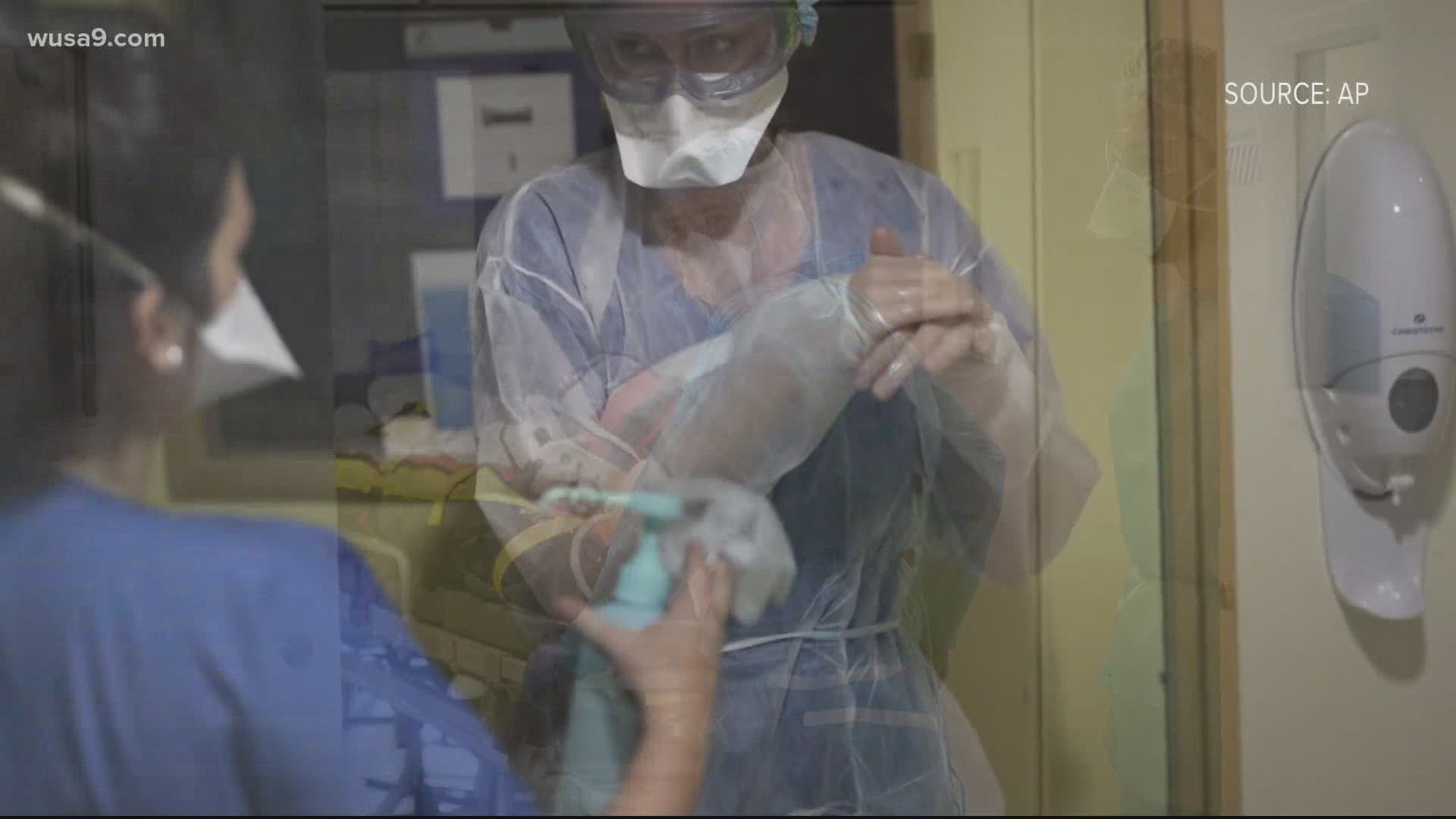 ANNAPOLIS, Md. — Maryland hospitals are battening down the hatches and looking everywhere they can for the extra staff needed to respond to the ongoing surge of coronavirus cases in the state. The one thing they’re not doing, Bob Atlas said, is panicking.

“The pressure is definitely there. It’s being felt,” Atlas, the president and CEO of the Maryland Hospital Association said. “Nobody is panicking, but the concerns are very real – especially for the frontline workers who have to deal with all the patients, no matter what condition they’re in.”

Atlas spoke with WUSA9 on Thursday about the slate of new restrictions Maryland Gov. Larry Hogan imposed earlier in the week on hospitals, nursing homes, bars, restaurants and other businesses in an effort to curb skyrocketing case numbers.

RELATED: 'Maryland is in the red zone' | Gov. Hogan rolling state back to Phase 2 capacities as coronavirus cases surge

For hospitals, those restrictions mean visitation is severely limited, a new surge order allows them to transfer patients to other facilities in order to free up as many acute and critical care beds as possible, and the Maryland Department of Health is recommending they limit elective surgeries as much as possible.

That last point is a different tactic than the one the state employed earlier in the year, when elective surgeries were stopped outright.

“Our governor saw what happened in the spring when he ordered a shutdown on elective surgeries – and let me say, elective doesn’t mean optional, we’re not talking about cosmetic surgery, they’re just surgeries that happen to be scheduled but they’re very important to people’s health,” Atlas said. “So the governor has left it up to each hospital system to figure out how to handle that.”

Another difference from the first wave of the virus: now there aren’t backup divisions of health care workers who can be brought in from other states where the virus is less severe.

“Whereas earlier in the year we were able to meet staffing needs by bringing in temporary staff, sometimes from other states where the crisis wasn’t as bad, now the crisis is nationwide,” Atlas said.

One point that Hogan addressed on Tuesday that Atlas repeated was that hospitals were able to offset some of the losses and unexpected expenses from the first wave of the pandemic due to the CARES Act. But eight months later, Congress was expected to enter its Thanksgiving recess with no second relief package in sight. That has some worried that restricting elective surgeries again could force hospitals into layoffs to stay afloat.

“There is not another such pot of money on the horizon, and so hospitals everywhere are looking at how they make sure there’s the income to make their doors fully open and their staffs fully at work. I think our hospitals have good judgment with that, and we’re not concerned there are going to be layoffs with this round in Maryland.”

Atlas did have some positive news to offer from the ground in Maryland. He said he believes hospitals are well-supplied with PPE to meet their current needs, and also noted that doses of Eli Lilly’s neutralizing antibody bamlanivimab, which was approved by the FDA for emergency use last week, are beginning to arrive at four distribution sites around the state. The drug will then be parceled out to individual hospitals for the most high-risk patients.

Atlas said he was worried about the upcoming Thanksgiving holiday, however, and what it would mean for cases in the state. After WUSA9 spoke with Atlas Thursday, the CDC released new guidance advising Americans to avoid traveling for Thanksgiving this year. It was a refrain of the last thing Atlas said in his interview.

“I’m going to say something that sounds like it’s been said a million times before, because it has: This will all stop being a crisis for our health care facilities if people will stay away from each other and wear masks when they’re close. It works,” Atlas said. “And COVID fatigue isn’t an excuse to give up.”