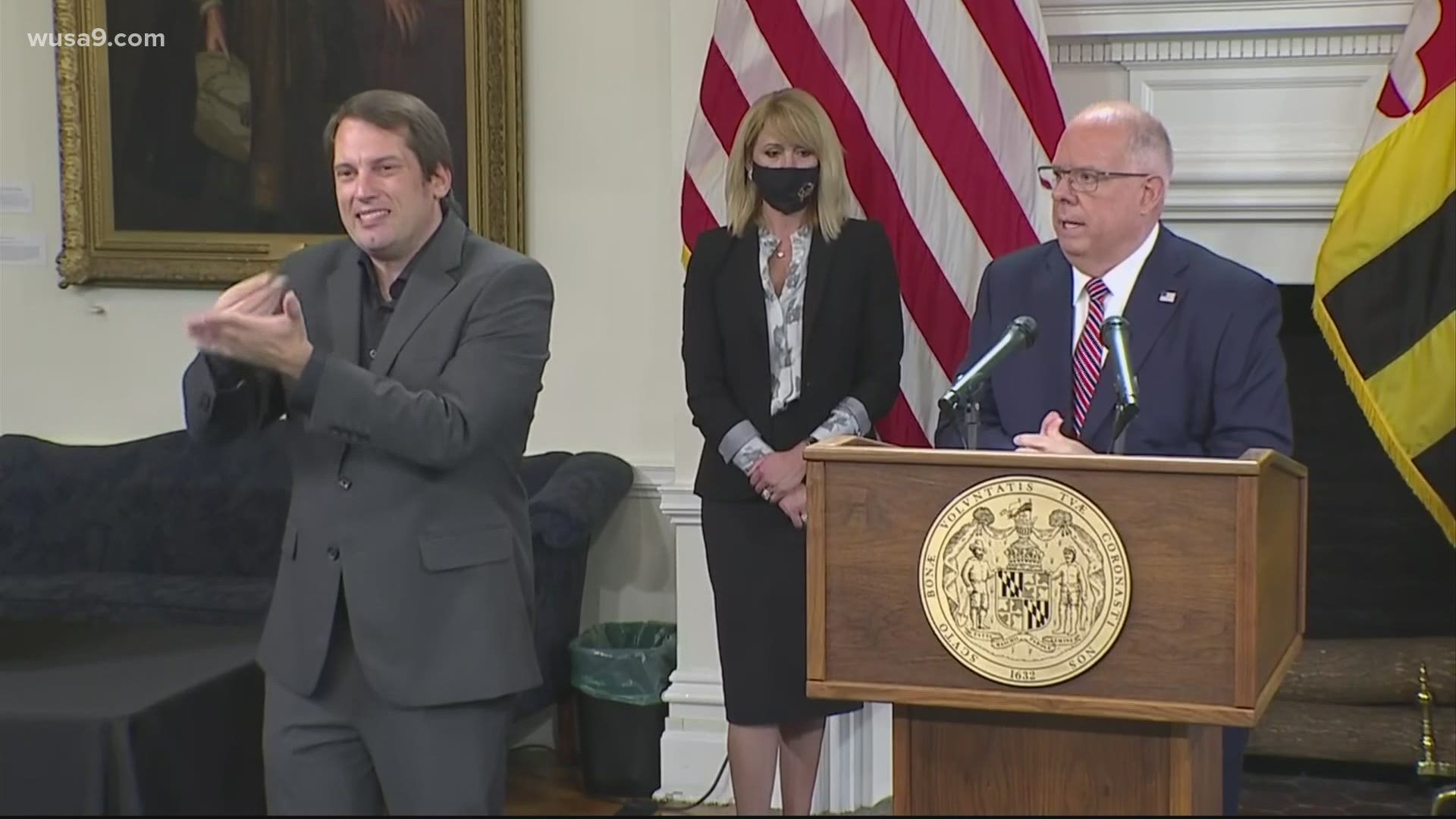 ANNAPOLIS, Md. — Governor Larry Hogan called for all 24 jurisdictions in Maryland to move to the third and final phase of the state’s coronavirus recovery plan, as several counties have not made the transition yet.

Montgomery and Prince George’s counties, as well as Anne Arundel County, remain in the second phase of the recovery plan, according to Gov. Hogan's office.

During the governor's Thursday coronavirus news briefing, Hogan said while the conditions on the ground made reopening at a slower rate earlier a “prudent” decision, the state's health metrics show that more reopening can be done safely.

“Solving and slowing the spread of this virus and saving lives continues to be our most important priority,” Hogan said. “With our health metrics continuing to remain low and stable, local jurisdictions should be focused on our economic health and well-being as well."

Maryland is only one of eight states in the country where new cases of the virus remain low and are continuing to stay low, Hogan said during the news conference. The statewide positivity rate remains the lowest in the country -- currently at 3.1 %.

Hogan also indicated he is disappointed that a number of counties have not allocated funding from the state to help both residents and small businesses -- stating only 35% of the CARES Act funding the state allocated for 19 smaller counties in the state has been spent.

To view the news conference in full, click below:

Hogan announced on Sept. 1 that he was authorizing the state to move to the third and final stage of its "Maryland Strong: Roadmap to Recovery" reopening plan starting Sept. 4.

The following day, Montgomery County Executive Marc Elrich said the area would not be following Hogan's plan, but instead modifying Phase 2 of the county's plan.

"We're making progress, but we're not where we need to be," Elrich said in the county's Sept. 2 coronavirus briefing, announcing he was "disappointed" in Maryland for continuing to move into reopening. "It's not party time."

Montgomery County executives announced fewer restrictions for live entertainment and performances in the county, on Sept. 5. In the statement from the county, venues such as indoor and outdoor restaurants may now include live performances as part of their dining experience.

RELATED: Montgomery Co. to stay in Phase 2, but will lessen restrictions on live events and performances

These guidelines for live music were effective immediately, but individuals present must still wear masks unless they are eating or drinking (and they must be seated while eating and drinking).

In neighboring Prince George's County, County Executive Angela Alsobrooks also said the county was not in a position to move into Phase 3 yet, during a news conference on Sept. 3.

Alsobrooks stated there were four cities in the county that at the time were still seeing an uptick in cases and no progress with coronavirus.

Leaders in Prince George's County said they were concerned about a resurgence of the virus ahead of the Labor Day holiday weekend. Alsobrooks said that it is important that residents should not be complacent and feel like the pandemic is over.