Maryland to ease COVID-19 capacity restrictions, some counties may not follow

Maryland Gov. Larry Hogan announced capacity limits at bars and restaurants will be lifted Friday. So far, only Washington County says it will follow new guidance. 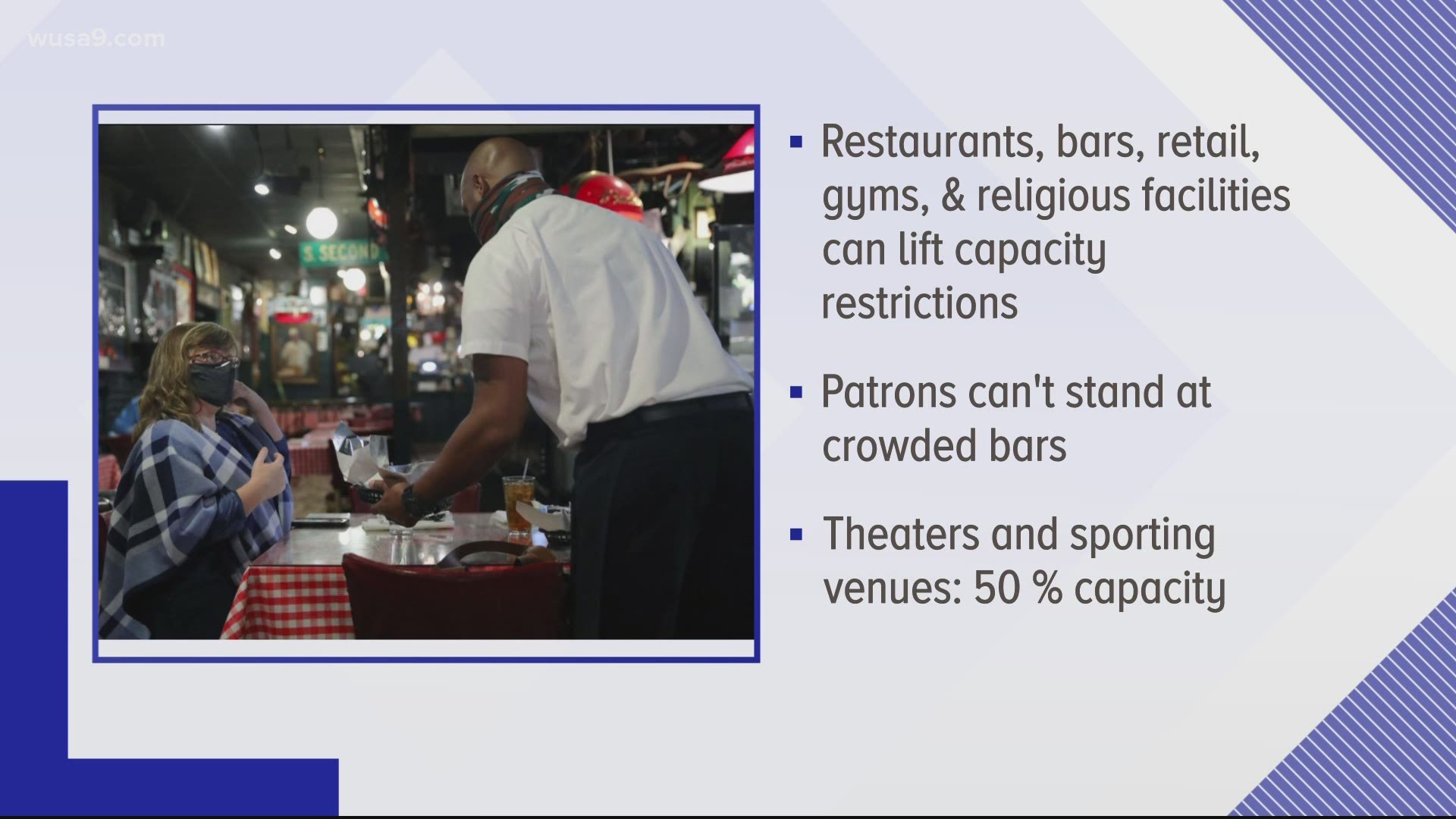 ANNAPOLIS, Md. — As Maryland continues to make progress battling the coronavirus, its governor has announced plans to further reopen the state.

On Tuesday, Gov. Larry Hogan announced capacity limits will be lifted at outdoor and indoor dining establishments and bars starting Friday, March 12 at 5 p.m. Gyms, religious facilities and retail businesses will also have their capacity limits lifted, according to Hogan’s latest order.

Meanwhile, larger outdoor and indoor spaces, like theaters, sporting venues and convention centers, can operate at 50%.

Still, Hogan says Maryland’s statewide masking order will remain in effect and patrons in food service businesses will not be allowed to stand at crowded bars if an establishment has one.

"All of our sustained positive improvements in positivity, case rate and hospitalizations have enabled us to continue to follow the science and to be able, today, to take significant steps to further ease more of the mitigation measures," he said.

With sustained vaccine progress and significant improvements in our key COVID-19 metrics, today I announced that we will be easing certain mitigation measures in our state.

Hogan’s office says Maryland’s case rate per 100,000 people is now better than 32 states. It adds the positivity rate in Maryland as declined by more than 64% in recent weeks to just 3.4%.

The state says it has also made progress vaccinating its residents too. Officials say more than half of Marylanders over the age of 65 have received a shot.

Maryland counties have taken different approaches to preventing the spread of the coronavirus.

Hogan says they can do so even after his order goes into effect Friday.

“The state law does grant local jurisdictions some powers to take actions that are more restrictive than the state’s,” he said. “But my advice would be that they should follow the state guidance and get in line. It's been very confusing with a patchwork of different people changing rules or not being in alignment with one another.”

.@RSprouseNews and I reached out to nearby MD counties to see if they'll follow @GovLarryHogan's plan to ease COVID capacity limits Friday. Here's what we gotten so far... (@wusa9) pic.twitter.com/XSCMrU3CVG

WUSA9 reached out to nine Maryland counties in the region to see if they planned to follow the governor’s guidance on Friday.

Calvert, Frederick, Howard and Montgomery counties all said Tuesday afternoon they had yet to make a decision regarding Hogan’s announcement.

“Because we learned of the executive order at the same time as the public did, we are currently reviewing it and will not have a statement at this time,” Mary Anderson, public information officer for the Montgomery County Health and Human Services Department, said.

Anne Arundel and Prince George's counties have yet to reply.

Many Maryland businesses are eager to see capacity restrictions be lifted in the state.

The Saphire Café & Tiki Bar in Bethesda is one local establishment that supports the move.

One of the bar’s former employees, Michael Collins, said he was laid off at the beginning of the pandemic due to the economic slowdown. He said he has been frustrated with local officials’ efforts to help small businesses so far.

“I lost my job, businesses are dying,” he said. “There’s restaurants and bars that have been in this town for 40-plus years that are now gone. No help from the state, no help from the county, just more rules. Meanwhile, box stores, they keep opening.”