Here's when baseball could be coming back to DC, Dr. Fauci tells Nats' Ryan Zimmerman

Mr. National sat down and interviewed the National Institute of Health Dr. Fauci during a live stream Wednesday – from cocktails to DC prep, we learned a lot. 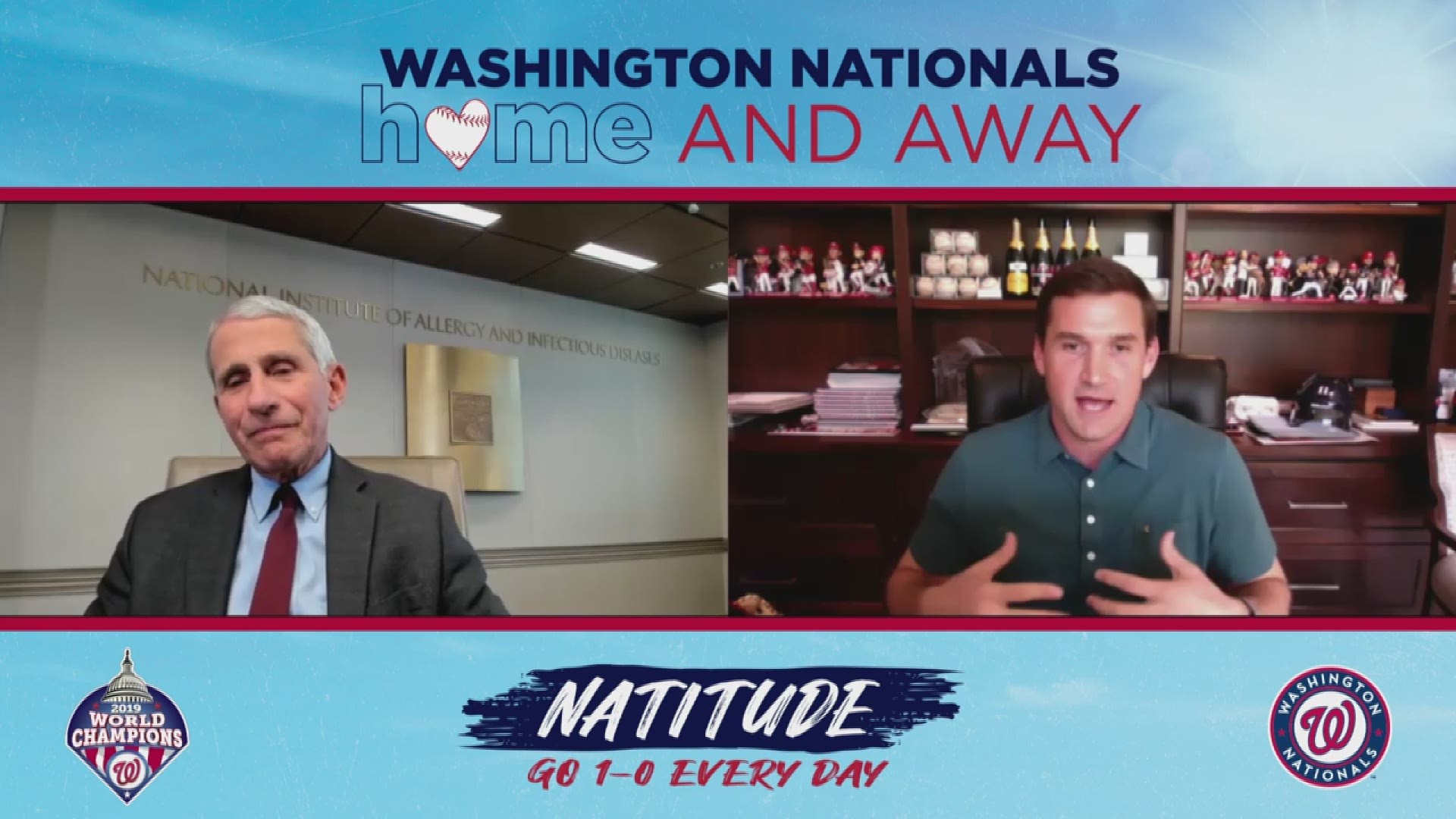 WASHINGTON — He's honored that Brad Pitt portrayed him in SNL but thinks his Brooklyn accent "needs some work." He thinks Washingtonians are some of the "most resilient" people, would start Scherzer in a playoff game and thinks Joe DiMaggio is the greatest player of all time.

So what else do you get when you sit a World Series Champion and the Director of the National Institute of Allergy and Infectious Diseases down together? Turns out, one hell of an interview.

Nationals first basemen Ryan Zimmerman interviewed Dr. Anthony Fauci virtually on Wednesday, discussing everything from how the D.C. area is doing in combating the virus to when he thinks baseball is coming back. The two chatted together from the comfort of where they've been spending most of their days: Fauci with a gleaming golden "National Institute of Allergies and Infectious Diseases" in the back, and Zimmerman with some well-placed Nats bobbleheads and champagne bottles behind him.

While Fauci has become quite the public icon and social media star – it's not everday you have an SNL cold open about you – the admiration between the two seemed mutual: Fauci said he's been a fan of Zimmerman since he left the University of Virginia.

And after thanking the doctor for his trusted guidance and clear information, Zimmerman proceeded to ask for his opinion: Did he think the DMV was doing enough to help mitigate the spread? When do we think we could see life return back to normal?

"It's better. We started off slow – and there were a lot of mishaps that we have to be realistic and humble to admit," Fauci responded after Zimmerman asked about antibody testing and reopenings. "But right now, we've done something that the United States has done better than anybody else: we've engaged the private sector."

When areas do loosen up on social distancing efforts, it's normal to expect an increase in daily cases, said Fauci. But it's the ability and efficiency of contact tracing and continuing efforts – a component of all three of the DMV's reopening plans – as well proper medical care that will get areas back to a new normal sooner, rather than later.

For Washingtonians, strict prevention efforts and coordination between city leaders have let the D.C. area do a "really good job" keeping the virus from spreading, Fauci said. While surges have still happened, the DMV hasn't been hit as hard as others in the Eastern corridor, like New York City.

"My message to my fellow Washingtonians would be this: We are doing a really good job of preventing this from exploding by doing the mitigation of physical separation. We need to keep it up for a while longer, and when we return to 'normal,' Ryan, we can't just turn a light switch on and go right back. It's going to be a gradual process," Fauci said.

Since the private sector has come in to make tests and get materials ready, each week that goes by "gets better and better," Fauci said. More testing allows more data, so researchers like Fauci can pick up on trends with the virus, such as cues with susceptibility and impacts on pregnancy.

Zimmerman, who has an 8-month-pregnant wife, was curious for that answer. According to Fauci, based on data from cases in China and Europe, other diseases like influenza seem to be more harmful to pregnant women.

But, "I never guarantee anything unless it's done," Fauci said. "I believe cautiously and optimistically, that by the time we have to prepare for the fall and the winter, we will be prepared."

"It's kinda like how I am talking to you, baseball legend," Fauci said in response to Zim's question about U.S. testing. "How the Nats were in the beginning of the season – people were saying, ya know, you're messing up! But you're getting better and better and better and guess what? We won the World Series. So there ya go."

Cool, so when can we expect baseball to return? Hopefully summer, says Fauci

So, when can Nationals fans hit the ballpark and when can players like Zimmerman expect baseball to come back? The answer, according to Fauci, is a bit more complicated and relies heavily on how well D.C. continues to adhere to guidelines.

"There's a pathway there [to normalcy], but it's going to depend," he told an eager Zimmerman. "First you get past that checkpoint or gateway, kind of like the minor leagues before you get into the big leagues. If we do that successfully – I could foresee a number of scenarios."

While baseball won't be immediately back to normal regardless of when it opens, Fauci discussed a couple of ways he sees the sport coming back, including one that might not be a favorite between players: at least let the games come back on air, regardless of an empty stadium.

"Get all of the players tested so they are negative and can't infect one another," Fauci proposed. "Let them go to a place, a few places, where they can at least play ball and [we can] watch it on TV."

His second option was similar: proposing to restrict the number of people in a stadium; encouraging 6 feet of distance during ticket purchasing; and limiting crowds to every fifth or fourth seat apart once the games star.

Best of all – he just wants a regular-season back, and hopefully soon. He said he feels for players like Zimmerman who "don't have as many seasons left" and for the rookies who were about to kick off their careers, all of which have been put on hold.

"I hope there is some form of baseball this summer," Fauci told Zimmerman. "Even if it's just TV – & I am saying that not just as a baseball fan. I mean, it's for the country's mental health to have the Great American Pastime be seen."

Scherzer to start, and no – he hasn't had a Fauci Pouchy from U Street

Originally from New York, Fauci has lived in the D.C. area for more than 50 years. Zimmerman made sure to ask the renowned doctor about where his true allegiances lied – was it the Yankees, or was it really the Nationals?

"I love the Nats. I love everybody on the Nats," he assured, talking about his Brooklyn childhood and how the split between the then-Brookyln Dodgers and the Yankees had allegiances already divided. "Right now, today, I think the character of the Washington Nationals is that this year is just historic. You can't savor it any more than a team came back. And in the end, even when we were behind, I knew we were going to win!"

Did he come to any of the postseason games? Unfortunately, no. He was busy you know, saving the world from infectious diseases. But he watched them avidly. Teddy Roosevelt is his favorite racing president, and Joe DiMaggio is the best baseball player of all time, he told Zimmerman.

When asked about who he would start if he had any pitcher on Nationals at his disposable, Scherzer the preferred favorite.

"I don't want to insult anybody, but it would have to be Max. I mean Stras is great and as good as anyone, but there's something about Max that you gotta love,' Fauci said.

But baseball is just one element of life many are waiting to come back. What about an overall return to normal? How do we recover from a global pandemic?

"I have been, for decades, talking about the fact that historically pandemics have occurred. In the past, it's shaped societies – measles wiped out the Aztec population in South and Central America. The plague wiped out a third of Europe. Polio devastated us before the vaccine," Fauci said. "We kept saying that 'we need to be prepared because outbreaks occur.' The only problem is that they space themselves in a way that there isn't a corporate memory. We have to keep putting billions of dollars in preparation. I hope the lesson learned is this: Never again. We should never be unprepared for something as catastrophic as we are now."

Analyzing and tracking infectious plagues. Directing the response to a global pandemic. Having Brad Pitt portray him on SNL, and now squeezing a World Series Champion interviewing him into his schedule – the man is busy. But too busy to try a signature cocktail named after him, Zimmerman asks?

"There is a bar on U Street that has created a Fauci Pouchy, a sort of adult Capri Sun," Zimmerman continued with a smile, referencing El Capo Deli's newest cocktail. "I am going to take it that you've probably haven't had one but there is a lemonade, a sweet tea, and a strawberry. What one would you have?"

Kyley Schultz is a digital editor at WUSA9, covering everything from DMV politics to house fires and the Nationals. You can follow her on Twitter @KyleyBSchultz