Gov. Larry Hogan released the state's reopening roadmap Friday. He says the curve is still heading upward, so it's not time to reopen just yet. 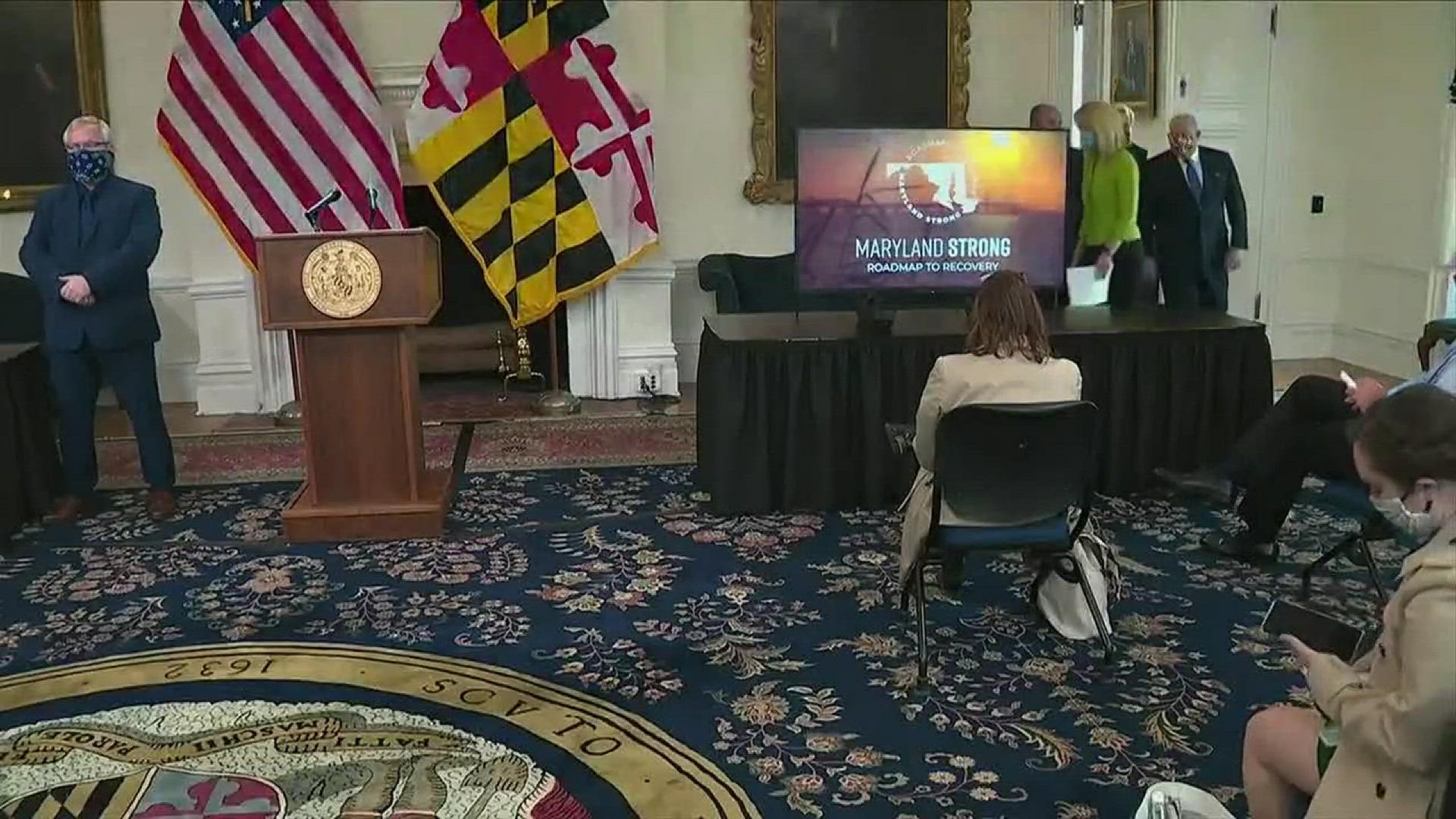 LAUREL, Md. — With coronavirus numbers still coming in every day, when can we get back to normal?

At a news conference Wednesday outside the newly reactivated and COVID 19-focused Laurel Medical Center, Gov. Larry Hogan announced plans to release a "Maryland Strong, Roadmap To Recovery," on Friday, which he says "will lead us safely out of this pandemic into a brighter and more hopeful future."

The governor said with coronavirus cases, hospitalizations, deaths and ICU admissions continuing on an upward trajectory, it's too early to lift his stay-at-home order for non-essential workers.

Here's a breakdown of the three-stage recovery plan:

Stage 1: Maryland will lift the stay at home order and allow the reopening of many small businesses. Other community activities that are low risk -- like recreational fishing and elective surgeries -- will resume. Local governments like individual counties can have the flexibility to open up other things, such as parks and playgrounds and libraries with safety protocols in place.

Stage 2: Will occur if there is no spike in deaths or sustained spike for ICU cases, as well as no additional significant community transmissions. This would include even more businesses reopening, and non-essential workers who can't rely on teleworking returning back to their jobs.

There would still be limits on social gatherings, but transit schedules like the Metro would return to normal. Indoor religious gatherings would be allowed with limited capacity, and restaurants and bars would be able to reopen with some safety protocols.

Stage 3: More "high-risk" activities like large social gatherings and high-capacity bars/restaurants would be allowed to open, loosening up restrictions on visits to other places like nursing homes and entertainment venues. Large scale religious gatherings would be allowed as well.

While the state has to see a continued trend in downward cases before it can begin the recovery plan, Gov. Hogan said he was hopeful of a soon start date thanks to aggressive actions from Marylanders.

"Fortunately, because of the early and aggressive actions and because of the extraordinary sacrifices of Marylanders, we are now in a position to move from containment and mitigation to planning the gradual rollout of our recovery phase," Governor Hogan said Friday. “There are some very real reasons for hope and optimism right now and there is clearly light at the end of this tunnel, but exactly how and when we will get to that light is going to be up to each and every one of us."

The number of new cases in Maryland each day bounces up and down, while the total keeps climbing. But the governor says that's not the key measure. He's looking for 14 straight days of fewer deaths, fewer hospitalizations and fewer people transferred to intensive care.

Deaths have still been difficult to predict, with 30 on Monday, 68 on Tuesday and 47 on Wednesday.

RELATED: If we keep it up, here's when we could start reopening things

The number of people admitted to hospitals and transferred to the ICU has also been uneven, but the trend line is up.

The state does continue to expand hospital capacity. The governor was touting the 135 new COVID-19 beds at the University of Maryland Laurel Regional Hospital. Hogan said the state has already surpassed its planned surge capacity, with 6,700 available beds, instead of the 6,000 that had been planned.

With the region locked down and the economy cratering, some states plan to reopen soon, but everyone is looking for a way to do that safely.

In addition to more hospital beds, Maryland wants more protective equipment, more testing capacity, and more people to trace the contacts of people who are positive for coronavirus.

State health officials said they currently have 250 people to conduct contact tracing and are looking to quadruple that. Those disease detectives may be crucial to getting us back to some semblance of normal.

The National Governor's Association, which Gov. Hogan heads, released its own roadmap to reopening Wednesday. It says the White House needs to dramatically boost testing and strengthen other public health measures first.

The report comes even as Georgia and Tennessee move to lift restrictions in days.