Redfield, who appeared at a news conference with the governor, will advise state officials on planning a response to virus variants, the state’s vaccine campaign. 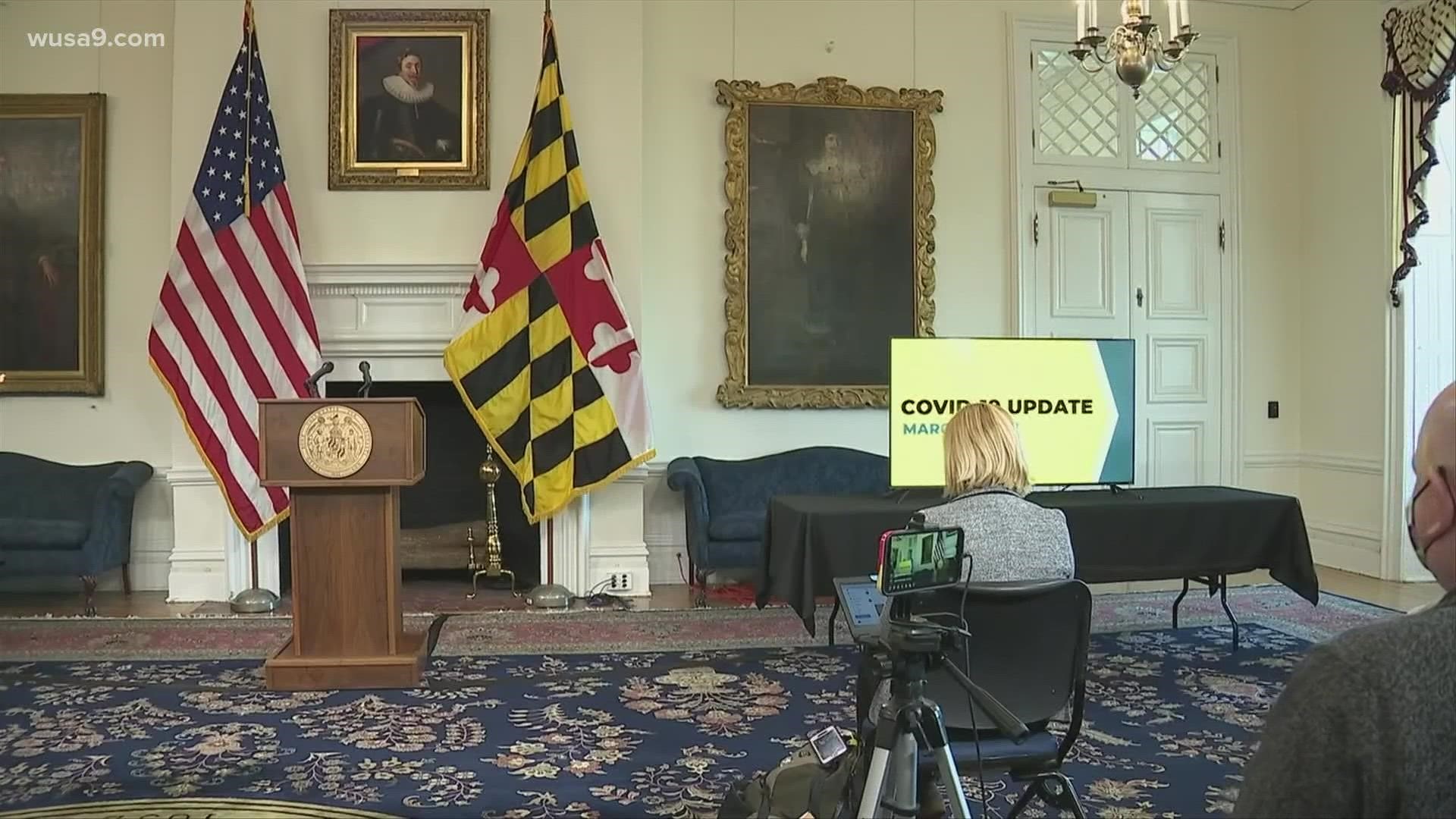 ANNAPOLIS, Md. — Gov. Larry Hogan announced Tuesday that Dr. Robert Redfield, the former director of the Centers for Disease Control and Prevention, will be a senior adviser to support Maryland’s response to COVID-19.

“This will give us at least one mass vaccination site in every region of the state,” Hogan said, adding they will be able to administer thousands of shots a day when vaccine supplies increase.

A mass vaccination site in southern Maryland at Regency Furniture Stadium will open on Thursday. Another will open on the Eastern Shore at Wicomico Youth & Civic Center in Salisbury by March 18. A site in western Maryland will open by the end of the month at the Hagerstown Premium Outlets, and Meritus Hospital will serve as the clinical partner.

However, officials say they have just been told that there will be NO J&J shipping to the states next week. @wusa9 https://t.co/WolHfxZyEb

Hogan said vaccine providers will begin receiving the state’s 49,600 doses of the newly approved Johnson & Johnson vaccine as early as Tuesday. However, he said governors were told in a call with White House officials Tuesday morning that the entire inventory on hand has been shipped to states. That means it will be a couple of weeks before more is produced and allocated.

“They’re promising that by the 18th we will be getting another shipment,” Hogan said.

The Republican governor said M&T Bank Stadium’s mass vaccination site will ramp up ahead of schedule this week to 2,000 shots per day. This week, the mass vaccination site at Six Flags in Prince George’s County will double the number of shots it can administer from 2,000 to 4,000 a day, Hogan said.

The governor has been criticized by Baltimore officials for lacking equity in vaccine distribution to residents in the state’s largest city. Hogan said a news conference is scheduled for Thursday for more details about a statewide plan to improve equity in vaccinations.

“We’re going to continue to work on that problem,” Hogan said.

The governor said state officials have tracked data relating to how the virus is affecting minorities from early in the pandemic.

“We’ve known this has been an issue,” Hogan said. “Now we’re getting the vaccines, and we’re seeing how it’s working and how it’s not working and how we can improve, and it’s improving every week.”

Hogan said Redfield, who appeared at a news conference with the governor, will advise state officials on planning a response to virus variants, the state’s vaccine campaign and plans for safely reopening Maryland.

“From the very beginning of this crisis, I have always emphasized how important it is to follow the science and to get the best advice from the medical experts, and we’re very fortunate to have such a renowned expert as Dr. Redfield,” Hogan said.

Redfield was appointed to lead the CDC by former President Donald Trump in 2018. While he made appearances during the pandemic, Redfield was often a third-tier speaker after remarks dominated by Trump, Vice President Mike Pence and others. Redfield also was in open contradiction with Trump at times last year, such as when the former president disagreed with him about the effectiveness of protective masks. Redfield spoke emphatically of the importance of wearing masks to stop the pandemic.

On Tuesday, Redfield said he was proud of the CDC under his tenure, even if he was disappointed by the “inconsistency of messaging.”

“I’m proud of what we did. We did put science first,” Redfield said.

RELATED: Hogan: 40% of Marylanders 65 and older are now vaccinated