Housing inspectors say DCRA has failed to provide workers with adequate protection during the coronavirus pandemic. 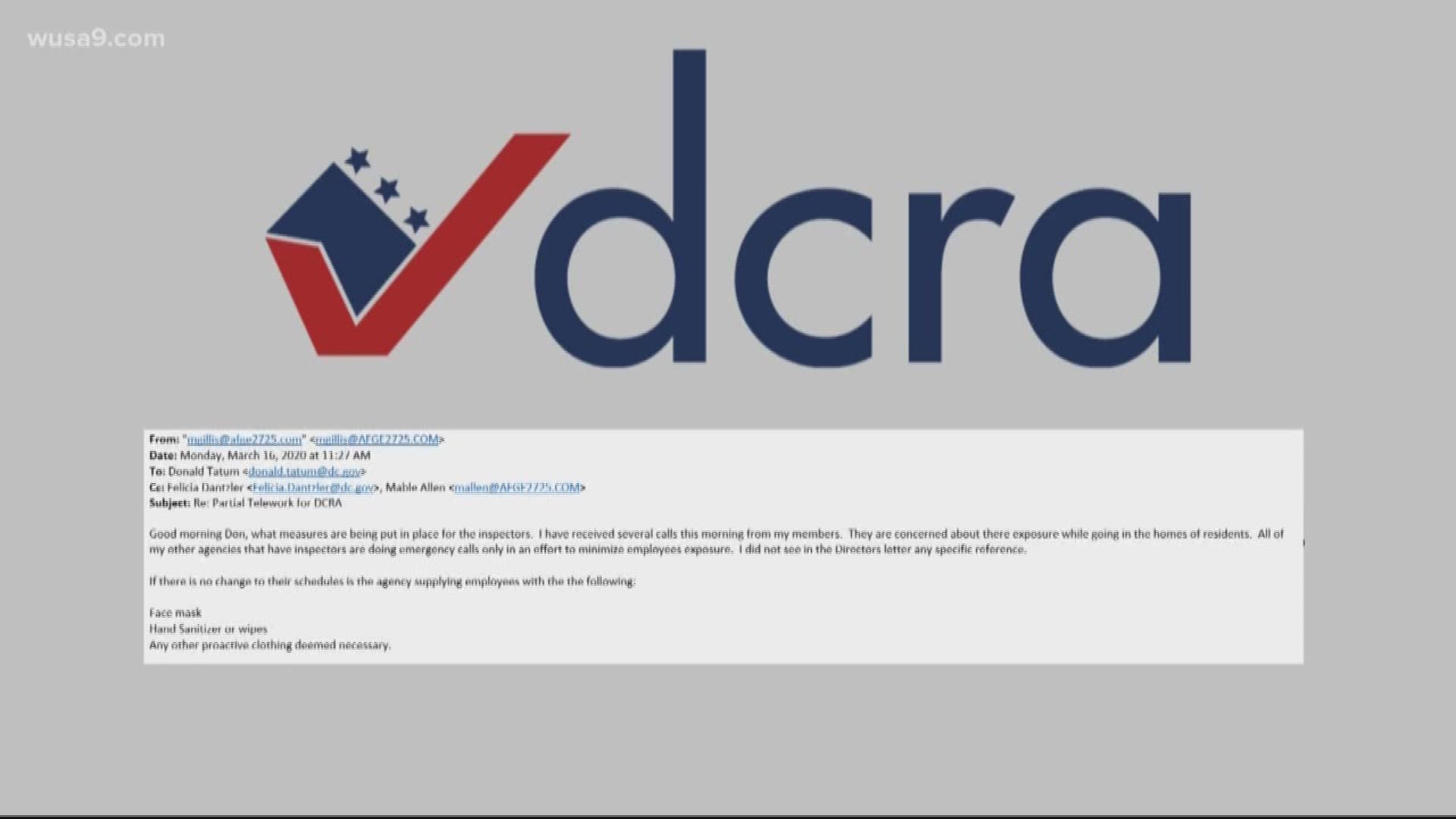 WASHINGTON — Miranda Gillis, union president for the D.C. Department of Consumer and Regulatory Affairs (DCRA), says she's been busy fielding calls from concerned employees who believe DCRA is putting them at risk.

She said employees told her the agency was putting them at risk after a fellow worker tested positive for COVID-19 and, they say, management didn't notify them until more than a week later.

DCRA employees also said inspectors who worked with the infected person were still going into people's homes without masks or gloves.

WUSA9 obtained a letter from the Department of Human Resources confirming the positive case. The letter advises the DCRA employee that he was likely exposed to a positive individual "at your work location between March 16 and March 19."

The notice was sent just yesterday – two weeks after the potential exposure.

Gillis said employees were sounding the alarm well before the letter.

"I started receiving complaints from the members that they had no kind of protection," Gillis said. "They had no gloves. They had no sanitizer. They had no face mask. The agency had not given them anything."

Gillis says she sent an email to DCRA's labor liaison on March 16 stating the inspectors were "concerned about their exposure while going into the homes of residents." She demanded they get face masks, hand sanitizer, wipes and other protection.

"The next day, I get a text from my chief shop steward from the agency, and she was like, 'Miranda, you're not gonna believe what they gave us to work with,'" Gillis said.

Gillis said the employees snapped pictures that showed a plastic bag of wipes and a couple of pairs of gloves.

Workers said that simply was not enough for them to do their jobs safely for the whole day.

We asked DCRA about the supplies. After our broadcast deadline, WUSA9 received the following statement from DCRA Director Ernest Chrappah:

“Since the beginning of the coronavirus outbreak, DCRA, under the leadership of Mayor Bowser, has put the safety of our employees and the residents we serve first. We’ve done this while balancing the need to continue providing critical city services.

On March 24, I notified the entire agency that two of our colleagues had tested positive for COVID-19. The agency also immediately notified individuals who came in contact with these employees and provided guidance based on DC Health and CDC guidelines. The employees stayed home as soon as they became ill and subsequently tested positive. Out of an abundance of caution, our building was deep cleaned and disinfected shortly after their results were confirmed. DCRA also ordered safety and disinfectant products for our employees, which are being distributed as soon as they arrive.

On April 1, in accordance with guidelines from DC Health and the CDC, a formal letter was sent to all of our employees to further remind them of the steps we should all be taking to keep ourselves safe.

DCRA’s office closed to the public on March 25, although we remain operational through virtual means, and we encourage residents and businesses to use our online services. (dcra.dc.gov). With respect to inspections, DCRA is piloting virtual inspections that can be conducted without inspectors having to physically enter a property. Housing inspectors who are ill or have been asked to self-quarantine are not conducting inspections.”

Credit: WUSA9
DCRA inspectors say agency is not providing protections for them during pandemic

Gillis said she never received a response from DCRA.

According to a DCRA newsletter, the agency moved its operations online and stopped doing in-home inspections on March 25. That was two weeks after the Mayor's recommendation that employees telework. And, according to the letter from the Department of Human Resources, that's at least three weeks after an employee tested positive.

WUSA9 also learned from D.C. Council Chairman Phil Mendelson that a second employee at DCRA tested positive for coronavirus. That person, an administrative staffer, has fully recovered, according to Mendelson.

WUSA9 was told the first inspector mentioned in this story is also on the mend.