Montgomery County Executive: Our COVID numbers are lower because of the community following guidelines

“Despite the enormous challenges of this past year, we have managed to achieve some important milestones and successes” 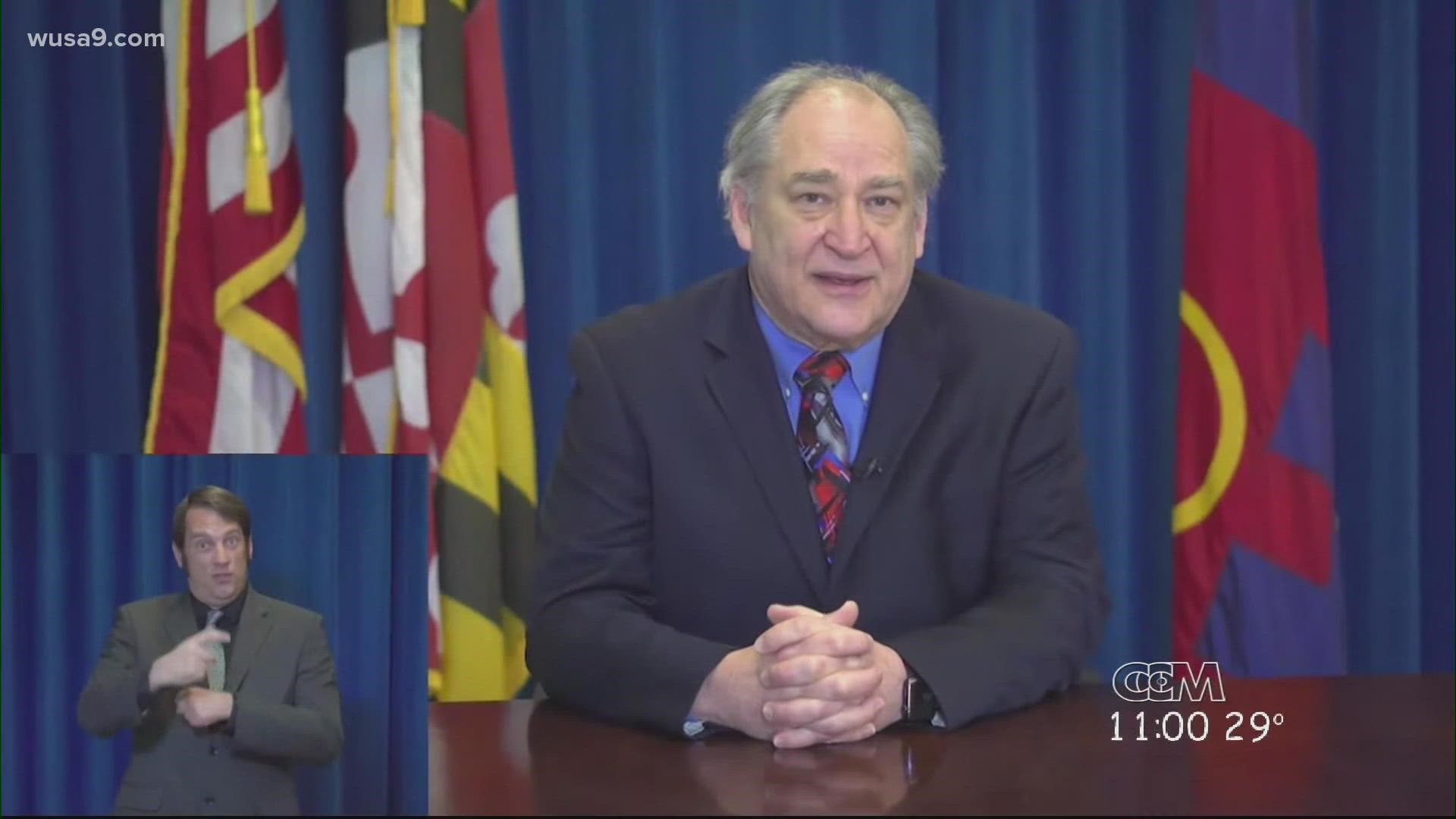 Elrich began the address by acknowledging the one-year anniversary and how the virus has taken its greatest toll on the county's elderly and communities of color. So far, nearly 1,400 county residents have died from the virus, while 60,000 have contracted it.

Although he acknowledged case counts are relatively low compared to other places around the region and country, he added that the lower numbers do not make a case for loosening restrictions.

“Some people say that we should open things back up because our numbers have come a long way down from the peak of the last wave," he said. "I try to remind them that our numbers are low because we implemented the necessary restrictions and that they’re low because of our residents who have been willing to follow the guidelines even as their lives have been severely disrupted.”

RELATED: TIMELINE: 18,000 dead. 1 million sick. It's been a roller coaster of a year since the first case of COVID in the DMV

Elrich shared that over the last year, the county has provided more than $70 million in relief to residents, including more than $50 million in rental relief. He also reflected on the county's creation of curbside pickup zones, "streeteries" and modified alcohol sales.

RELATED: Could outdoor 'streeteries' become a permanent fixture across the DMV?

Elrich also highlighted the arrival of COVID-19 vaccines in the address, acknowledging the difficulties that the county has experienced, as well as the anxiety, confusion and frustration the system has caused residents. Yet, he provided a message of hope to locals, saying there are more doses on the horizon.

As far as the other issues the county faces, Elrich discussed how the county must have a transportation focus in a post-COVID world, highlighting transit with an emphasis on equity as one key to future success. He reflected on the previous launch of the Flash Bus Rapid Transit system on Route 29 and shared that the county intends to move forward with plans of implementing the BRT along Veirs Mill Road and Route 355.

He also described the county's goal of continuing to move forward with the use of electric vehicles in their work to fight climate change, including increased access to charging stations.

RELATED: Electric buses in Maryland could make Virginia and DC go green, too

Elrich also shared plans to advance the county's Vision Zero plan along with increasing pedestrian safety, reducing obstacles for people with disabilities and slowing traffic in places with a large pedestrian presence.

He also celebrated county library systems' ability to implement virtual programs in the pandemic and their successful elimination of late fees, which served as a barrier to library use for families who face economic challenges.

Elrich also gave kudos to residents, as the county finished Census outreach with a self-response rate of 78% in the past year, which was 2% above the rate in 2010.

Another highlight of the address was the county's focus on climate change. Elrich reflected on the release of the living-document draft of the Montgomery County Climate Action Plan and its acknowledgments of climate-related risks to residents, businesses and natural environments.

He also shared that the county's Department of General Services is updating the county’s real estate portfolio to include a reduced need for office space due to teleworking, among other updates. The county's hope is that the Initiatives will save money and conserve county resources. The county is also pursuing innovative environmental design concepts, such as the use of solar glass and micro-grids, as well as installing solar panels on a closed landfill in order to provide less-costly clean energy for lower-income households.

The county is also continuing to work to reimagine public safety.

“For years, every social problem has been dropped on the police to handle," Elrich said. "A more appropriate response should be provided by our human service agencies and that is the path we will build going forward.”

He shared that the county has had immense community input on the initiative to deliver services in a more equitable manner.

“We are considered a progressive community, but even here, racial disparities in education, health, employment, homeownership and equal opportunity remain all too present. This is a deep social issue and reflects society’s inability to deal with the legacy of slavery in this county and its continuing impacts on our society," Elrich stated.