The lack of vaccinations came as Prince George's County remained the only county in the state with over 70,000 COVID-19 cases reported since the pandemic began. 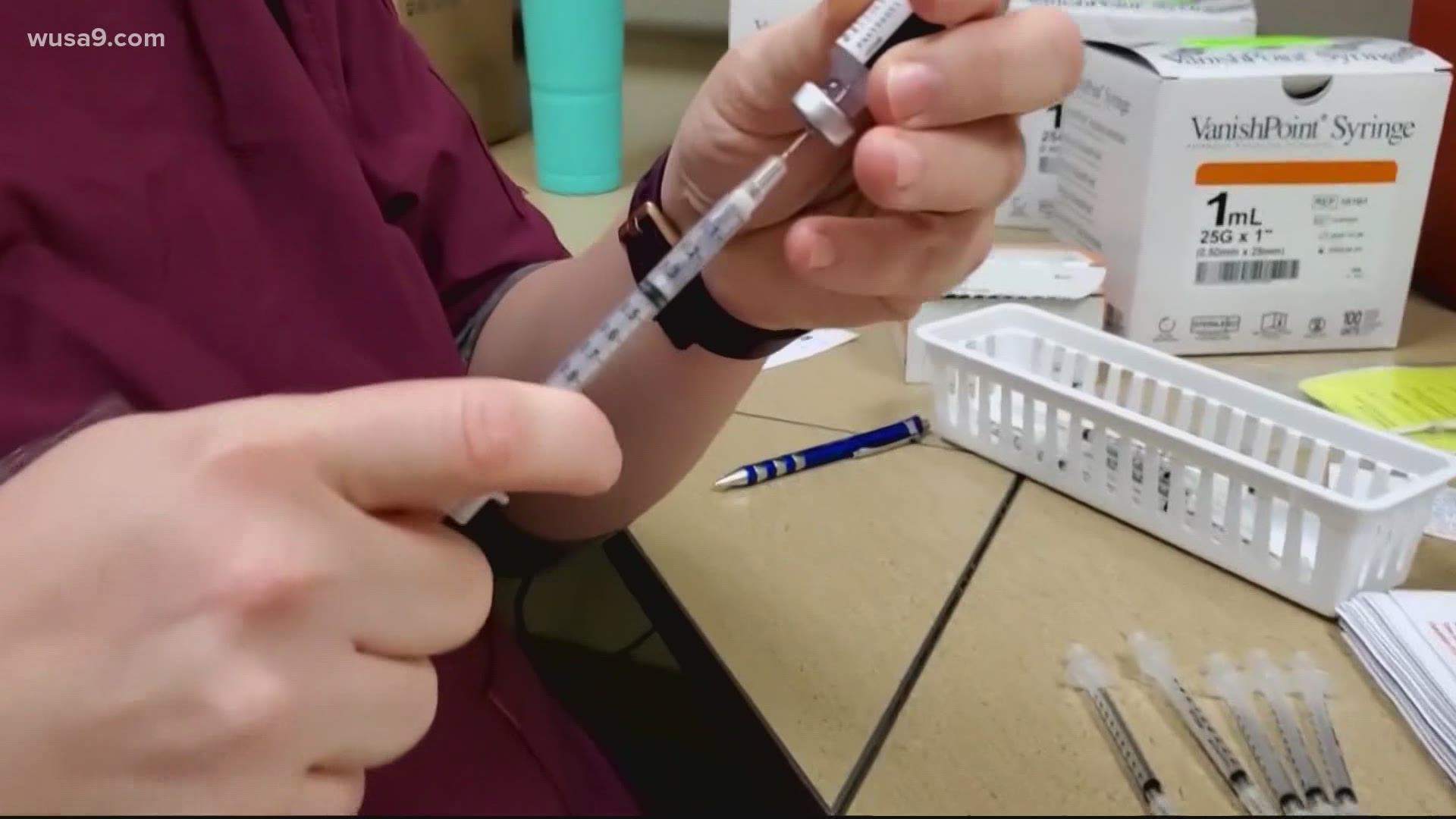 PRINCE GEORGE'S COUNTY, Md. — With Prince George's County lagging far behind other counties in coronavirus vaccinations despite being the hardest hit area for infections in Maryland, two congressmen issued a call this week for the Federal Emergency Management Agency (FEMA) to open a federally run vaccination site in the county.

Representative Anthony Brown (D-Maryland) and Representative Steny Hoyer (D-Maryland) said they issued the call after President Joe Biden announced that federal resources would be deployed to help organize at least 100 vaccination sites across the country to be run by FEMA.

This week, the two congressmen said Prince George's County should be selected to host a site due to "chronic staffing, bandwidth, and resource shortages" being seen in the area.

"The cross-jurisdictional nature of the DMV region and the high number of federal employees in Prince George’s County call for coordinated, federal support and a central, federally run site in the county," their statement read.

On Tuesday, Maryland Department of Health records showed only 4.06% of the Prince George's County population had received a first dose of the COVID-19 vaccine, which marked the lowest percentage in the state.

By comparison, 8.176% of residents in Montgomery County have received the first shot. The lack of vaccinations came as Prince George's County remained the only county in the state with over 70,000 COVID-19 cases reported since the pandemic began last spring.

Current COVID-19 vaccines require two doses given several weeks apart. Our Heath Department will ensure that everyone who receives a first dose of a COVID-19 vaccine receives a second dose within the appropriate timeframe recommended by the CDC. #ProudtobeProtected pic.twitter.com/40nYTf5s5B

“Maryland’s vaccination program has been uncoordinated and decentralized, leading to low vaccination rates particularly in Prince George’s County," Rep. Brown wrote in a statement sent to WUSA 9. "With millions now eligible for vaccinations, a course correction is needed."

Brown said the ongoing issues were impacting "equitable vaccine distribution, particularly for communities of color" and that a federally-run site could help lead to more people getting shots.

“Vaccines have not been equitably distributed or targeted to areas of greatest need, with residents having to navigate a series of confusing forms and websites, without assurance that they will even secure an appointment. These circumstances have exacerbated long-standing health disparities and left residents frustrated, confused and feeling hopeless," he said. "Action must be taken. In the face of these challenges, Prince George’s County would benefit greatly from a federally run site that will address the needs of Maryland's hardest-hit constituents.”

The push for more support came as many health workers, including medical students, were helping to administer the vaccine on the front lines with hospitals still dealing with large numbers of COVID-19 patients. Cotie Moss, a senior nursing student at Coppin State, said she volunteered over her winter break and gave out up to 500 shots a day.

RELATED: Prince George's Co. to only allow county residents, workers to sign up for COVID-19 vaccine, cancels other appointments

"There were nurses, physicians, social workers, teachers. It was extremely busy," she said. "It was really fulfilling because I love helping people and I love meeting people.”

While senior students are required to volunteer at a medical facility or site as part of their curriculum, Moss said she wanted to help fight the pandemic due to the need for assistance.

"When that opportunity presented itself, I jumped right on it," she said on Tuesday. "It was fun seeing so many different people. Everybody has a different story when they sit in your chair. It’s very fast-paced but very rewarding experience.”

After hearing about the call for a federally run vaccination site, Moss said she supported the plan since it could lead to even more people getting protected from the deadly virus.

"I think the more locations and more sites you have, the bigger the turnout will be," she said. "I feel like if there were vaccine clinics closer to your community or in your county, then it would be easier and maybe people wouldn’t be as apprehensive about receiving the vaccine.”

WUSA9 contacted FEMA for comment for this story but the agency did not issue a response.

RELATED: While vaccination numbers are low, Maryland's data on doses given to communities of color have been transparent, up to date