Although school-related sports won’t be able to happen this summer, baseball leagues are hopeful kids can get back on the field next month. 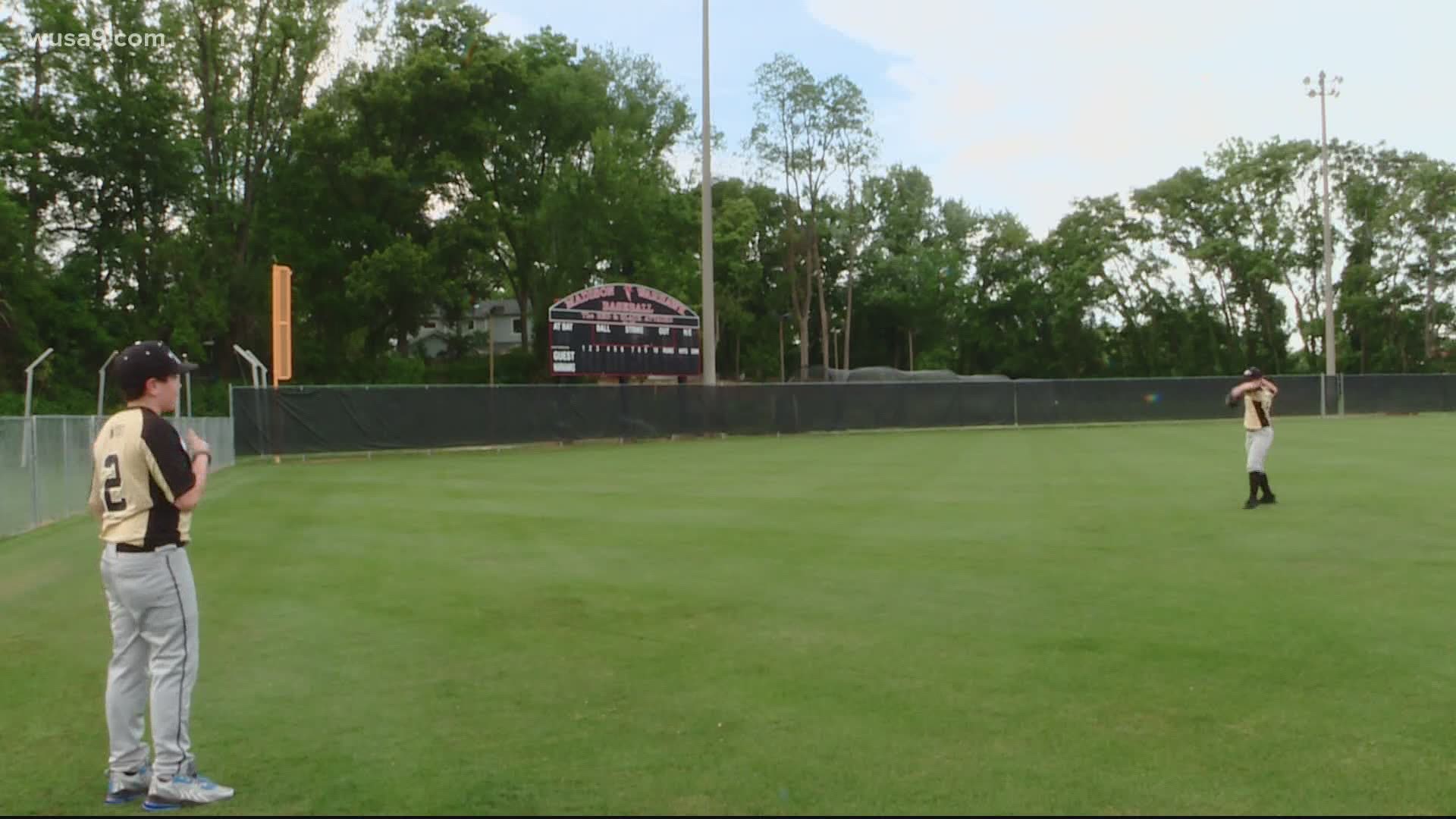 FAIRFAX COUNTY, Va. — As the DMV enters phase one of reopening, many jurisdictions are reopening athletic fields, allowing players to get back to work.

"We're just extremely excited that today is the first day that people can get back out on the baseball field," Northern Virginia Travel Baseball League Executive Director Rob Hahne said. "We're hoping in a week or two, when phase two hits in Virginia, that we’ll get out there and be able to fully practice and play games and let these kids get out and have that mental and physical release."

In Fairfax County, the Park Authority announced athletic fields can reopen for non-permitted use. They encouraged all visitors to engage in responsible social distancing behavior.

"There’s a lot more to do to be able to go out on the fields," George Mason Shortstop Pete Nielsen said. "It just makes it a lot more fun as we’re trying to kill the time right now."

Credit: WUSA
5th grader Kyle Furr throws the ball to his friend Joey Wyatt, excited to be out playing with friends again.

Players can get out on the field, but only to practice and get exercise. Permitted games have not been approved in Northern Virginia yet.

High school sports in Virginia have also been canceled for the summer, but players are gearing up for non-school related summer baseball.

Gov. Ralph Northam said he would make an announcement on Tuesday on the status of summer sports.

Credit: WUSA
Gov. Northam is expected to make an announcement on summer sports on Tuesday.

"Some families might not feel comfortable yet getting out and being involved with team sports but from all the people that we've talked to, and the people in our league, 75 to 80 percent of these families are ready to get out," Hahne said.

That includes players who had their season cut short because of COVID-19.

“Yeah, it was unfortunate because we had a lot of hard work in the fall and in the winter and then it's just taken away from us just like that,” James Madison senior Chris Polymeropoulos said. “It was really disappointing.”

"I think there's a lot of people that feel for them, because for baseball you just don't show up February 24 to practice -- you put a lot of time in the offseason," Centreville High School baseball coach Scott Rowland said. "So kids have put a lot of time and to be shortchanged through senior year, it had quite an impact."

For northern Virginia college athletes, they too felt the disappointment of having the season cut short.

“It really stunk," Cornell Junior Justin Taylor said. "But you know, you look around, there's nothing we could do about that. It’s day to day really. I can you know, grab my brother, grab one friend and just try to get some work in wherever I can."

Credit: WUSA
Hahne said when games can resume new rules will be in effect for players and parents to abide by social distancing guidelines.

Hahne said the Northern Virginia Travel Baseball League is planning to have its first game on July 2 and hopes to start working out in mid-June.

Hahne said whenever games are allowed to be played again, they’re going to look different for both players and families.

“Youth sports and adult sports are going to look different in terms of social distancing and things that we can and can't do," Hahne said. "There's about 10 to 15 protocols that that will change how we play, but it won't affect the game internally because the beauty of this sport baseball is that you're sort of social distance naturally."