'If they ran it, he would still be in this room' | This AI-powered heart scan could save lives, but its Chinese origin is creating obstacles 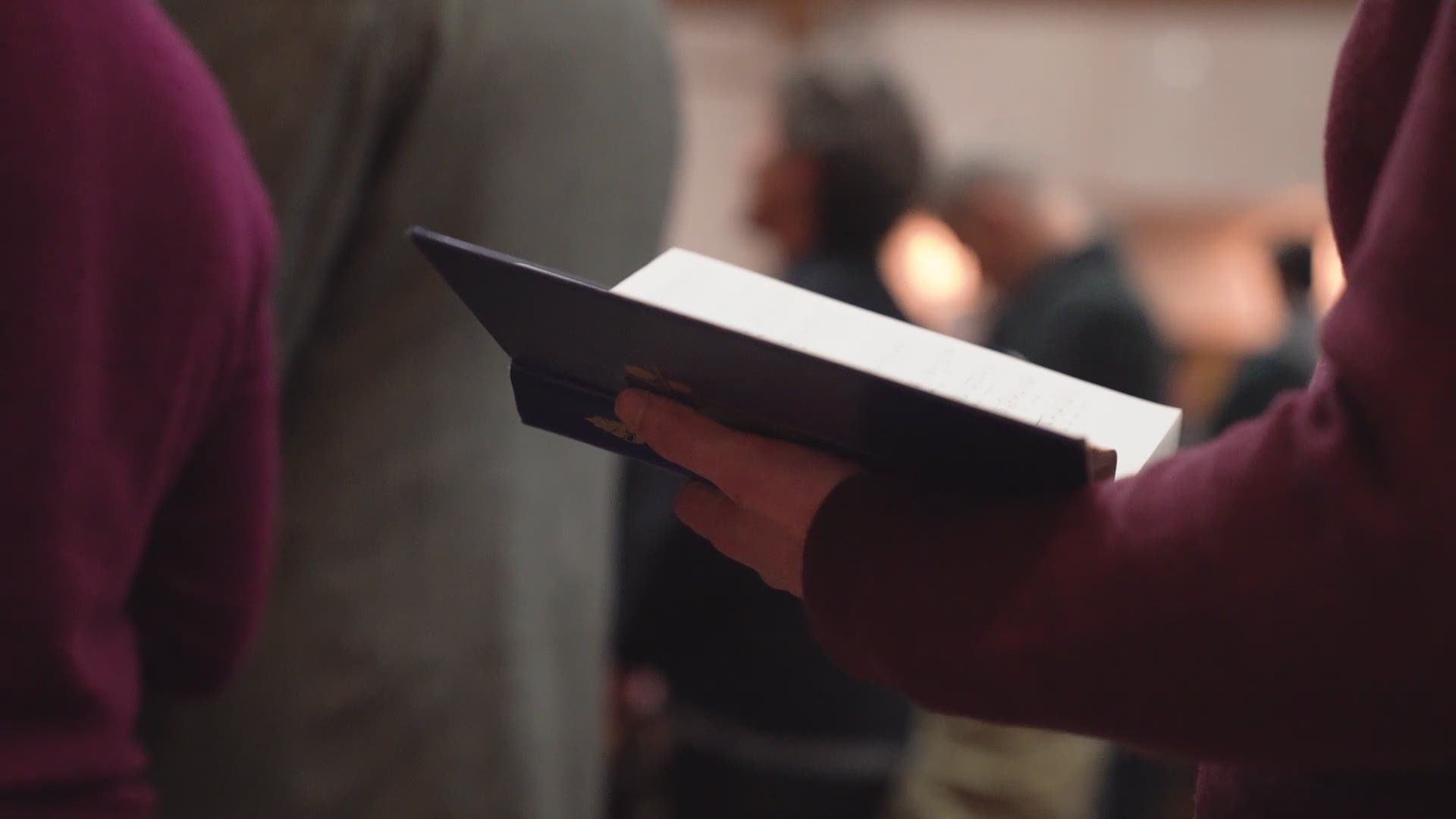 SILVER SPRING, Md. — Maryland businessman David Chung can often be found working alone in his downtown Silver Spring office, steadfast in his effort to find a U.S. business partner to spread a new form of electrocardiogram, or EKG/ECG.

The Hong Kong-born American citizen represents a Chinese corporation, Lepu Medical and Intel. Lepu is a Beijing-based conglomerate that manufactures medical devices and designs the computer programs that run them.

Chung’s experience as a medical technology expert comes from a family history of confronting heart disease.

"My sister, she has congenital heart disease, and at the age of 2, my mother was always wondering why she has purple lips," Chung recalled.

One of Lepu’s programs, AI-ECG, may have the power to revolutionize American cardiovascular care. However, its origin, and current geopolitical concerns about Chinese medical record privacy, could block AI-ECG’s introduction to the United States.

Matthew received constant ECGs and echocardiograms every few months. His family said no scans ever detected a symptom or problem.

In the meantime, Matthew became a volunteer firefighter, a lover of the outdoors and a choir member who, along with his twin brother, Michael, introduced the family to the Roman Catholic faith.

"He lived every moment to its fullest and he really was concerned about those around him," Father Joseph recalled. "Clearly, there was a lack of understanding of Matt's condition."

While Joseph Riccardi laid in bed last October recovering from open-heart surgery of his own for a non-genetic heart condition, his family got a call that Matthew had died of a heart attack while playing Frisbee during his freshman year at the University of Chicago.

"When I think about what Matt could have done with his life, the incredible kid he was, the loss to the world and to our family..." Joseph said trailing off.

"Matthew had his echo on Sept. 9," Gretchen recalled. "The doctor, during his appointment said, 'Everything looks good.'"

"They showed that Matthew had a condition known as 'hemi block,' which is a complete block of the electrical signal in a particular area of the heart," Gretchen said. "That scarring of the heart doesn't show up on echos. It does show up on ECGs, and unfortunately, that is what his doctor missed. The AI program suggested further analysis. Unfortunately, that step wasn’t taken and Matthew passed. It is a solid tragedy because my son was doing everything right."

Matthew's twin brother, Michael, does not have the hereditary genetic markers for heart disease.

"We had seen each other the weekend before, talked about our whole lives and what we were going to do after college – moving in next door, being neighbors, having barbecues," Michael remembered. "And then that moment, everything I was going to do with my life disappeared. [The AI-ECG] algorithm was ready when Matt got the test. If they ran it, he would still be in this room."

Lepu Medical’s artificial intelligence does not require a doctor’s office to be used. A simple template with 12 electrocardiogram leads and adhesive to stick to a person’s chest can be used. A 12-lead ECG system is considered the professional medical standard according to cardiologists WUSA9 interviewed – as opposed to the one sensor many popular smart watches use to detect irregular heartbeat.

Lying still for a few minutes, the sensors relay their signals wirelessly by Bluetooth to a web-connected tablet. That tablet then transmits heart readings to an artificial intelligence server jointly created by Lepu Medical and Intel.

Instead of one doctor or medical professional using their training to look at lines printed on an ECG, the artificial intelligence detects subtle abnormal lines on a digital version of the scan. The AI has been trained by analyzing 47 million Chinese patient records gathered over 17 years, according to Chung.

"It could instantly diagnose a disease, and it lists it right there," Chung said. "Now, it does not makes the decision for you as a doctor."

"We have a 'have' and 'have-not' community here in America, and this bridges the access," Bryan Parker, a patient advocate for D.C.-based International Health Care Access Group, said. "Essentially, all public places, this could be available. This could be next to an AED," Parker said.

Lepu Medical AI-ECG doesn't have a set price to administer at this time, but Chung equates it to the cost of a cup of coffee.

"One of the concerns with value in care is lack of access to care that many in rural areas have," Dr. Jen Hall of the American Heart Association said. "Telehealth (remote health care) is bringing a lot of care who didn't have that in the past. We’re just at the very beginning. The AHA is always about putting the patients first, bringing math together with patient care."

For someone tasked with advocating Chinese-developed AI technology, Chung was remarkably candid when asked about the prospects of finding a U.S. partner to distribute the technology.

"I think it’s the trust issues," Chung said. "The technology is too big for anyone to handle."

Chung noted that he himself doesn't yet trust products coming out of China, since "they’re pretty closed off."

Despite that, Chung points to Lepu and Intel’s 95% success rate claims and FDA approval of their technology. Those numbers are backed up in AI-ECG’s FDA application requirements.

Chung said Lepu Medical may soon decide to withdraw efforts to break into the U.S. market.

" [AI] is a place where the Chinese have a legitimate advantage because of their population, because of the government and researchers' access to all that information," Klon Kitchen, a senior technology research fellow with the Heritage Foundation, said. "Here, in the United States, we are very particular about our privacy."

Kitchen points out that China, whether by espionage or by legal data collection, is attempting to learn everything they can about Americans as a whole.

"We have to assume that any Chinese company, frankly by Chinese law, constitutes a data source for the Chinese government," Kitchen said.

"Patient safety products have been struggling for many years with the notion that they cost money, but they don't have a return on investment in terms of a bottom line financial return in the short term," Dr. Marty Makary, surgeon at Johns Hopkins and author of "The Price We Pay: What Broke American Health Care - And How To Fix It," said.

"They may save lives, or prevent medical mistakes, or they may even provide safety nets so that we can pick up patients that fall through the cracks, but there may not be the business case for many of these patient safety interventions," Makary said. "There may be a moral case. There may be an ethical case, but often there is not the financial case to adopt safer business tools in medicine. That's been one of the great barriers in patient safety innovation out there. Traditionally, if a patient has a complication, the hospital can profit more, because they are now charging for those complications."

Getting My Own Heart Tested

Curious as to what the AI-ECG would find, I volunteered to take Lepu Medical’s heart scan. I'm 38 years old with no heart disease symptoms and in apparently good health. However, my mother was diagnosed as an adult with a heart defect – a condition that has greatly affected her life in middle age.

The AI-ECG, run twice, detected a slight heart arrhythmia and a right axis deviation. That was the first time I had ever had my heart tested, let alone heard anything negative about it.

Admittedly, I was nervous at the news, but sought a scan from my general practice doctor. That doctor found no problems, but even cardiologists interviewed for this story point out the challenges in detecting heart problems looking at lines on a printout.

I was left with a decision: Believe the traditional but possibly less accurate method of testing, or believe a faceless artificial intelligence?

I have chosen to believe the AI. Cardiologists interviewed for this story say that in itself, right axis deviation is nothing to worry about. But it is a flag for a potential problem later in life if combined with another factor. I now have that knowledge and can be aware of it next time I have the need to test my heart.