HS senior accidentally writes book from conversations with his mother

The teen's mom saved all of their text conversations from his time in high school. He hopes his accomplishments help break the stigma revolving around young black men and inspire them to work hard and succeed. 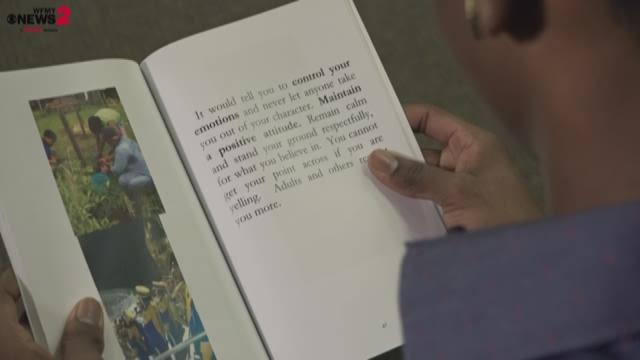 GREENSBORO, N.C. – Khairy Jenkins calls himself a ‘band head’ and always has.

What he didn’t know he’d call himself was a published writer before even graduating high school.

“I wasn’t planning to write it,” Khairy said in an interview.

Khairy is a senior at Dudley High School in Greensboro. He plays (read: loves) the horn, is a varsity baseball player and participates in many mentorship programs with local schools and universities.

With a resume like that, Khairy comes off as the perfect teenager, but he admits there have been bumps along the way.

Khairy and his mom, Alycia Shaw, are very close and he turns to her when something is troubling him. But sometimes it’s not so easy to open up face-to-face, so he texts her instead.

“Sometimes when he didn’t want to talk I would say ‘Well, just text me,” Shaw said. “And I saved all those texts from ninth grade and I said, “When he gets to the twelfth grade I’m gonna reveal these secrets that I have maintained.”

And at the beginning of his senior year, she decided to show him how far he’s come since his high school beginnings.

She also came up with the idea of turning the conversations into a motivational book and memoir.

“It was mainly my experiences and how high school and the band shaped me through my life,” Khairy commented.

He shared that he really hopes his accomplishments help break the stigma revolving around young black men today and inspire them to work hard and succeed.

“In my book, I tell people what I did that was bad or wrong at the time and how I grew from it, so hopefully they grow from my defaults,” the high school senior said.

Khairy said his friends, family and teachers have been very supportive of his endeavor.

“I’ve given the principals copies, the teachers bought copies, they love them. They read them, like, right away,” he said.

Khairy’s book is available on barnesandnoble.com and through Khairy himself. It's called If My Horn Could Speak!: A Self Help Journal Guide For Youth.

All profits from his book sales go to his college fund.

In the next months, Khairy will be hosting a release party and book signing in his school’s media center.

Khairy was recently accepted to Tennessee State University and hopes to be accepted as a member of the band.

He’s also considering the possibility of writing a second book.