The Prince William County School Board failed to pass a proposed motion for a "50% model" putting kids in classrooms two days a week and at home for three days. 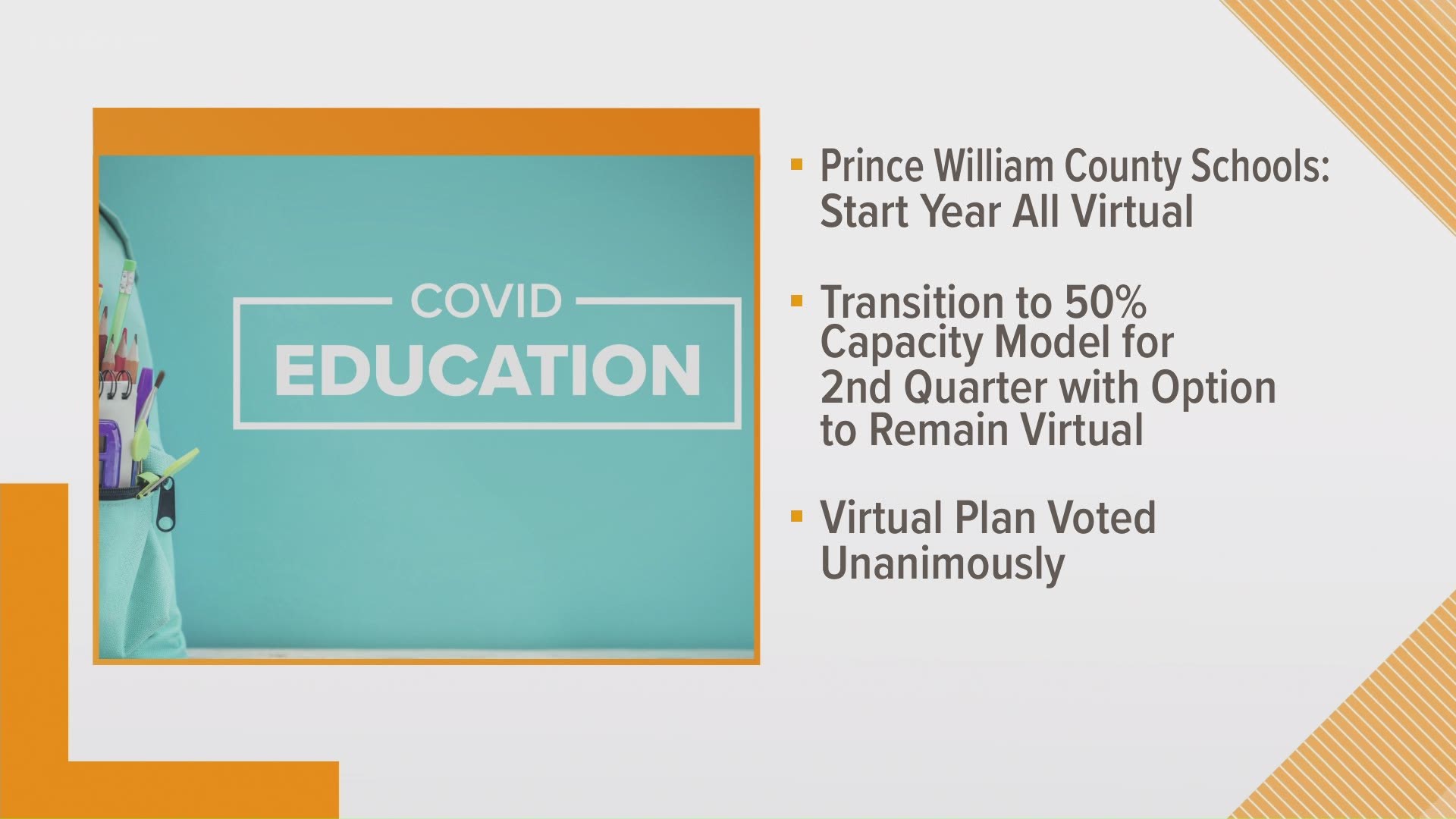 PRINCE WILLIAM COUNTY, Va. — The Prince William County School Board has approved a plan in which students would begin the 2020-2021 school year virtually.

The school year would begin on Sept. 8 with 100% virtual learning for the first quarter and transition to the 50% hybrid model previously discussed for the second quarter. In-person learning would be made available for the first quarter for special education students, ESL students and other especially vulnerable groups.

The plan passed with a unanimous vote.

The decision came well after midnight, after previous proposals failed to pass.

The board voted 4-4 Wednesday evening on a previously proposed hybrid back to school plan that would have included in-person learning twice a week and virtual learning for three days a week. According to PWC board rules, a tie means the proposed motion fails.

Issues of contention for the board centered around budgeting issues regarding providing PPE for teachers and students when they return to in-person learning, and defining exactly who would be considered "vulnerable groups," with regards to access to in-person learning.

Credit: PWCS
Prince William County's School Board voted on a final reopening plan for the fall.

In a work session on July 8, the school board reached consensus to move forward with "Plan 3" otherwise known as the "50% model," in which most students would attend school in-person two days a week and participate in virtual learning three days a week. One of the five days would be a virtual workday to allow for deep cleaning of all school settings. The final vote was slated for July 15.

"I don't think we are ready to start the 50-50 plan as of right now, and it is no fault of the hard work that the staff has done," board member Adele Jackson said. "It is because we are underfunded, understaffed and overcrowded. We only get one chance at this."

Several board members noted that Prince William County serves a majority-minority population, and reminded the board that the Black and Hispanic communities are dying at higher rates to COVID than white populations.

"I can't do for my constituents different than what I would do for my own family and get up in the morning and look at myself in the mirror and be okay," board member Loree Williams said.