A district-wide survey revealed 82% of its 13,000 respondents think SROs are important or very important to maintaining a safe learning environment. 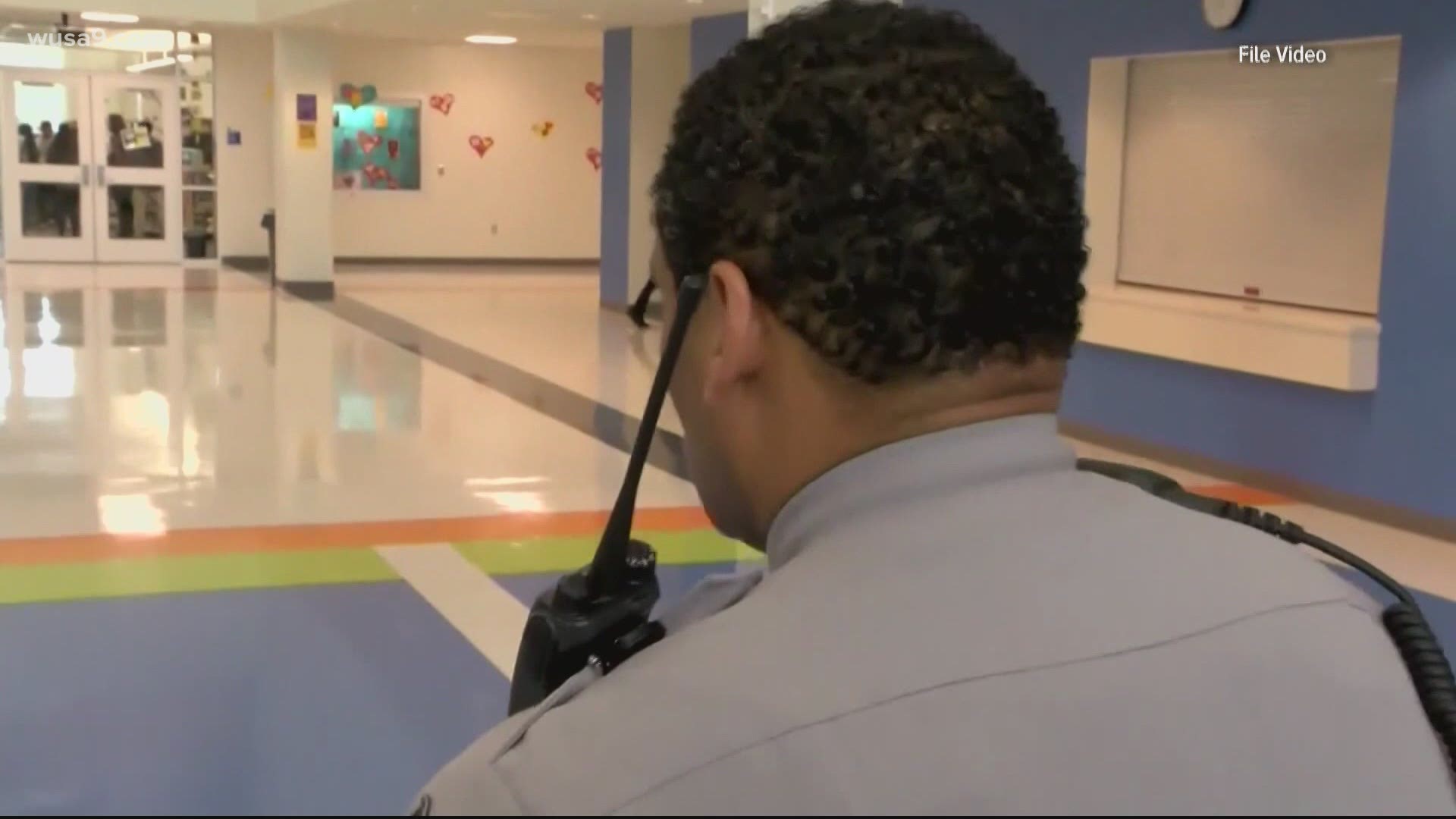 Those recommendations were drafted by the county's Police Reform Task Force, and accepted by the CEO of Prince George's County Public Schools. The school board did not have enough votes to overturn the CEO's decision.

School resource officers, or SROs, comprise one of three types of security the district employs, according to the American Classified Employees-American Federation of State, County and Municipal Employees Local 2250 (ACE-AFSCME Local 2250):

Since the killing of George Floyd, the board has had heated debates about removing SROs entirely and restricting the arrest powers of security personnel as they work to replace them with mental health professionals.

This year, PGCPS CEO Dr. Monica Goldson released the results of a districtwide survey, which show of the 13,000 respondents (45% staff, 39% parents, 13% students, and 3% community members), 82% believe SROs are "important" or "very important" to maintaining a safe teaching and learning environment.

🚨HAPPENING TONIGHT: The @pgcps school board is slated to vote on school resource officers and security reform.

In a recent survey, the majority of the 13,000 respondents believe SROs are important to maintaining a safe environment. @wusa9 pic.twitter.com/Omc9Q5zop1

Parents' opinions on how to keep their kids safe run the gamut.

"As a parent, I do not want the SROs in the school," Parent Teacher Student Association president Dannine Johnson said. "It makes our schools look like our children are in jails."

However, parent and community advocate Marylupe Romero, says she's spoken with many students who are afraid to go to school -- so much so that they've talked about leaving and going back to their home countries. She also recalls working near a high school for years and having to close early due to alleged gang violence.

"There has to be some type of security. We have to," Romero said. "Can you imagine they take away security and the next day there’s a shooting?"

The Maryland Safe to Learn Act, passed in 2018, requires school districts to have school resource officers in high schools or adequate law enforcement coverage. In a letter to the Board of Education, some county council members expressed concern at how the district would meet that requirement if they removed SROs.

According to a report from the CEO, the district currently has 33 SROs and 66 security personnel with arrest powers out of what the county council said is a total of 237 security staff members.

The county's Police Reform Task Force drafted a number of suggestions to reform the school system's approach to security:

In her report to the Education Board, the CEO said she accepted all of the above recommendations.

Parent of a seventh grader, Gerrod Taylor, hopes the school system adopts those recommendations and starts focusing its funding and efforts on mental health resources.

"We believe in transformative and restorative justice practices. We believe in investing in trauma informed practices. Anti-racism and diversity staff training for our teachers and administrators," Taylor said. "Then hiring additional counselors, school psychologists and behavioral specialists to assist our children when they are having issues or they have experienced trauma, so I think there are alternative ways we can invest in our students to really support them."

These recommendations at least in part stem from arrest data reported by PGCPS and the Maryland State Department of Education.

In the 2019-2020 school year, PGCPS reported 274 arrests, which is a continued decrease from the past three years.

The union to which security personnel belong said during that time, to enroll students in the diversion program to help get their behavior and lives back on track, staff had to fill out a J1 arrest form. So, they said 59 of those arrests should be removed from the total.

Security personnel also said that some of those arrests involved the same student, so they don't represent the number of individuals arrested. Multiple investigators said arrest is the last resort for them.

"We have a dual role. Not only are we certified police officers, but we’re also counselors, so we have discretion," lead investigator Charles Hamlin said. "We don’t want any arrested. But we have to deal with the reality that we have a victim. Someone was beat up. Someone was taken to the hospital. Someone’s tooth was knocked out, and parents don’t want to assume these charges on their own for something they didn’t cause. And they come to us and ask how they get restitution for this? And this is what we do.”

Hamlin said they work to de-escalate a situation first -- and usually are successful. He estimates that thousands more students would have been charged if they pursued an arrest every time a student committed an offense.

Still - some school board members in the past have said that they want to strip security personnel of their arresting powers.

Multiple investigators said they focus on building relationships with students that sometimes last even after they graduate.

"It’s all about relationships and relationship building with these students and it goes on for years and years to come," security assistant Arthur Bonsu said. "These investigators are still in some of these students’ lives who are playing football in the NFL now… and so these relationships are vital, and we need them."

Some parents are still not convinced that funding security personnel is money well spent.

"We do not need to police our children," parent of twin first graders Beth MacKenzie said. "We need to teach our children how to be members in our society, and that’s what all of this, and so by spending $17 million in our security budget, that could be spent in so many better ways for our students."

The School Board is currently debating this topic. We will update this story once the vote is finalized.