The search for a new DCPS Chancellor is now underway. But the process could be stalled by a lawsuit filed Tuesday. 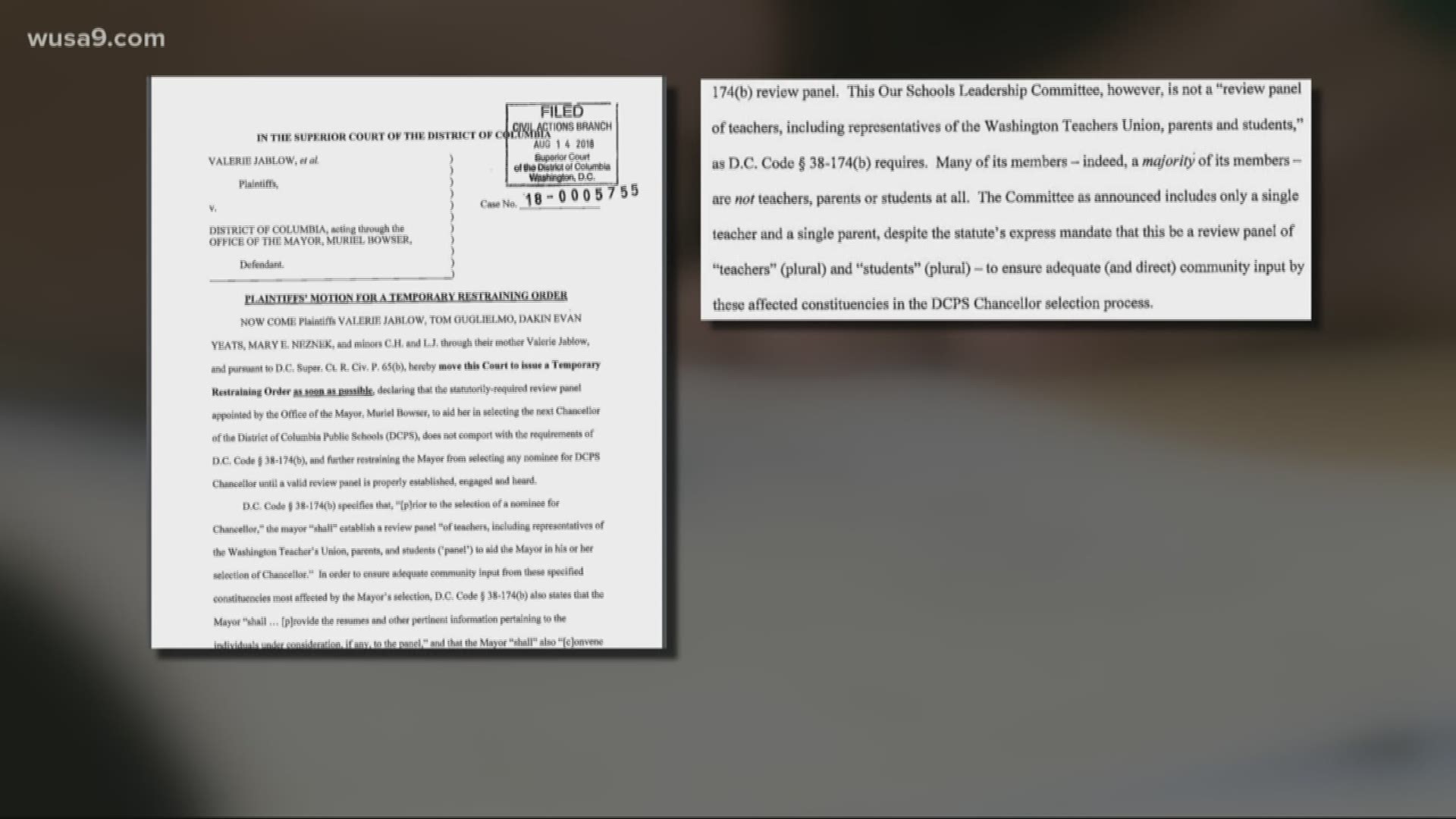 WASHINGTON - It's been six months since Antwan Wilson was forced to resign as Chancellor of D.C. Public Schools, after it became clear that he had gamed the lottery system.

The search for his replacement is now underway, but the process could be stalled by a lawsuit filed Tuesday. It's all happening with just days left in summer break for many D.C. students.

To say DCPS is in transition is an understatement, the school system has been rocked by scandal. First high schoolers were graduating when they should have failed, then the former chancellor violated his own policy by transferring his daughter to a different high school with a long waiting list. Now, a group of parents said the process to find a new chancellor has its own flaws.

In a lawsuit filed just hours before a public meeting for stakeholders to weigh in on the selection process, parents say Mayor Muriel Bowser violated D.C. code that requires teachers, parents and students be on the Chancellor search committee.

The lawsuit alleges a majority are not and that there is "an imminent risk of harm." They are asking the court to put a stop to it.

Deputy Mayor of Education, Ahnna Smith, was aware of the litigation but could not comment on the pending suit. She said, however, the 14 member board is diverse.

“Making sure the advisory committee helps us get the voices of as many DCPS and district residents as possible is her (Mayor Bowser’s) priority,” Deputy Mayor Smith said.

WUSA9 took a look at the board which includes education advocates, the teachers’ union president, a Ward 7 parent but no students.

Meanwhile, about 100 parents and teachers attended the Tuesday public meeting at Cardozo Education Campus with their own concerns.

“The expectations I believe are sometimes unrealistic but we do it we make it work and I like to say at McKinley we do a very good job at making it work but it needs to happen everywhere,” said Kenneth Lesley who lives in Ward 7 and is the engineering Director at McKinley Tech.

Hawa Coulibaly knows all about equity. Her 8-year-old son is in his 3rd DC public school in less than two years.

“The problem is the neighborhood schools are not great,” she said lamenting that you should not have to leave your neighborhood for quality education. “Especially in D.C., where they have a lot of money to improve the schools so they need to get it right.”

The committee will also take input through an online survey and a Facebook Live town hall. Click here for up-to-date information on the committee's work and the DCPS chancellor search. The Mayor expects the new chancellor to take the lead next school year. No word yet if the pending lawsuit will change that timeline.