Teachers voiced opposition to the announcement, while a coalition of 15,000 Maryland parents applauded the plan. 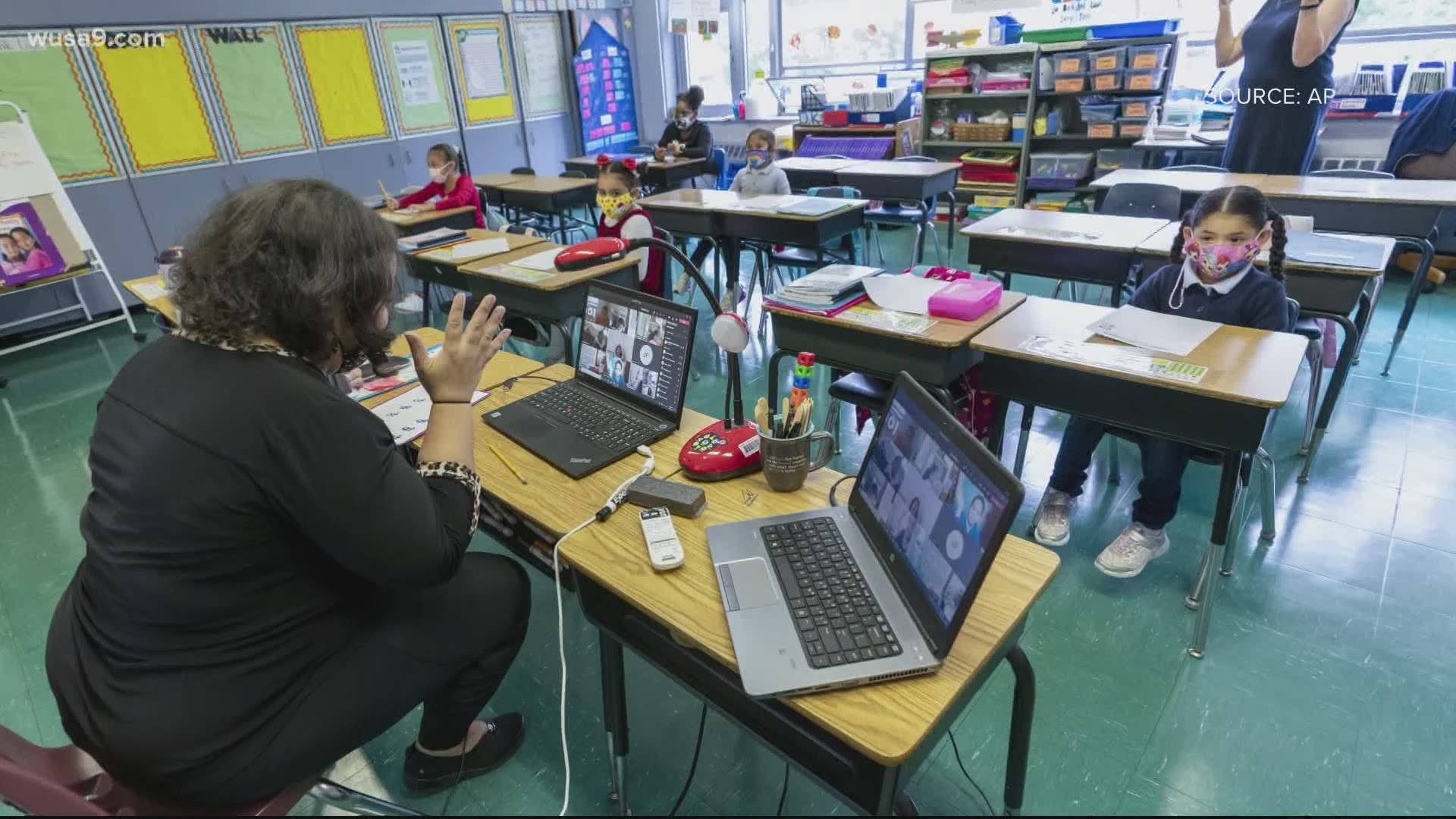 MARYLAND, USA — Following Gov. Larry Hogan's call on Thursday to reopen Maryland schools for hybrid in-person learning by March 1, teachers voiced opposition to the announcement while a coalition of 15,000 parents across the state applauded the plan.

During a press conference on Thursday, the governor claimed students were suffering a "terrible learning loss" by staying at home and the time had now come for in-person learning to resume.

Hogan was joined by Maryland Deputy Health Secretary Jinlene Chan and State Superintendent of Schools Karen Salmon, who also said they believe virtual learning brought a severe impact to students by keeping them out of the classroom. 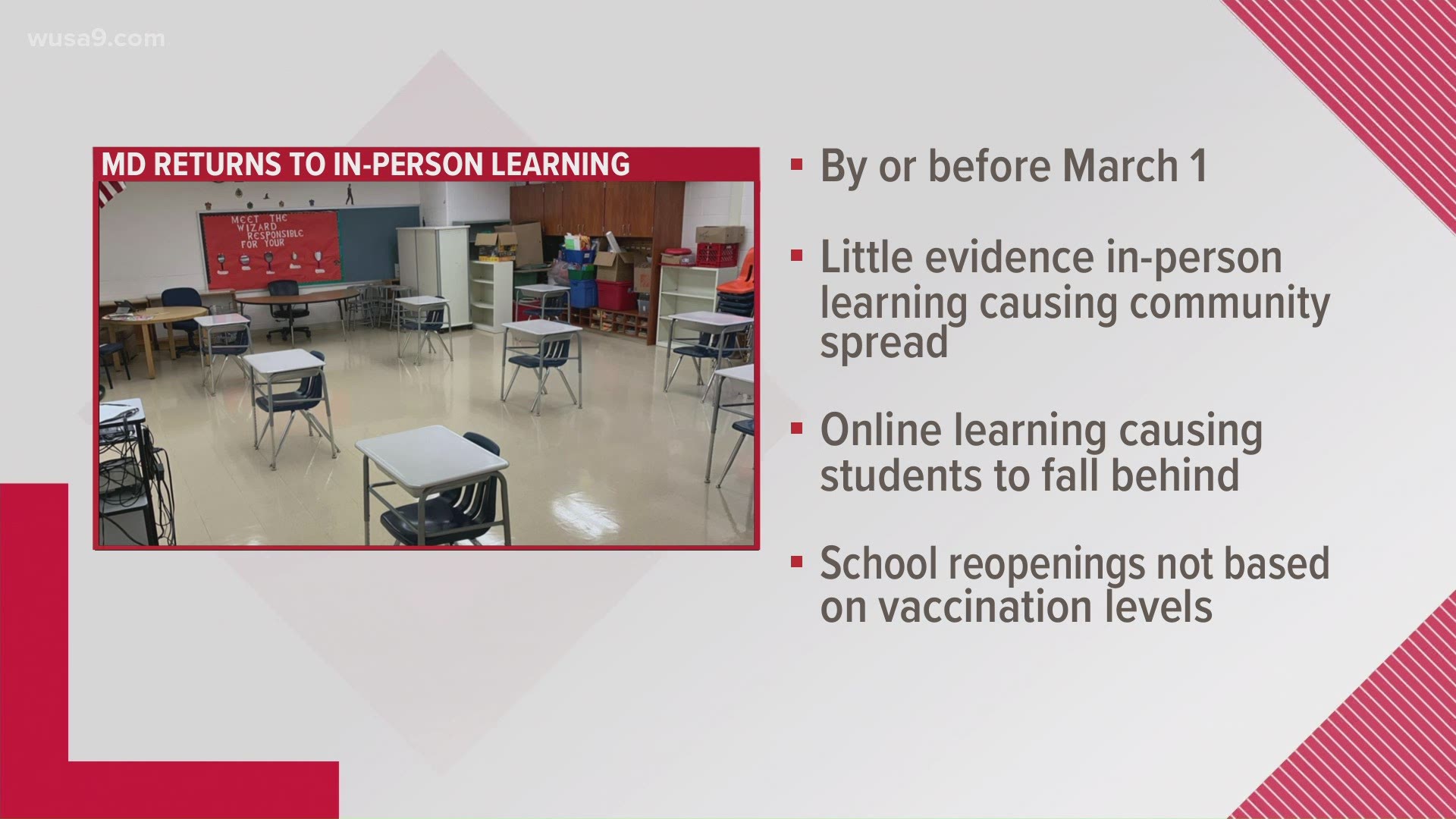 "If school systems do not immediately begin a good faith effort to return to the classrooms, we will explore every legal avenue at our disposal," Hogan said. "The time has come to get all of our kids back into the classroom and to reopen our schools.”

Hours after the governor's speech, both the Prince George's County Educator's Association (PGCEA) and the Maryland State Education Association (MSEA) criticized the push to reopen by March 1.

"We’ve had teachers die from COVID. It’s not a game for us," PGCEA President Theresa Dudley, whose organization represents over 10,000 teachers and school personnel in the county, said. "He should be working with us and not threatening our pay and our licensure.”

Dudley said that she believed March 1 would be far too soon for schools to reopen considering the issues still being addressed in the area and the logistics associated with going back to classrooms.

"In Prince George’s County, we have some ventilation and facilities issues," she said. "Our teachers want to do nothing more than to be in front of students. I think we have to be very careful about what we are asking people to walk back into.”

MSEA President Cheryl Bost echoed the concerns and said she was disappointed at the governor's comments about compelling teachers to return to classrooms.

"To come out arbitrarily with a date and then threaten legal action is just really unnecessary," she said. "It really is disconnected from the needs and the desires in the work that’s happening in our schools to what they’re sharing in these press conferences.”

Bost did not point to another date that could be more in line for returning but said metrics would play a key role moving forward.

The call from the governor also attracted support, including from the Coalition of Maryland Parents and Students. The coalition is made up of 13 organizations representing more than 15,000 parents across the state.

In a statement, the group said it was critically important for students to return to schools for in-person learning.

"We have watched as our kids have suffered severe academic loss, declining grades, social isolation and an increase in mental illness," it read. "We call on our Boards of Education to heed the bipartisan calls from both state and federal leaders today, and in days, not weeks, take action to make this a reality. The time is now, the stakes couldn’t be higher for our kids.”

Hogan noted that he cannot order county school boards to open classrooms. However, he promised to keep calling for in-person learning to return in the state.

"I will do everything I possibly can do within the law to push to get all of Maryland’s children back into the classroom," the governor said.

RELATED: SAT doing away with optional essay and subject tests

RELATED: Here's how to know if you're eligible to book a COVID-19 vaccine appointment in DC