Maryland educators will have until the end of the year to begin implementing minimum hours of live instruction. 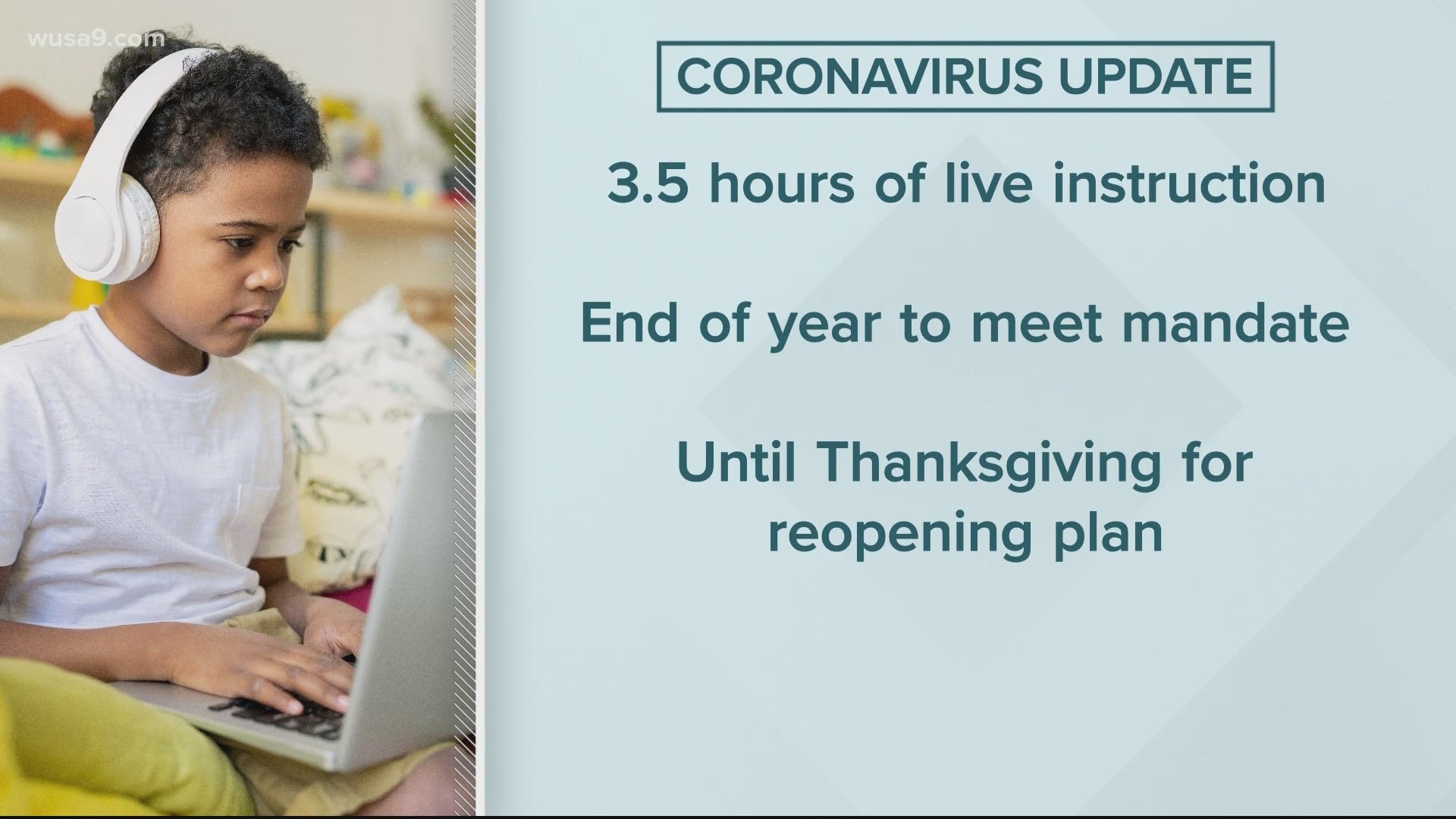 ANNAPOLIS, Md. — CORRECTION: An earlier version of this story erroneously reported the board approved "in-person instruction" rather than "live instruction". We regret the error.

Teachers across Maryland are claiming victory after the state board of education tweaked a plan that would have made some of them rip up their schedules just as school was getting started.

Educators will have more time and flexibility to implement live instruction in their classrooms following a Maryland Department of Education Board meeting on Tuesday.

That news comes after Maryland's State Superintendent of Schools Karen Salmon proposed new live instruction schedule requirements to the State Board of Education. Salmon posted her plan online Saturday, and the state Board of Education considered it Tuesday -- after school had already started for many Maryland children.

Salmon originally recommended a sliding scale of a minimum of three hours a day of live instruction for kids in kindergarten, four-and-a-half hours for middle school and five hours for high school.

Under the tweaked mandate, all schools will be required to be open for at least 180 school days, with three-and-a-half hours of live instruction per day.

Superintendents will collaborate with the Maryland Department of Education to implement the minimum hours of live instruction by the end of the calendar year. The original recommendation gave educators until the end of September.

Those schools that do not wish to return to in-person learning next semester have until Nov. 26 to tell the Board of Education why they won't be returning to class.

The Maryland State Board of Ed. has just passed schedule mandates for local schools requiring 180 days of instruction and 3.5 hours a day. If schools don't want to return in- person next semester, they have to tell the board by Thanksgiving why. @wusa9 https://t.co/zp0ZqelBdt

The Maryland State Education Association, which is the state's teacher's union, called the tweaked mandate a victory. Following the initial proposal's announcement, a petition calling for no changes to schedules got more than 20,000 signatures.

"The State Board agreed with the more than 20,000 Marylanders who signed our petition in less than 48 hours that called for no mandated schedule changes until after the first quarter," President Cheryl Bost said in a statement.

Bost said that while the agreed upon proposal is a step in the right direction, educators remain concerned about the future.

"While this gives districts time to meet new standards, we are also deeply concerned with discussions of looking to move to expanding in-person learning later this year without also expanding resources or measures to protect the health and safety of educators and students," the statement reads.

Gov. Larry Hogan has been pushing schools to reopen in person. While the new mandate from the state board of education does not impose that, it does push local schools to at least come up with a plan.

#HappeningNow The Maryland State Board of Education is hosting a special meeting virtually. You may watch it live here: https://t.co/7KIiSM7Dfa pic.twitter.com/UA3EuKf1r2

RELATED: 'I think every educator feels like a new educator' | Teachers adjust to virtual start to school