Gov. Larry Hogan said eight jurisdictions, including Montgomery and Prince George's counties, do not have plans to bring any students back to classrooms this year. 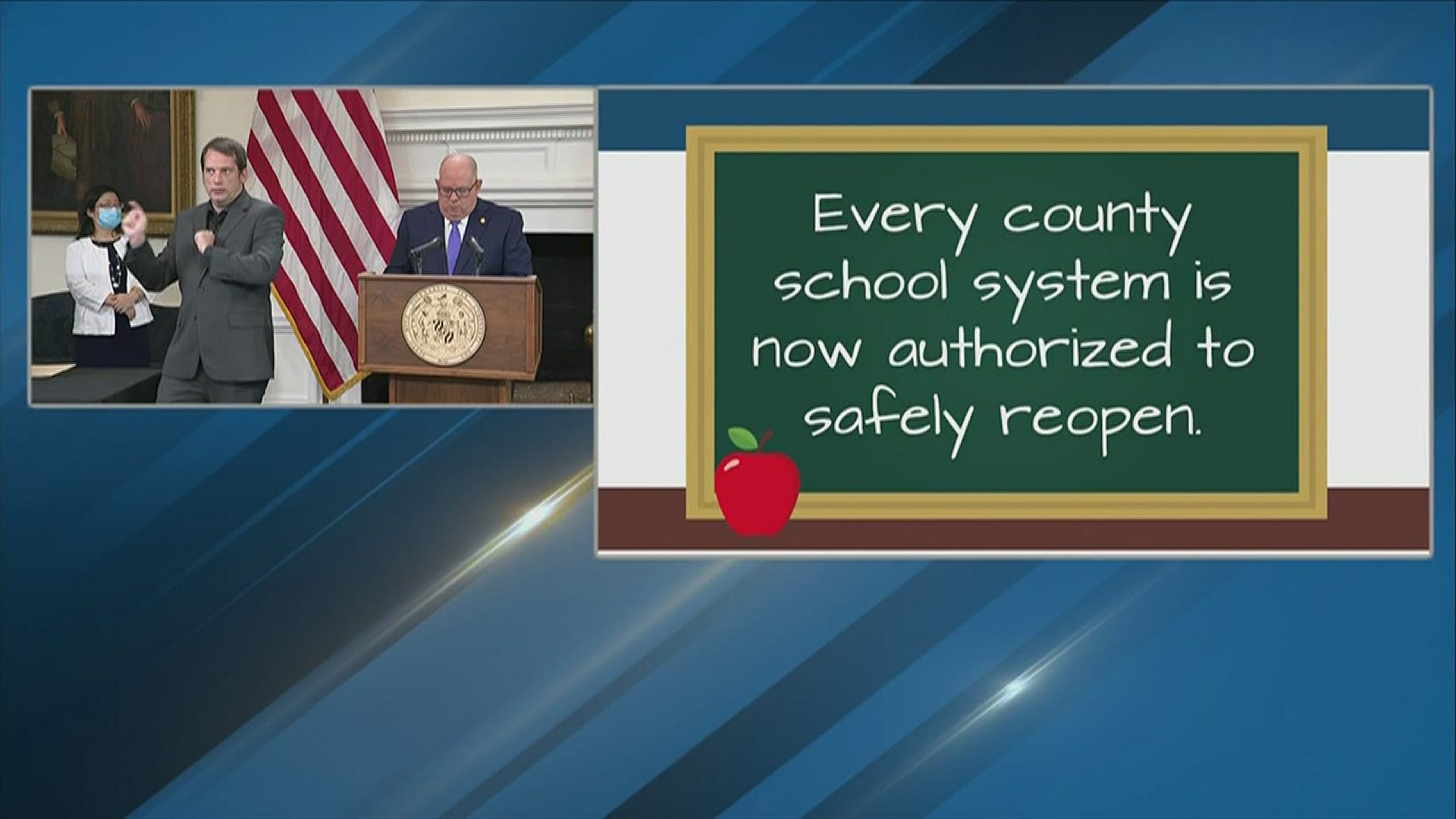 ANNAPOLIS, Md. — With most school districts in Maryland expected to resume virtual learning in a few weeks, Gov. Larry Hogan wants schools to work on bringing students back to classrooms.

In a news conference Thursday, the governor announced that, as a result of improved health metrics, he had authorized all of Maryland's public schools to begin "safely reopening." He asked that school boards look to create flexible hybrid plans to bring kids back to classrooms.

"There is no substitute for in-person instruction," Hogan said. "Every single day I hear from parents all across the state who are extremely frustrated with the fact that even though our health metrics statewide, and in every single county, look great and are continuing to dramatically improve, some of the county school boards have not even attempted to develop any safe reopening plans that would bring any kids back for any form of in-person instruction. This is simply not acceptable."

Hogan said county school boards were required to submit their final reopening plans to the state department of education by Aug. 14. Sixteen county school systems have developed plans that include returning students to schools for some form of in-person instruction this fall, including students with special needs.

However, Hogan noted that eight jurisdictions did not submit any reopening plans attempting to bring any students back to the classroom this calendar year, including Montgomery and Prince George's County.

Dr. Alvin Thornton, the board of education chairman for Prince Goerge's County, said the governor's words do not change his county's plans, which he said were made with students' needs in mind.

Statement from Dr. Alvin Thornton, Board of Education Chair, on #ReopenPGCPS: #PGCPS is committed to the health, safety and wellbeing of all students and educators. We have listened to parents and our community in making decisions that prioritize our students’ needs. (1/3) pic.twitter.com/fpRi6jTqXh

“At a time when educators are focused on working hard to make the best of this year for students, the governor and superintendent are focused on throwing school communities under the bus," Maryland State Education Association President Cheryl Bost said in response to the governor's press conference. "We need collaboration and problem-solving, not political theater. The governor and superintendent abdicated responsibility for creating reopening standards and told districts to come up with their own plans, indicating appropriate confidence that local school systems would do what is best for students. Today, they chose to ambush and second guess the hard decisions that local boards of education, parents, and educators have made to keep students and schools safe."

The Montgomery County Board of Education also said they would be continuing with their previous plans for reopening school.

"We thank Governor Larry Hogan and State Superintendent Karen Salmon for their guidance on the return to in-person instruction for local school districts," a spokesperson for the board said. "However, we are deeply disappointed by the last-minute announcement of this critical information for school systems. MCPS will begin the school year in a virtual-only instructional model on August 31, as scheduled."

Though Hogan emphasized that the state cannot force schools to reopen, those that do would receive "incentives."

The governor said that Maryland's health metrics were doing "much better" than in other parts of the country, noting that the statewide positivity rate is down to 3.3%, a decline of more than 87% since it peaked on April 17. He highlighted CDC and WHO guidance that rates at or below 5% for more than 14 days were the starting point for moving forward with reopening plans.