Several deputies hired by the Williamson County sheriff in the past three years have histories that may have disqualified them at other agencies. 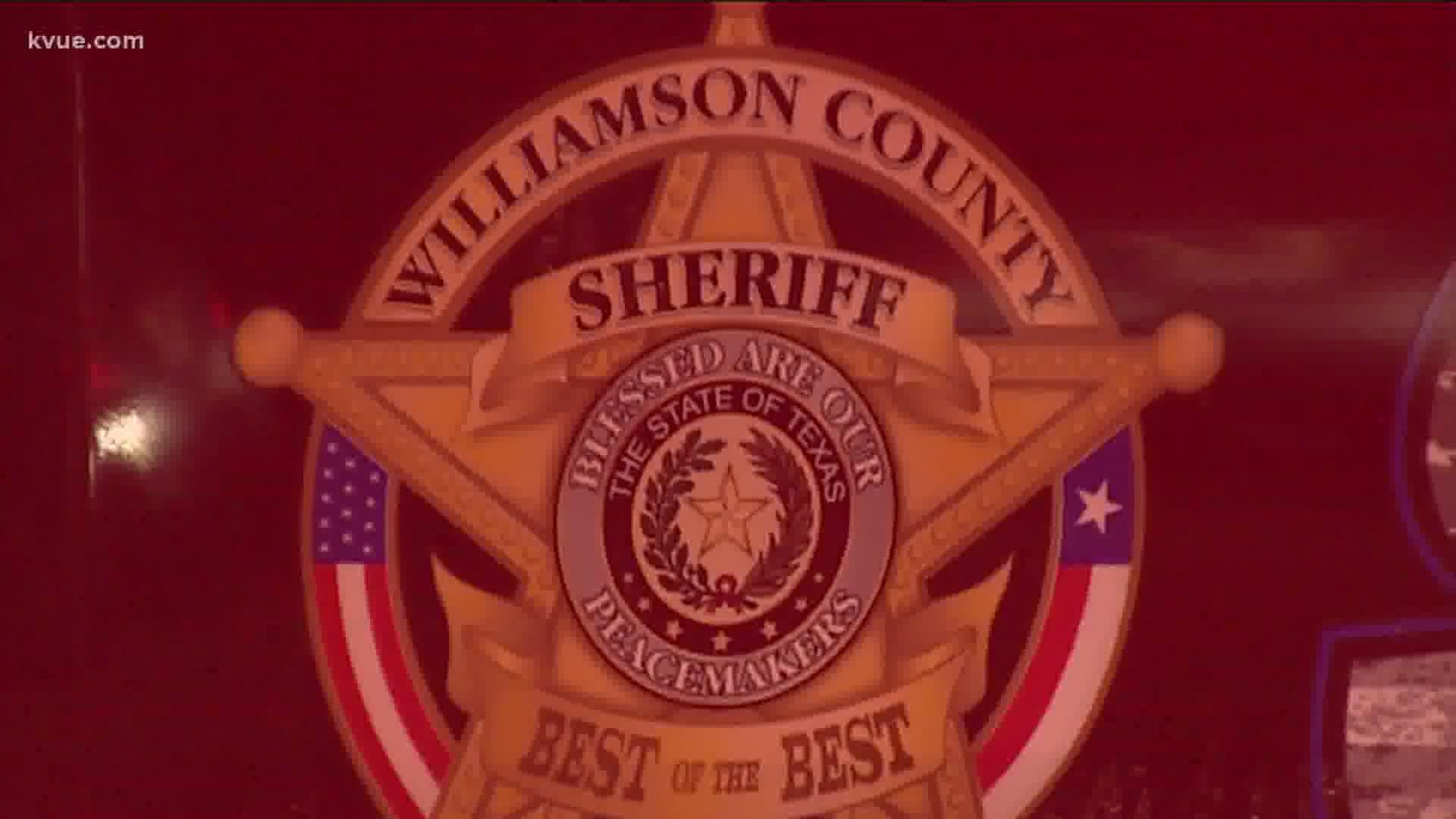 “There is probably some drug dealing obviously here,” he once told the "Live PD" audience after stopping a woman who was found to have suspected narcotics in her trunk after pulling her over in northwest Austin last year.

In another episode, he revealed as an armored SWAT vehicle rolled up to a parking lot that they were about to arrest a child sex predator, then participated as they took him into custody.

RELATED: Timeline: A history of 'Live PD' in Williamson County

Sheriff Chody swore in Luera as his newest deputy in November 2017. That was just three days after Luera, who did not return a call or email seeking comment, quit the Austin Police Department as he faced being fired following an internal affairs investigation.

Six months earlier, Luera was part of a special human trafficking detail at Austin’s airport. Records show on May 8, 2017, he swiped his special clearance badge nine times to slip his family and two friends past TSA screening for a flight to Cancun.

According to records obtained by the KVUE Defenders, Luera repeatedly was dishonest to fellow officers who confronted him, first saying that he was traveling only with family, then later telling them that his other guests were “long gone” – even though their plane sat at the gate.

Luera paid a $370 fine to Austin Municipal Court, a $2,000 federal fine, and lost his security clearance. In a Nov. 3, 2017, disciplinary report, APD Chief Brian Manley said Luera’s actions will “compromise his credibility as a witness if he continues to serve as a police officer.”

Three days later came his fresh start in Williamson County. Sheriff Chody promoted Luera to detective within a year-and-a-half, then bypassed more senior officers four months after that to elevate him to lieutenant last year.

Luera is just one of several deputies hired by Chody in the past three years with histories that may have disqualified them at other agencies. Some have continued making headlines or have become embroiled in new controversies after joining the Williamson County force.

In a statement, the Williamson County Sheriff’s Office said that “each person’s life history (background) is reviewed as part of the hiring process. This includes all pluses and minuses.”

The statement said that Luera had a “many years of honorable and meritorious service with APD including his Purple Heart along with findings in the incident where he made mistakes. All the past is considered when making a hiring decision.”

“Law enforcement officers have the power to take away a citizen's freedom and even in rare instances to take away life,” he said. “And you simply cannot entrust that to someone about whom there is any doubt that they have the proper skills and moral compass and temperament to do the job.”

Sheriff Chody appointed some of his hires with previous disciplinary action against them to top-level positions.

Commander Steve Deaton retired from the Austin police force in 2016. Two years earlier, Deaton was suspended for making inappropriate comments about a lower-ranking officer’s disciplinary case. The following year, in an embarrassing blunder, Deaton was reprimanded after leaving his badge and gun in a Target shopping cart.

Chody hired Deaton as his patrol commander. The department’s statement said Deaton came as “the most highly decorated officer from APD.”

Chody was soon left explaining to the public that he had reprimanded Deaton, who was found to have made inappropriate remarks about a female “Live PD” producer.

“Was there a comment made? Absolutely, but a comment that can be addressed with an oral reprimand,” Chody said in an interview with KVUE at the time.

Deaton then sparked outrage last summer after Williamson County residents discovered disturbing posts on his Facebook page. He used dolls and other toys to depict graphic and violent situations, leading to a community outcry at a county commissioner's meeting.

“Making bad hires, particularly in the supervisory ranks, can really cripple an organization, can really poison its culture and atmosphere,” Harris said.

But Chody’s decision to hire officers with troubled histories has also included the rank-and-file.

“This was my dream agency when I got into the job, it just took me about seven years to make it back here,” Johnson said in a social media livestream interview last year promoting “Live PD.”

Records show Williamson County previously did not hire Johnson but the department did not disclose when or why.

In 2005, he was listed in an Austin police report about an assault case that officers later deemed “mutual combat.” No charges were filed. And while working as a Bastrop sheriff’s deputy, he was suspended for crashing his patrol car in 2016.

Camden joined the agency four months after Johnson, and he brought an extensive disciplinary file.

In his last five months as a Bastrop deputy, he was on supervisors’ radars at least three times, including for possibly violating a homeowner’s constitutional rights by searching for a gun used in a disturbance without a warrant. Before that, while working for the tiny Ingleside Police Department, he was disciplined for showing up late and being dishonest about what time he was told to show up to work, records show.

Camden also had been previously turned down for work in Williamson County.

In a statement, attorneys for Johnson and Camden said, “the Williamson County Sheriff’s Department is no different than any other employer that receives multiple applicants for a posted position. The most suitable applicant is selected while the other qualified applicants are encouraged to keep applying when future positions become available. Deputy Camden and Deputy Johnson were both hired on their second application attempts when they were the most suitable applicants.”

An issue of background checks

The state licensing board for Texas police officers generally requires only that law enforcement agencies hiring an officer contact their previous employers as part of a background check. The agencies, however, are not required to heed any warning signs or red flags. In most circumstances, hiring decisions are left to the discretion of an agency.

In June, the Texas Commission on Law Enforcement completed an investigation into whether Williamson County met minimal background standards. It found no violations.

But it still noted that three Williamson County background investigators revealed that the department appeared to ignore troubling records of at least three applicants – and hired them anyway.

Credit: Twitter
Sheriff Robert Chody often tweeted about "Live PD" and the deputies portrayed in it.

“If you are looking for guys that are chasing Hollywood lights with blue lights, you’re going to get exactly what we got and that is a disaster,” Klier said.

In the past 18 months, Chody has been forced to confront the consequences of his hirings.

Johnson and Camden have been involved in two controversial use-of-force cases, both involving “Live PD.”

As the KVUE Defenders first revealed in June – the two deputies chased Javier Ambler for 22 minutes after he failed to dim his headlights in March 2019. “Live PD” crews were with them.

They used their Tasers on Ambler four times as he shouted that he had a heart condition and couldn’t breathe. Ambler died moments later, and the case remains under investigation.

Two months later, as problems piled up for the sheriff’s department, Luera led a controversial raid in the arrest of Asher Watsky in what critics said was a staged raid for “Live PD” when Watsky had just been in court hours earlier.

Then in June, Johnson and Camden – this time with Luera – were all involved in the controversial arrest of Ramsey Mitchell last June. Mitchell, wanted on drug charges, was left badly injured after he tried to run.

Their questionable use of force – aired on “Live PD” – remains under investigation by the Texas Rangers.

Chody has taken no disciplinary action against any of the deputies.

In June, Chody fired Kleir, the association president, over what Klier says was a misunderstanding about whether he received a direct order.

Now able to speak freely, Klier said Chody’s hires are taking the department in a direction he said should alarm everyone in Williamson County.

“What does right look like for the Williamson County Sheriff’s Office?” Klier asked. “What is our moral barometer? I will tell you, after being here for six years, I can tell you it is going the wrong way.”

Some COVID-19 tests costing thousands of dollars in Austin

No, you probably haven't found an Asian 'murder hornet'