Police: 7 boys, ages 13 to 16, arrested after leading police on chase in carjacked SUV

The chase ended in a crash, and all those involved were taken into custody, police say. 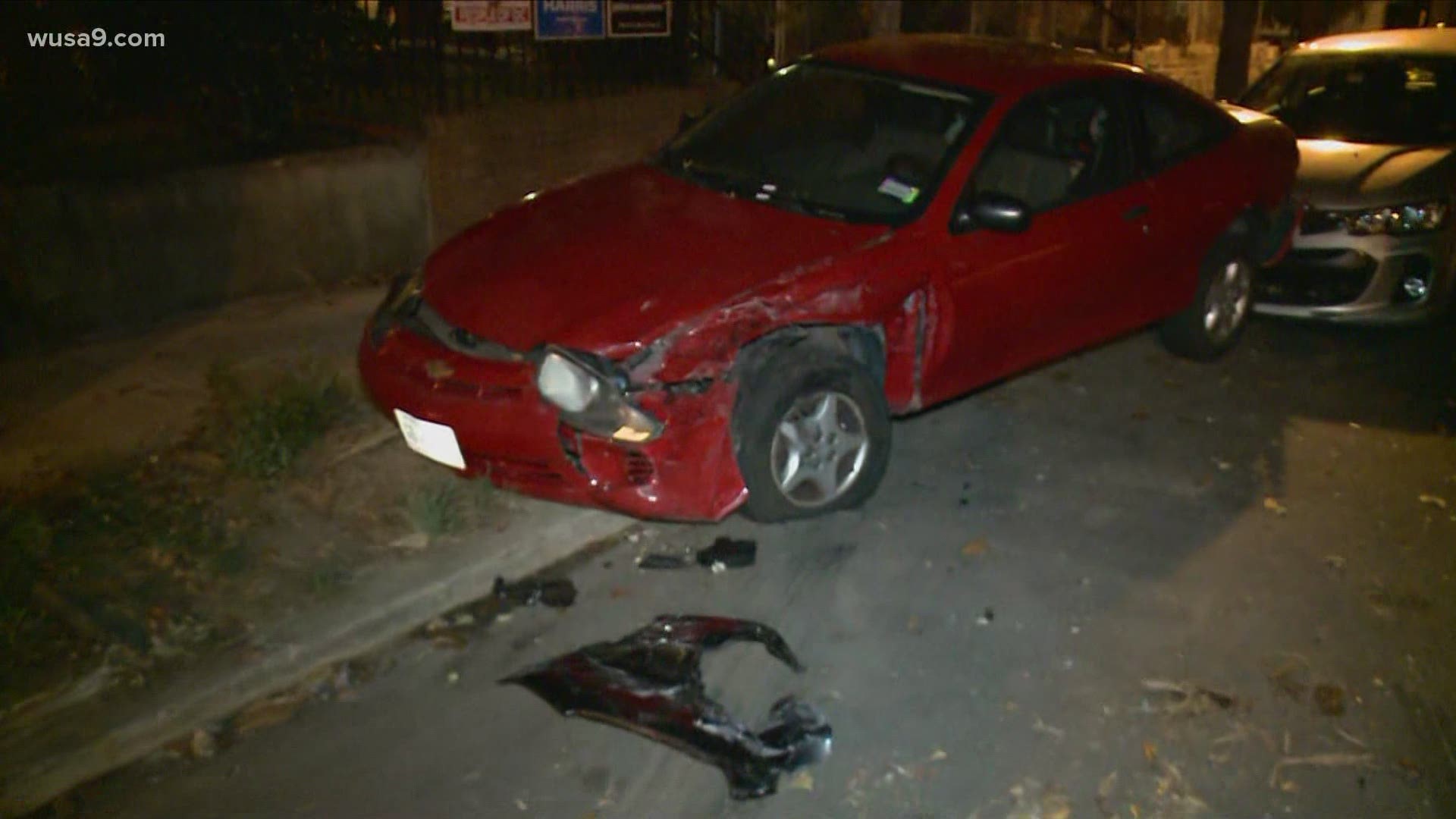 WASHINGTON — Seven teenagers were arrested early Tuesday after a carjacking and a short car chase that ended in D.C., according to the Metropolitan Police Department (MPD).

Seat Pleasant Public Information Officer Marcus Jones said it all started when an armed carjacking was reported in Prince George's County Monday. Jones said that officers spotted the stolen SUV, and attempted to stop it, but when the vehicle did not stop, a pursuit ensued. The chase made its way into D.C. around 11 p.m. Monday night and ended when the stolen SUV crashed into parked cars at 14th Place and C Street Northeast.

"Oh it was loud -- super loud," a neighbor who asked to remain anonymous told WUSA9 reporter Matthew Torres. "It startled the whole street."

The people inside the vehicle took off running but were arrested about two streets over. No injuries were reported.

A neighbor's security camera video shows the SUV crashing into the parked cars in Northeast, and the boys bailing out afterward.

DC Police said that seven boys between the ages of 13 and 16 were arrested, including a 13-year-old who was behind the wheel. DC Police officials said early Tuesday that the 13-year-old would be charged with reckless driving, as well as leaving after colliding, unauthorized use of a vehicle, fleeing from a law enforcement officer, and driving without a permit.

Three 14-year-old boys, two 16-year-old boys and a 15-year-old boy were charged with unauthorized use of a vehicle. Additional details about those involved were not immediately available because they are under the age of 18 years old.

MPD is working on warrants to extradite those arrested back to Maryland.  Seat Pleasant Police Department is the lead agency in charge of the investigation, with MPD in a supporting role.

The Seat Pleasant Police Department said it recovered the SUV, which had been stolen two days earlier during an armed carjacking at a convenience store in District Heights, according to Deputy Chief Demetrious Harris.

"We don't want to be reactive but proactive in our approach," Harris said.

This is just the latest in a trend of carjackings involving young people.

The most notable of these cases involved a 13-year-old girl and a 15-year-old girl who attempted to steal a car belonging to UberEats driver Mohammad Anwar. Anwar was killed, and both teenagers pleaded guilty to murder in the case.

According to the latest crime data from MPD, motor vehicle thefts in D.C. are up 30% since this time last year. From January 1, 2020-June 28, 2020, there were a total of 94 carjacking offenses that occurred in the District; 10 adults and 12 juveniles were arrested for carjacking during that time. So far this year, 168 carjackings have been reported in D.C., with 14 adults and 47 juveniles arrested, according to MPD.

Harris said his team is part of the task force, and noted that carjackings are down in Seat Pleasant compared to last year, but said his officers are finding more cars involved in violent crimes across the city.

"We need to come together regionally to come up with reasonable solutions," Harris said. "And not always about enforcement standpoint but how we prevent crime in the first place."