No one was seriously hurt despite families walking the area when a gunman fired multiple rounds at two people in an SUV, police say. 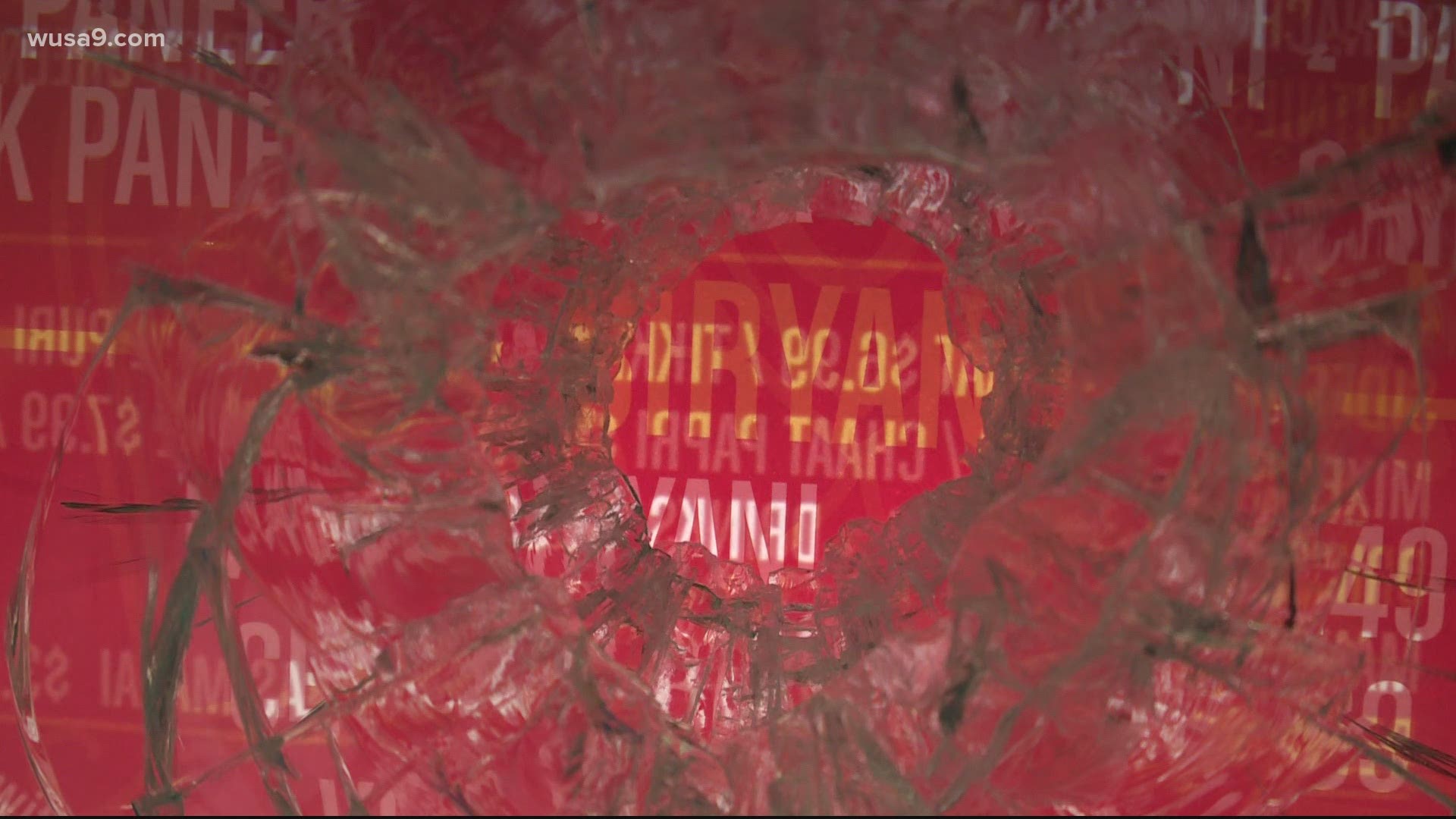 HYATTSVILLE, Md. — New surveillance video captured the moment a gunman unloaded a barrage of bullets at a normally busy and peaceful Arts District in Hyattsville.

The incident happened around 9:30 p.m. on Thursday as families were walking around and businesses were filled with customers.

Surveillance video shows a family walking past a vehicle outside a restaurant at the corner of 45th Avenue and Jefferson Street when a man by the passenger side door is seen firing a gun multiple times.

Acting Police Chief Scott Dunklee told WUSA9 the gunman was with two other culprits who were targeting two people in a vehicle after they left a nearby restaurant.

"When the two people picking up the food came out of the restaurant, the three suspects jumped out and one had a gun and started shooting," Dunklee said. "It's actually shocking nobody was hurt because the streets were crowded with families."

TERRIFYING: @HyattsvillePD released surveillance video the moment a gunman unloads a barrage of bullets in the Arts District. You can see families with children out and about running for cover. They're looking for three suspects allegedly targeting two people. @wusa9 pic.twitter.com/eRaOIiNfuF

Police don't believe the shooting was random and stressed the neighborhood is still safe. Neighbors also agreed that the community has normally been calm and family-friendly.

"People were screaming and yelling and tables were flying and glass was breaking."

This woman was celebrating her 30th birthday at Busboys & Poets in Hyattsville last night when multiple gunshots erupted in the Arts District. She and many others had to duck for cover. @wusa9 pic.twitter.com/3WSqgYD2Jt

Chiereme Fortune was celebrating her 30th birthday during open mic night at Busboys & Poets when they heard back-to-back gunshots before the host yelled for them to hide.

"He said 'Get down!' so people were screaming and yelling and tables were flying and glass was breaking," Fortune recalled. "We just stopped because after that, there were nine more rounds and it stopped. The tables were flipping over so we fell back under the table and kind of just stayed there."

Photos shared on Twitter by other people nearby, including Francis Manuel Abbey, showed the aftermath of the gunfire. One photo shows a bullet hole left in one businesses window.

Police described the gunman as a thin, tall, medium-complexion black male with a short haircut armed with a rifle and wearing a white t-shirt, jeans and white sneakers.

The suspect entered the front passenger seat of a white, newer model BMW SUV with tinted windows, sunroof and silver rims, according to investigators. The vehicle was last seen heading northbound on Baltimore Avenue. Two other suspects were in the SUV. One is a light-complexion black male with short dreadlocks wearing a yellow tee-shirt, jeans and a “trucker” style cap. The third suspect is a black male with short hair, prescription-style glasses, a VNeck T-shirt and walked with a limp.

Dunklee said they are also looking for the vehicle that was targeted in the shooting. This vehicle was a dark gray SUV, possibly a Toyota Highlander. This SUV should have a missing driver’s side mirror that was damaged in the shooting.

Police have now beefed up surveillance in the area.

“The Hyattsville Arts District is a vibrant business and residential neighborhood frequented by families and young professionals,” City of Hyattsville Mayor Kevin Ward said. “Endangering the public in any way is inexcusable. We are grateful no one was physically hurt but recognize this may negatively impact the psychological wellbeing of residents and visitors to our city. Hyattsville is a strong-knit community. Crime is not tolerated here. We will come together to support each other as police work to solve this case."

Ward also heard the gunshots since he lived down the street. He was shocked knowing his son would normally be walking the dog around the time of the shooting.

WATCH NEXT: Five DC teens arrested for a string of armed robberies