'Huge void that can't be filled': Family mourns loss of 10-year-old girl who drowned at winery

Danika Ross died in July after being sucked into a pipe in a man-made lake in Quincy, Washington. Her family is suing for wrongful death. 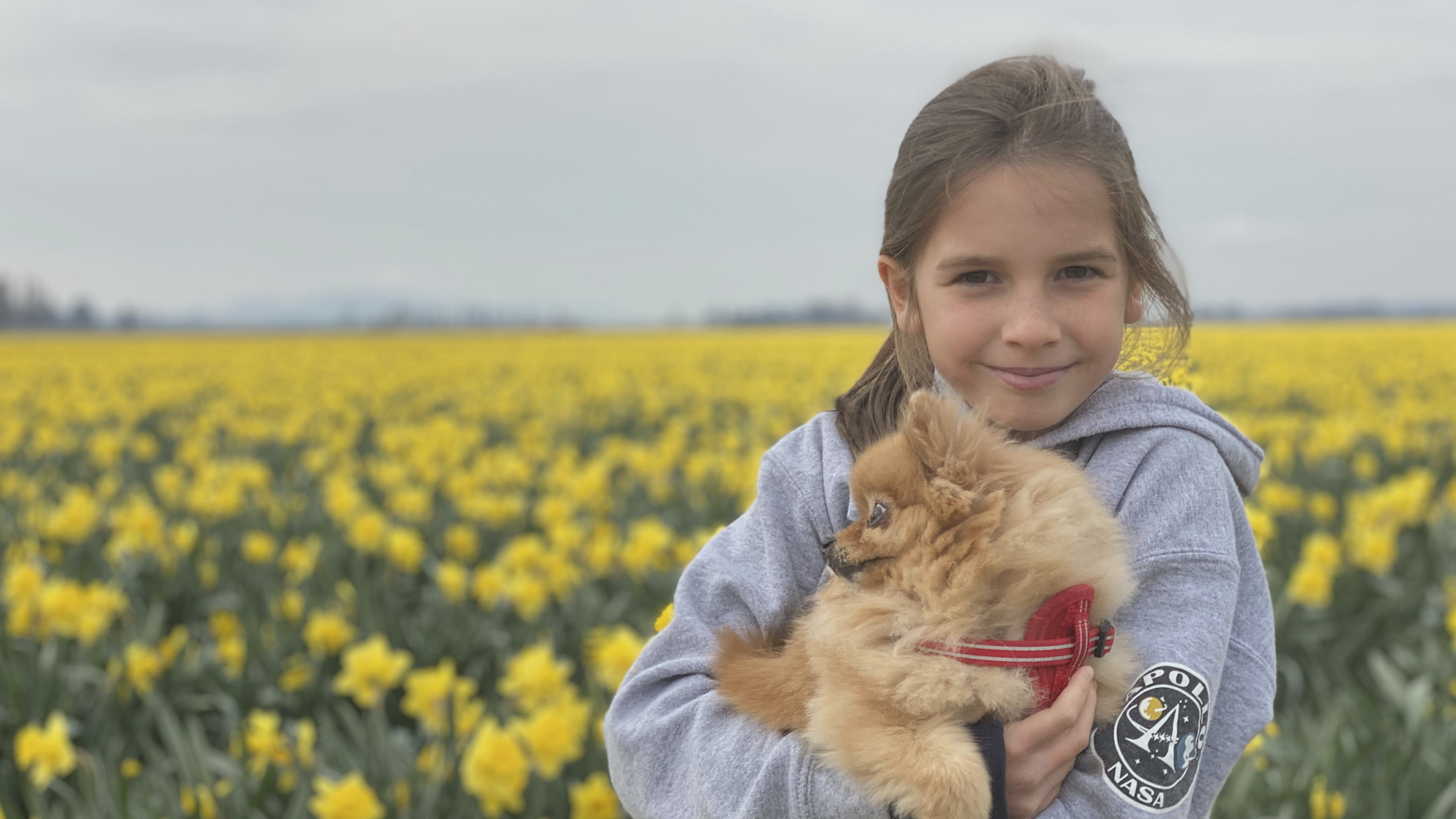 The family of a 10-year-old-girl filed a wrongful death lawsuit mere weeks ago, but the parents chose to speak to KREM 2 about the loss of their daughter.

Danika Ross's death has stunned the community. Now, her family is left to pick up the pieces of what was once their life.

They read the parenting books. They taught their kids not to talk to strangers, to look both ways before crossing the street and to always wear a seatbelt. Unfortunately, Margarita and Simon Ross could never have known to prepare for this.

"You can't imagine that this is happening," Margarita, Danika's mother, said. "Most Hollywood writers can't come up with stories like that; how horrible it is, how unimaginable and unpreventable.

Danika Ross, 10, traveled with her family to Quincy, Washington for summer vacation but this trip ended in tragedy. She drowned after being sucked into an irrigation pipe in a man-made lake.

"It's like a huge void that can't be filled," Simon, Danika's father, added. "That's what makes this so difficult to process. It's like, there's nothing that would prepare you for it."

The family is now suing the property owners Cave B and Familigia Water District, citing their negligence as the reason for their daughter's wrongful death. Despite the Cave B website advertising swimming in the water, this lake "was literally a death trap," the lawsuit claimed. Cave B's website says the lake is for both recreation and irrigation for the winery.

The pipe was not grated, it was larger than necessary and there were no warnings, signs or other indications that an ungrated pipe was located within the lake, creating suction, the suit added.

"It's difficult to imagine your child's death," Margarita said. But to hear how it actually happened, and thinking what she went through in the last moments of life, makes it way more horrible."

Her death was caused by asphyxiation from drowning and also compression of the torso from the pressure in the pipe, the Grant County Coroner's Office told KREM 2. The coroner was not sure what happened first, but the lawsuit said the death was "painful, gruesome, terrifying, and senseless."

RELATED: Family of 10-year-old girl who drowned in lake at Washington winery sues for wrongful death

After being sucked into the tube, the ten-year-old was "thrust down into a 90-degree bend in the pipe," and then "her body was transported nearly 70 feet up the hill via the mechanical pump mechanism," the document said.

The document also shared that the siblings and young family friend watched helplessly as Danika was pulled into the pipe, as the girl was yelling for help. Her 7-year-old sister, who was six at the time, tried to save her but didn't have the strength to beat the suction, attorney Anthony Marsh of the Herrmann Law Group said. The mother of the family friend who was watching all the kids jumped in to try to find Danika after she disappeared, but she was gone.

"It's our own grief to deal with, and on top of it, the grief of the kids," Simon said. "We have to use imagination, all the time to help the kids deal with this. My seven-year-old, she brings about more than once an hour. She writes poems to Danika. When we go to the store she buys her toys. She talks about how Danika is doing in heaven."

Danika leaves behind her parents, six siblings and half siblings and close family friends that are basically relatives in Issaquah.

"And the other thing is, younger kids, in particular, they bring up all the time now," he added. "[They say]' I have to be careful because I don't want to die like my sister.'"

"Sevastian always talks about Danika because he was the last one to hold her hand," Margarita said about their eight-year-old son. "In the morning, he'll be like 'oh I saw Danica in my dreams, I miss her so much.' He is non-stop talking about her."

Danika wanted to be a veterinarian, but also loved creating videos on TikTok and Youtube. She included her siblings in the videos, becoming the heart of the family. Without her, the family said they feel empty.

"There is no hope," she said. Like, every day I think it maybe becomes a little bit easier, but it's not. I know what they say of 'time heals' but I know it's not going to. I don't know if it'll ever be enough [time], because every day I realize more and more that that's it, that's how we're supposed to live now."

1 / 12
Margarita Ross
Danika Ross died in July after being sucked into a pipe in a man-made lake in Quincy, Washington.

The family is suing Cave B, Familigia company and their water district and several other people affiliated with each organization for negligence. The lawsuit states the defendants were responsible for the "design, installation, and maintenance" of the pump and for promoting the lake for recreational use without warnings of danger from the pipe.

In fact, the suit added that a website advertisement for renting a house on the lake said “the back patio sits steps from the lake with plenty of seating for your group, an electric BBQ and large gas fire bowl. Beach towels, two inflatable paddleboards, and other water toys are included for your enjoyment. The lake is man-made and lined. It is used to irrigate the vineyards and is refilled as needed with fresh well water.” The advertisement now has a disclaimer following the original statement. Cave B added, "Currently the lake is not for water activities or swimming." The suit also added that the pipe system was not compliant with state and federal law.

"We relied on other people's due diligence," Simon said. "It wasn't there. Everything is strict, especially when you're talking commercial and for a multitude of agencies, permits, engineering. We get accustomed to believing in protection by authorities, by a local government, that certain things are checked, inspected, approved and then implemented. We rely on that as citizens. We try to do our due diligence, as well. We follow the rules. We abide by laws of the society. Therefore we are responsible for each other's safety, in a sense, even when you drive on the street. If you don't follow these simple guidelines, you may hurt somebody. But this one is way worse because you build something and you put it in the area where there's such a big exposure to all kinds of usage, all kinds of application."

The defendants’ negligent acts or omissions were the cause of the wrongful death of Danika Ross, the lawsuit claims. The family has "sustained economic and non-economic damages," including past and future medical expenses, past and future lost income or earning capacity, emotional distress, grief, loss of enjoyment of life, mental anguish and pain and suffering, the suit added. The Ross family has sustained damages including the loss of accumulation of income and incurred medical, funeral, and burial expenses, and the conscious pain, suffering, anxiety and fear of impending death experienced by the decedent," it continued.

Anyone's child swimming there could be the victim of this, the parents said.

"It's difficult to process," he said. "It's like, what else can I do to protect my kids going forward?"

It is impossible to put the price on the death of a child, but the family is asking to also raise awareness to other parents. They said, this could have been anyone else's kid, but theirs happened to pay the ultimate price. Both the parents happened to be away due to a family emergency, which they now say they could turn back time. Margarita found out in a phone call from one of Danika's older half-sisters, Alina, 30. Simon was dealing with a family emergency back in the Seattle area and Margarita was a few hours away.

"Alina said there is an emergency situation," she said. "We prepared for the worst, but I couldn't imagine what I was supposed to imagine myself for.

"I called her right away. She said, 'oh I'm sorry, but it seems like Danika drowned. I said 'there's no way it happened because she's a great swimmer. She would be on the lake a few times a week her whole life. There was no way. Maybe she is hiding somewhere.' I ask her to keep me posted. I start to come back."

"[These were the] worst, two to three hours of my life, because you do hope, you really hope," she continued, through tears. "And every phone call you get, that's it. She is just gone, and you can't do anything about it anymore."

"I got a picture of the sunset where all the kids are on the shore of that little lake on the beach during sunset," Simon added. "Then, about 10 minutes, or 15 minutes later, I get a phone call that I wish I would never get my life."

Credit: Margarita Ross
Danika Ross died in July after being sucked into a pipe in a man-made lake in Quincy, Washington.

While Margarita was on her way, the family friend remained in the water, searching for Danika. The friend was brought out by rescue personnel.

"[The friend] later had a nervous breakdown and had to be admitted to the hospital for evaluation. After it was clear she was missing, the family and good Samaritans engaged in a desperate search for her, linking arms and scouring the lake for any sign of her body. None would be found," the lawsuit said.

Eventually, the 10-year-old's body had to be recovered by opening the pipe around 75 feet from the lake, the Grant County Sheriff's Office investigation said. Her body had to be extracted from the pipe by firefighters, they added.

"For us, it's just picking up bits and pieces of what's left of our lives," Simon said.

Once a person dies, Russian tradition states that the person's soul will linger for up to 40 additional days on Earth. Danika's memorial service took place 40 days after her death, which just happened to be her 11th birthday.

KREM 2 reached out to Cave B numerous times but did not receive a response. KREM 2 was unable to make contact with Familigia. The King County Superior Court lists the case to go to trial in the summer of 2022.

A Washington family says their 10-year-old daughter's drowning was no accident. The girl died in a man-made lake in Quincy back in July.

Now, in newly filed court documents, the family says a winery is liable for her death.