Several armed robberies in DC appear to have been committed by teenagers, police say

The Metropolitan Police Department arrested four suspects Wednesday, who they say could be linked to 12 robberies overnight. 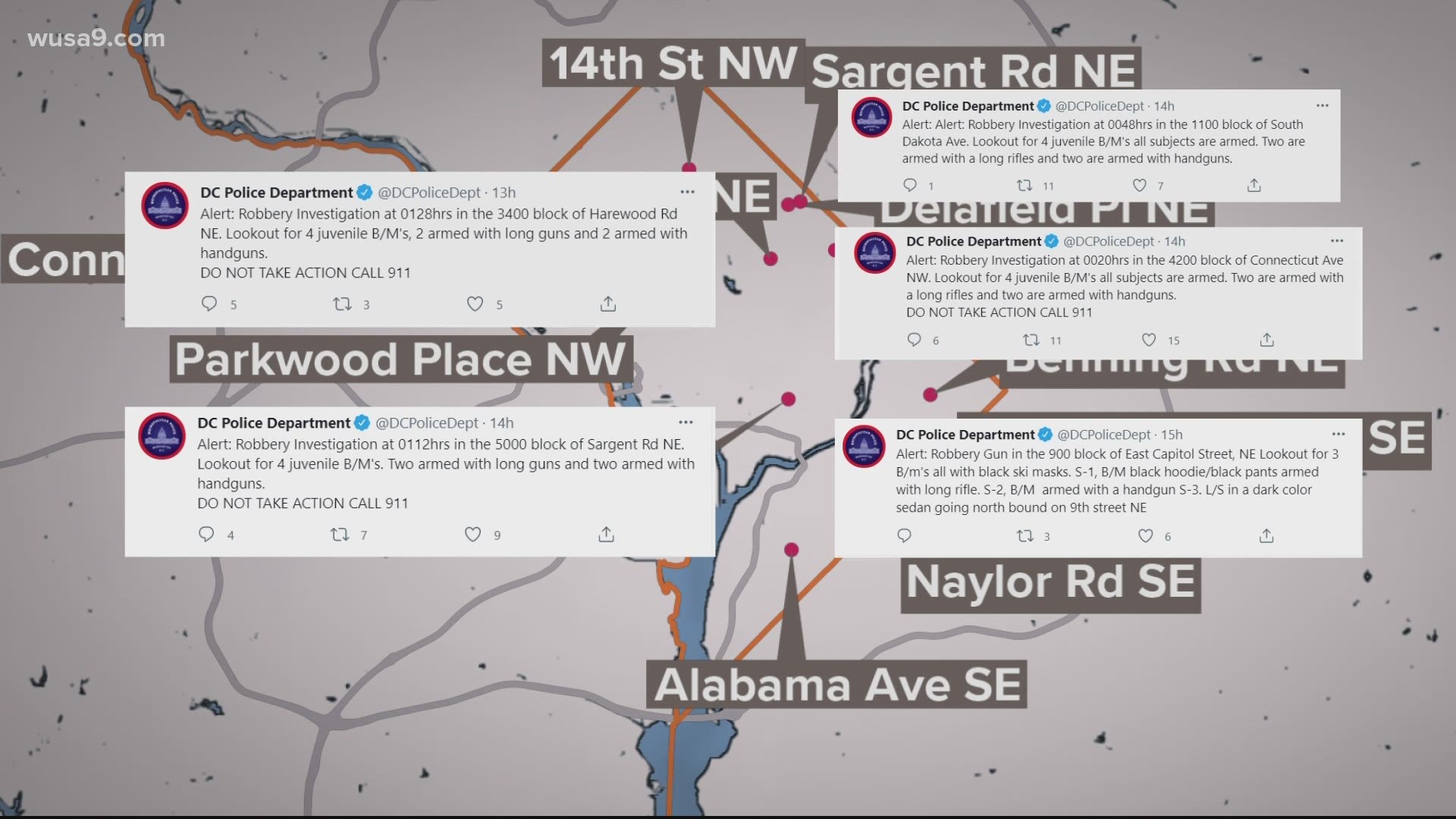 WASHINGTON — The Metropolitan Police Department is busy investigating several armed robberies and one attempted robbery believed to be committed by teenagers, in just a few hours on Tuesday night and early Wednesday morning.

Police said Wednesday afternoon that they arrested four suspects in the string of robberies, but it is unknown if the suspects are all teens at this time.

Chief Robert Contee said the carjacking track force tracked them down this morning.

He said they believe the suspects could be linked to up to 12 robberies.

There have been at least six armed robberies and one attempted armed robbery by a group of juveniles, police said. MPD's 4th District Watch Commander told WUSA9 that the group appeared to be targeting people on the street for cash and belongings.

MPD Watch Commanders told WUSA9 that four of the armed robberies happened in D.C.'s 4th District. No injuries were reported in those incidents.

The police report said phones, wallets, IDs, and a purse were taken.

Police arrested 4 suspects in connection w/ up to 12 of these robberies today.@DCPoliceDept found them sleeping in a car with at least 1 gun and personal property.

Still working to learn if teens were involved.

What we know on @wusa9 at 5.https://t.co/GzzQnsXOhP

Neighbors who live near the 900 block of East Capitol Street NE were shocked to hear about the robbery.

“You don't want that type of thing happening anywhere, but particularly close to where you live," Damian Conway said. "So very concerning to hear that.”

Kristin Owen said she often walks her dog alone at the time the two women were attacked.

“I usually feel really safe walking around. And there's often a lot of Capitol Police out because we're just a couple blocks up from the Capitol," Owen said. "So, I'm really surprised to hear the robbery.”

From now on, she said she'll probably walk her dog earlier in the night or with her roommate. She even bought pepper spray Wednesday morning.

Other neighbors said they plan to purchase security cameras now through the city's rebate program.

MPD tweeted out information for a few other robberies that occurred overnight. One happened at 2:30 a.m. in the 1300 block of Parkwood Place, NW. Another robbery that happened just before 1 a.m. in the 800 block of Delafield Place, Northeast, involved five suspects all wearing masks and armed with rifles and handguns, according to police.

Another robbery investigation is happening in the 2500 block of Pennsylvania Avenue, SE, but the victim in this case was not able to provide much detail about the suspects so it's not clear if this case is connected to the others, according the MPD 6th District Watch Commander.

Police have posted lookouts for multiple possible getaway vehicles used in the crimes. One is a black compact SUV, like a Hyundai or Honda CRV. The other is a black sedan. A Watch Commander with MPD's 6th District said it's possible the suspects are switching vehicles and targeting areas that are not well lit.

It's too early to say for sure whether the robberies were all committed by the same group of teens, but detectives are looking into the possibility of them being connected, police said.

The total number of robberies District-wide year to year is staying steady, but more criminals are using guns, according to DC Metropolitan Police data that WUSA9 examined.

This year from Jan. 1, to July 14, there were 897 robberies throughout the city. Last year for that same stretch of time, there were 890 robberies according to the crime stats. When it comes to robberies using a gun, MPD reports 102 more this year compared to last citywide.

In MPD's 4th District alone, which includes upper Northwest and most of Northeast D.C., there were four armed robberies Tuesday. So far in 2021, that area has seen 66 armed robberies, which is more than twice what it was in 2020.

To view crime in your DC neighborhood, click here.

RELATED: There's a 102% increase in carjackings in Prince George's County. Here's what authorities plan to do about it