Anne Arundel's new top cop is a gay, Black woman who is transforming her department to reflect the priorities of the people. 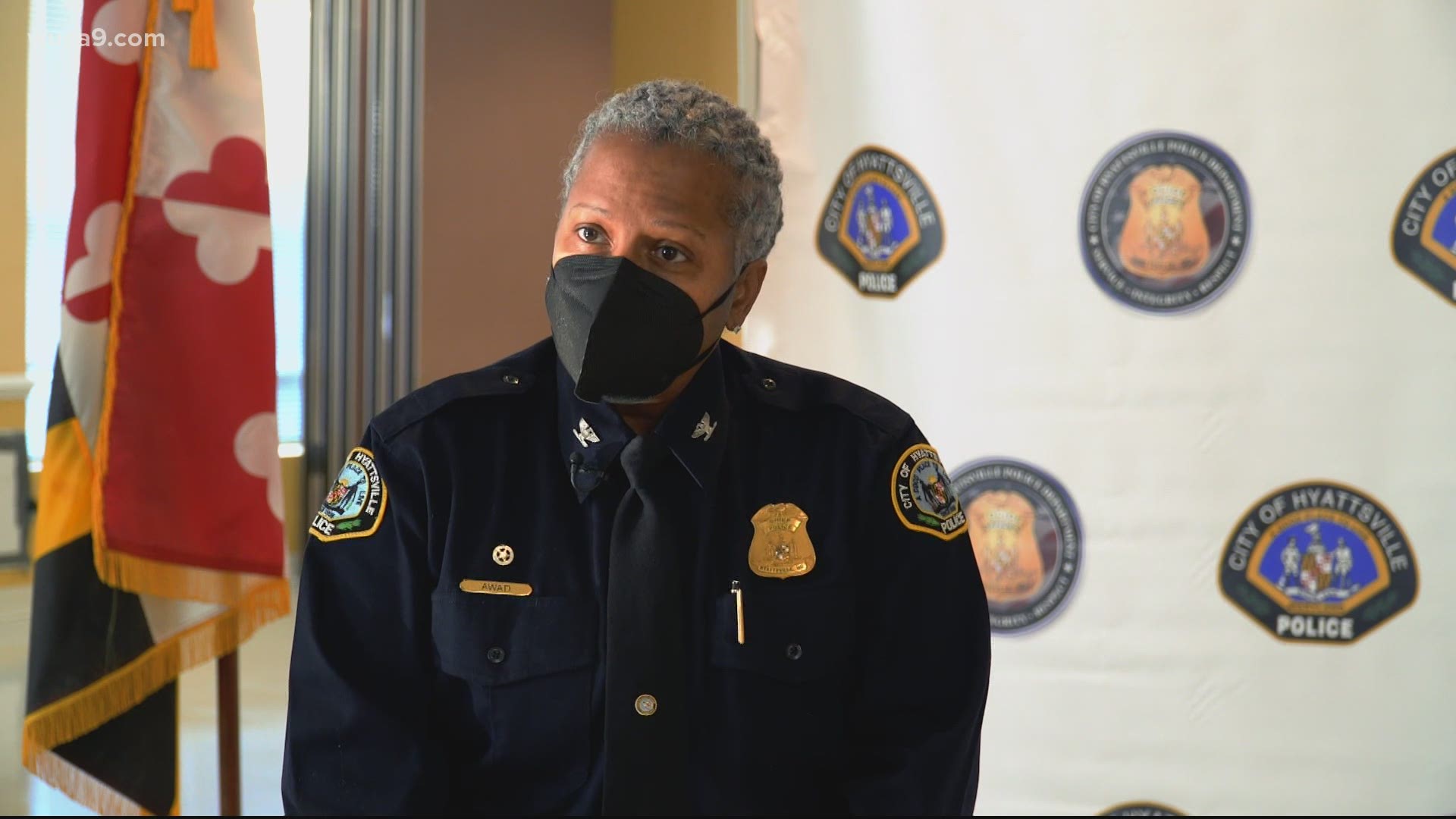 HYATTSVILLE, Md. — You would forgive newly minted Anne Arundel County Police Chief Amal Awad if she zoomed straight to the point.  As the incoming police chief in a county of 580,000 residents and nearly 800 sworn law enforcement officers, Chief Awad has an overflowing list of people and priorities that demand her attention.

I wanted to talk about her mother. About her upbringing. About how a young girl who grew up with six siblings to a single parent could ascend the law enforcement ranks so quickly and at the age of 53 assume her second command post.

"I look to my mom," Awad replied when asked about her career ascension. "Her strength, her wisdom, the way she raised us."

RELATED: 'I am not leaving because I want to': Anne Arundel Co. police chief announces surprise retirement after 20 years

Credit: Amal Awad
Chief Awad as a Major with the Prince George's County Police Department with her mother.

As an African American child growing up in Washington, D.C. and in Prince George's County, Awad recognizes the wide range of experiences kids can have when they encounter a law enforcement officer for the first time.

"I experienced contact with the police, not to the degree that some people can obviously share with you," Awad said. "As a kid being out late at night on a basketball court with the other kids, the police were called to usher us along. We were teenagers and we shouldn’t have been out that late. But I was always taught to respect authority. My mother shared with us that when you’re stopped by the police, give them respect as you would give any adult and you comply. I didn’t know what that meant then. It wasn’t until I got older that I realized she was trying to keep us safe."

RELATED: At least 4 local police chiefs have resigned this year as nation grapples with systemic racism

Credit: Amal Awad
Chief Awad and family in her promotion to Major at PGPD

A wide range of Awad's police experience and philosophies were discussed by the Anne Arundel County Council before their unanimous vote on her approval on Dec. 7 She assumed command of the department on Dec. 17.

Of particular interest is her embrace of increased police resources that deal with mental and behavioral crises.

"I support a co-responder model where an officer is paired with a clinician," Awad said. "There’s a certification crisis intervention training that I’m looking to get our officers so when they’re responding to these incidents they’re able to see a behavioral issue or mental health issue. Clearly they can't diagnose it, but identify when someone’s in crisis, and give the person space, time and distance to reassess what we need to do to help."

In a first for the Hyattsville Police Department, Awad hired a civilian, Adrienne Augustus, for a dual-purpose role: to serve as both the department's public information officer and as its mental health programs manager.

"Our officers have unfortunately become not just agents to protect and serve but social workers," Augustus said. "And they shouldn’t be. I think we all know that."

Augustus is also the founder and President of A Beautiful Mind Foundation, a nonprofit group that helps connect minorities with mental health services and treatment.

CONGRATULATIONS TO OUR GRANT RECIPIENTS!
Sat. we announced the first #ABMF grant recipients. Thanks to our generous donors, #ABMF was able to award $22,315 to 20 organizations in 10 states and D.C. See the full list here https://t.co/7VQM7z0L5L #MinorityMentalHealthMonth pic.twitter.com/IK4QRmRV9s

Augustus said her hiring is part of the "defund the police" movement. In a social media post after she joined the Hyattsville Police Department, Augustus wrote, "Defunding the police means shifting funding from a focus of routine law enforcement to a plan that includes funding for community support that works in tandem with good policing."

When asked if she agreed with the philosophy behind "defund the police" Chief Awad said she welcomes the refocusing of police priorities.

"I don’t think there’s a benefit to saying 'defund the police,'" Awad said. "I do believe we could allocate resources to help us help the community, particularly where mental or behavioral health incidents or crises are concerned."

Credit: Amal Awad
Chief Awad as a recruit at the PGPD Police Academy

Awad is the first female, African American and gay police chief to permanently hold the job in Anne Arundel County.

"I fully recognize that I wear a uniform my mother did not have the opportunity in her lifetime, had she chosen this profession, to wear," she said. "I don’t take my position lightly."

"June was a tough month for me and a lot of people who look like me," Augustus said. "I think a lot of us were reminded that we are 'African' Americans. But through all of the tragedy that occurred, a lot of people were awakened to the fact that things need to change."

Awad is helping to bring about that change.

"I’m happy to see progressive positive changes come about," Awad said. "Sadly George Floyd lost his life and his family is left to grieve. His name will be memorialized in history for the changes were seeing and about to see. This is huge."

She is a public figure and a department leader, but Awad still has to confront the continued challenges of being a black woman and a mother in the United States.

"I recognize when I walk out the door, I’m not always wearing a uniform," she said. "I’m an African American woman. And I’m concerned, not only for myself, my family, my friends. Everyone."

Despite those concerns, Awad wants her law enforcement colleagues to approach the job with a different attitude.

"I say this to officers frequently. 'Always know your why. Remember your why.' Because it's easy to get into this profession and become kind of disgruntled because you see so many people at their worst. So much negativity," Awad said.  "There are occasions where you do see positive and you do help people. And you do have people come up to you and say, 'Hey. You arrested me. You changed my life. Thank you.'"

RELATED: A look at powerful social justice moments this year