Joe Theissman was at the height of his NFL career with the Washington Redskins. But one infamous play brought it all to a screeching halt. 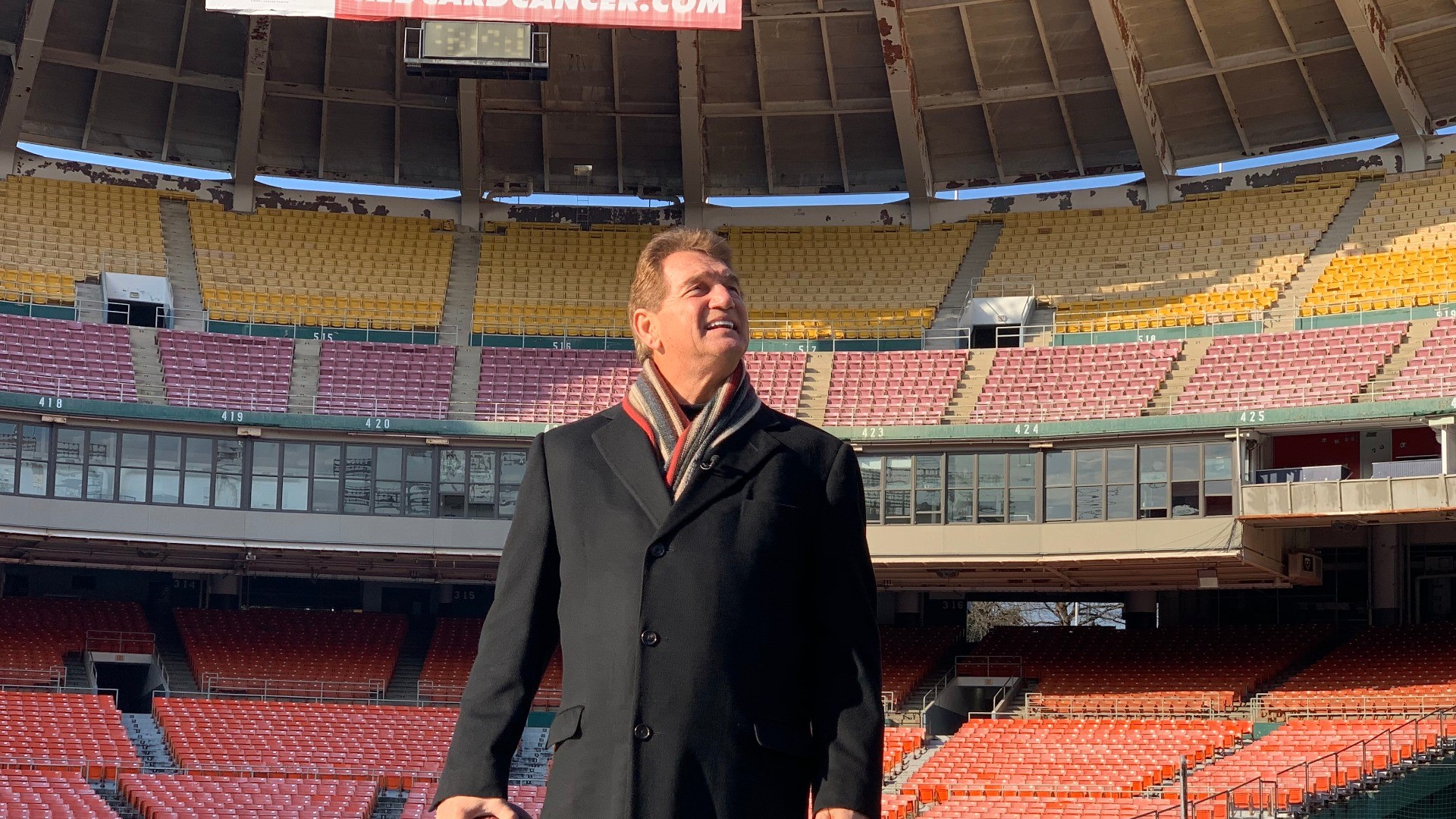 The inside of RFK Stadium has seen better days.

The cavernous building, once filled with adoring fans, is now empty on most days. The field is covered with a tarp for the winter, many of the seats considered unsafe for sitting, and paint peeling from the walls.

Some offices remain open and operational, almost surprisingly full of life and cheery employees, while much of the stadium shows its age.

“She’s an old girl, isn’t she?” Joe Theismann said happily as he walked into the building on a sunny and cold December morning. “What a great place this is. I mean, it’s really special.”

Theismann knows exactly what made this place so special. For years, he took to the field in a Washington Redskins uniform as quarterback.

“It was a special feeling when you walk out on this football field and you feel the energy and you see the familiar faces,” he reminisced.

That is, until one ill-fated play changed everything.

On Nov. 18, 1985, Theismann took the snap and dropped back. The pocket started to collapse and before he knew it, someone grabbed his left shoulder and swung him around.

It was Lawrence Taylor, one of the best linebackers in the history of the National Football League.

“He wouldn’t let go,” Theismann recalled. “Next thing I know, I was on the ground in this unbelievable pain for a very short instance and then, all of a sudden, nothing.”

His leg was severely broken, essentially snapped halfway between his knee and his ankle.

Credit: AP
FILE - In this Nov. 18, 1985, file photo, Washington Redskins quarterback Joe Theismann lies on the ground after he injured his right leg during the first half of an NFL game against the New York Giants at RFK Stadium in Washington. (AP Photo/J. Scott Applewhite, File)

Video from the day shows Taylor frantically gesturing to the sidelines, asking for help.

Theismann was not paying him any attention.

“I could hear everybody, I could feel the moisture on my back, I could hear the sounds of the stadium,” he said. Theismann looked up at the sky and cleared his mind.

“Then off I went. You know, you sort of ride off into the sunset,” he said. “Never believing that it was going to be over. I was positive that I was going to come back.”

Credit: WUSA9
Joe Theismann is carried out on a stretcher in this WUSA9 file photo from November 18, 1985.

But that never happened. After months of rehabilitation, he scheduled a workout with the Redskins.

Twenty minutes into it, he looked up and saw everyone that had been watching him had gone inside.

“That’s when the reality of what had happened to me really hit me,” he said. “When the Redskins released me and I wasn’t Joe Theismann, Washington Redskins football player anymore, I was a guy that had played the game of football and it was gone.”

In that moment, Theismann realized he would have to change.

“People would say that it was a tragedy that happened in my life, but it really wasn’t. It was a blessing,” he said. “I’d become somewhat of a self-absorbed individual and didn’t really care much about a lot of things except myself.”

He decided it was time to turn over a new leaf.

He became a full-time television broadcaster, calling football games and doing commentary. He eventually became a motivational speaker and actor and has a restaurant in his name in Alexandria.

He still sees Lawrence Taylor sometimes. The two have been friends and golf buddies for years.

Theismann said Taylor once told him the lesson he took away from the infamous play.

“He said, ‘Joe, I learned a great lesson that night. No matter how great you are at what you do, it can be over in an instant,’” Theismann recounted. “And that’s why every day you have to live your life to the fullest, every day you have to go after it with everything that you have, because there are no guarantees for tomorrow.”

Episode two looks at the moment Air Florida Flight 90 crashed into the Potomac River in 1982.