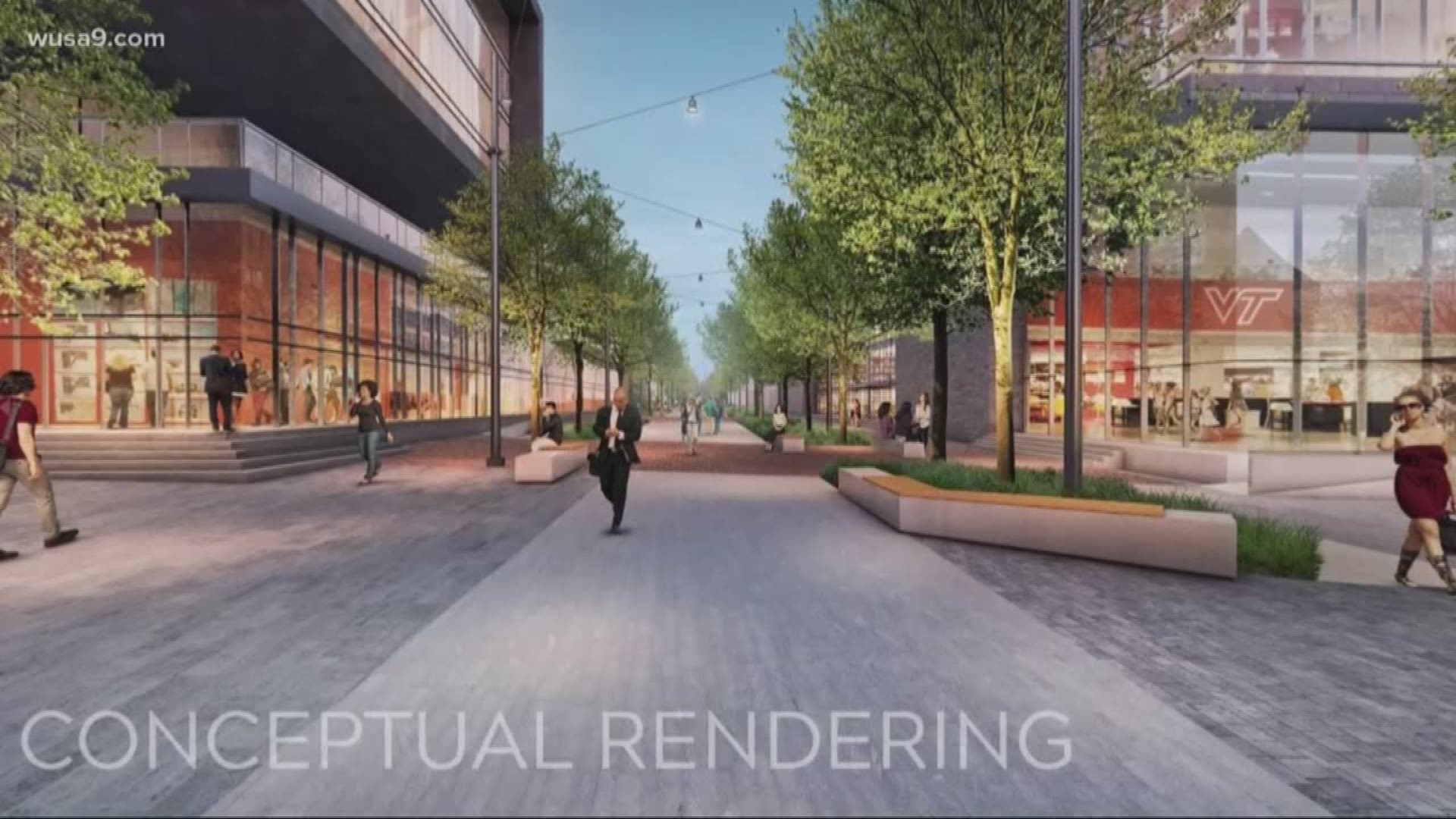 The graduate campus will be a part of a 65-acre mixed-use district that includes the Potomac Yard shopping Center, which will close, said Alexandria Mayor Justin Wilson. He said the shopping center was always considered a "temporary" development.

"We'd always assumed that that area was going to be redeveloped. That was where we intended to finance the Metro station using density in North Potomac Yard," said Wilson. But retail will return to the development, not in the current big box stores, (Target, Staples) but in smaller, more dense, urban-style formats, said Wilson.

The new campus will be close to the future Potomac Yard metro stop.

Virginia Tech Innovation Campus director Brandy Salmon said students will start to enroll for fall of 2020. While the campus is being built, students will take classes out of what is now a big box store, adjacent to where the new buildings will be.

The campus will be located south of the Four Mile Run stream that separates Alexandria and Arlington. School officials said they hope it will position Virginia Tech and future partners well by being close to Washington D.C., diverse industry and the new Amazon HQ2 project.

The new campus is part of a "tech-talent pipeline package" crated by the Virginia Economic Development partnership and approved by the general Assembly to attract Amazon to build their HQ2 in NoVa.

Senator Mark Warner, a technology entrepreneur said, "This is deeply personal to me...the one thing I think we've always lacked in Northern Virginia...we have not had the world-class research facility that the Innovation Campus will produce."

President Tim Sands said that location is the ideal to support Virginia Tech’s plan to develop new tech talent and  disciplines. "We have the right people, the right time, and this is certainly the right place."

The new campus will have classrooms, incubator space for startups and research and development, as well as offices for industry collaborations and gathering space for alumni events. School officials said they are also planning for public open space and ground floor retail.

The new Metro stop planned for the Yellow and Blue lines will be about a quarter of a mile from the campus. That stop - the Potomac Yard stop - was originally slated to have two entrances but now likely will only be one, after a memo went out in May saying it would not be fiscally responsible to have two.

Virginia Tech plans to have about 750 master's candidates and hundreds of doctoral and post doctoral students on the campus when it is complete in about 10 years.

“Alexandria’s future has never been brighter,” said Mayor Wilson.  “We are excited to deepen our partnership with Virginia Tech to bring to life a vibrant mixed-use district envisioned by our community through our local planning processes. The Innovation Campus will fuel Alexandria’s economic growth goals by attracting industry partners and driving business start-ups, and will complement the many tech-focused agencies and companies that already call our city and Northern Virginia home.”

Originally, Virginia Tech had planned the Innovation Campus to be located slightly further away from the location announced Monday; in November, the school announced plans to build at Oakville Triangle, about a half a mile further from Amazon's planned HQ2.

Virginia Tech officials said the new campus will triple the university's footprint in Northern Virginia, where about 60,000 alumni live, according to a release.