No restaurants lost stars this year, nor were any restaurants previously on the list awarded more stars. 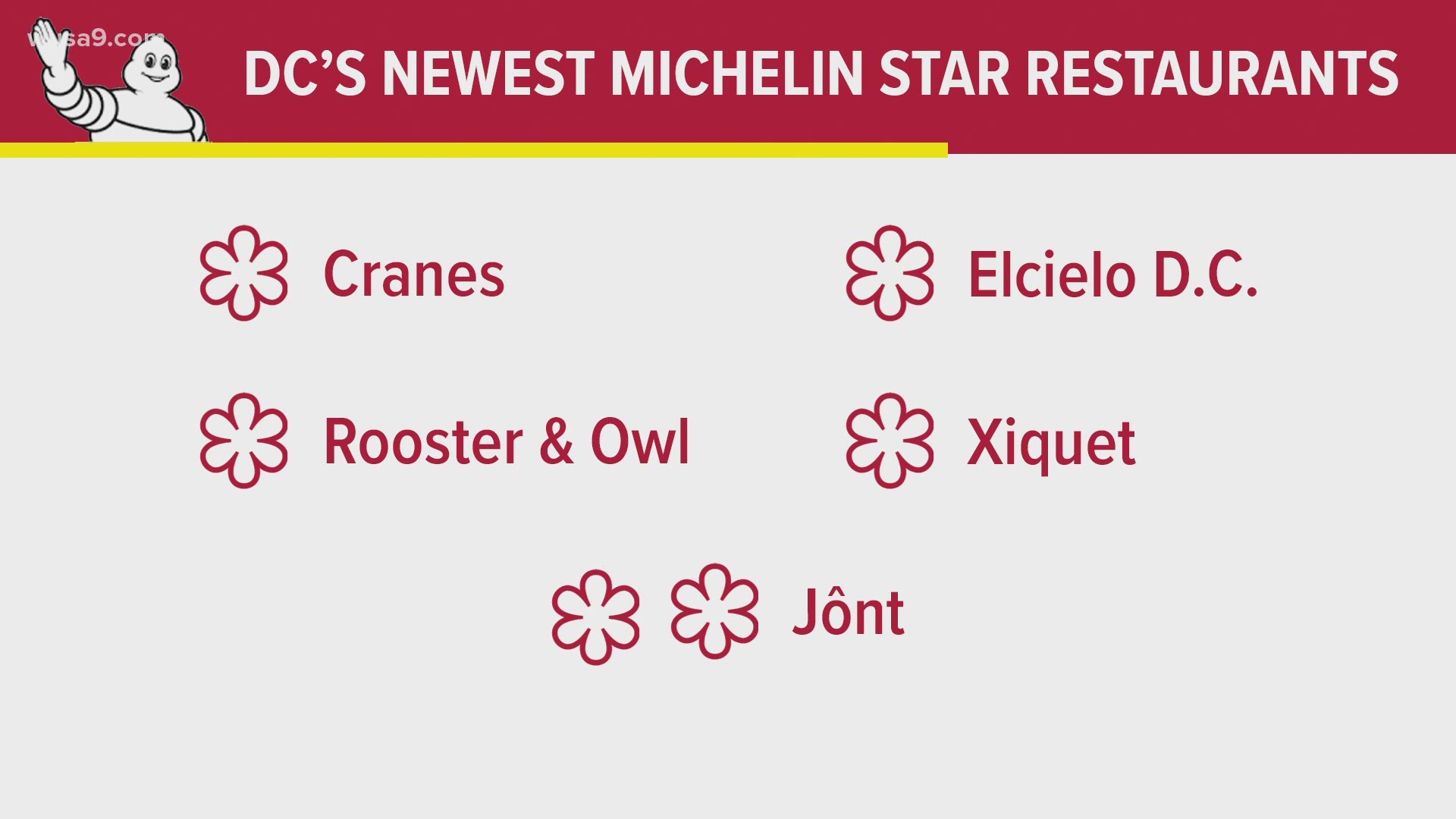 WASHINGTON — It has been 18 months since D.C. foodies last had the experience of waiting to hear what restaurants would be awarded the coveted Michelin stars in the tire company's newest edition of its famous little red book. Stars are typically announced in October, but the 2020 list was delayed 6 months due to the pandemic.

To honor the hardship the restaurant industry continues to weather, Michelin announced a "still serving" theme for its 2021 guides.

“A monumental shift has taken place throughout the restaurant community, requiring everyone to pivot in their own unique way — the Michelin Guide, included,” Gwendal Poullennec, international director of the Michelin Guides, said. “We look forward to highlighting the accomplishments of the industry’s most resilient restaurants, who, despite the toughest year, are still serving.”

Unlike the 2019 announcement, no restaurants lost their stars, nor were any restaurants previously on the list bumped up in terms of their star denotement. In contrast, nine restaurants were removed from Michelin's Bib Gourmand list on Tuesday, while six were added for a total of 41 establishments making the cut.

"When I first dreamed of opening Xiquet, I never imagined what we would be facing almost as soon as that dream came true: just two weeks after we opened, a global pandemic was declared," Chef Lledo said. "This has been a difficult time for our industry. This past year has asked more of our team than I could have ever imagined... but it has also been filled with incredible rewards, including this amazing recognition. We are so grateful for the opportunity, this award has truly been the highlight of my career thus far."

Credit: Courtesy Bresca
Chef Ryan Ratino is now the youngest U.S. chef to be awarded 2 stars for a Michelin concept and to run two Michelin-starred concepts.

Ryan Ratino (Jônt and Bresca) joins Aaron Silverman (Pineapple and Pearls, Rose's Luxury and Little Pearl) and Eric Ziebold (Kinship and Métier) in the club of having more than one D.C. restaurant concept awarded Michelin stars; Ratino, 30, is also the youngest U.S. chef of a 2-star restaurant and the youngest to have two starred concepts on his resume. Inspectors called Jônt  a "showstopper demonstrating brilliance backed by impeccable technique and pristine ingredients."

“I am without words," Ratino, whose nickname is "Michelin star" because of his lifelong love for the little red book, said. "This past year has been incredibly challenging for everyone, particularly our industry. So being recognized by the Michelin Guide for two of our concepts – in the middle of a pandemic - makes me incredibly humble and grateful to have an amazing team of hardworking and talented individuals behind me.  This is a recognition to their passion, their dedication, and their love for hospitality. I couldn’t have asked for a better team – my family – to embark on this exciting journey.”

In another first for the Guide, a Colombian restaurant --Elcielo D.C. -- was given a starred rating for the first time ever.

“My team and I am very humbled and honored to become the first Colombian restaurant to appear on the Michelin guide,” Barrientos said. “This is a huge accomplishment for Colombian cuisine. I am proud to have Colombia represented and recognized as world-class gastronomy and I hope this is only the beginning to show how our Colombian and Latin American heritage transcended borders.”

You can see all the newcomers' reactions to receiving stars here.

The Inn at Little Washington remains the region's only 3-star restaurant, as well as the only concept located outside the District.

The Inn at Little Washington