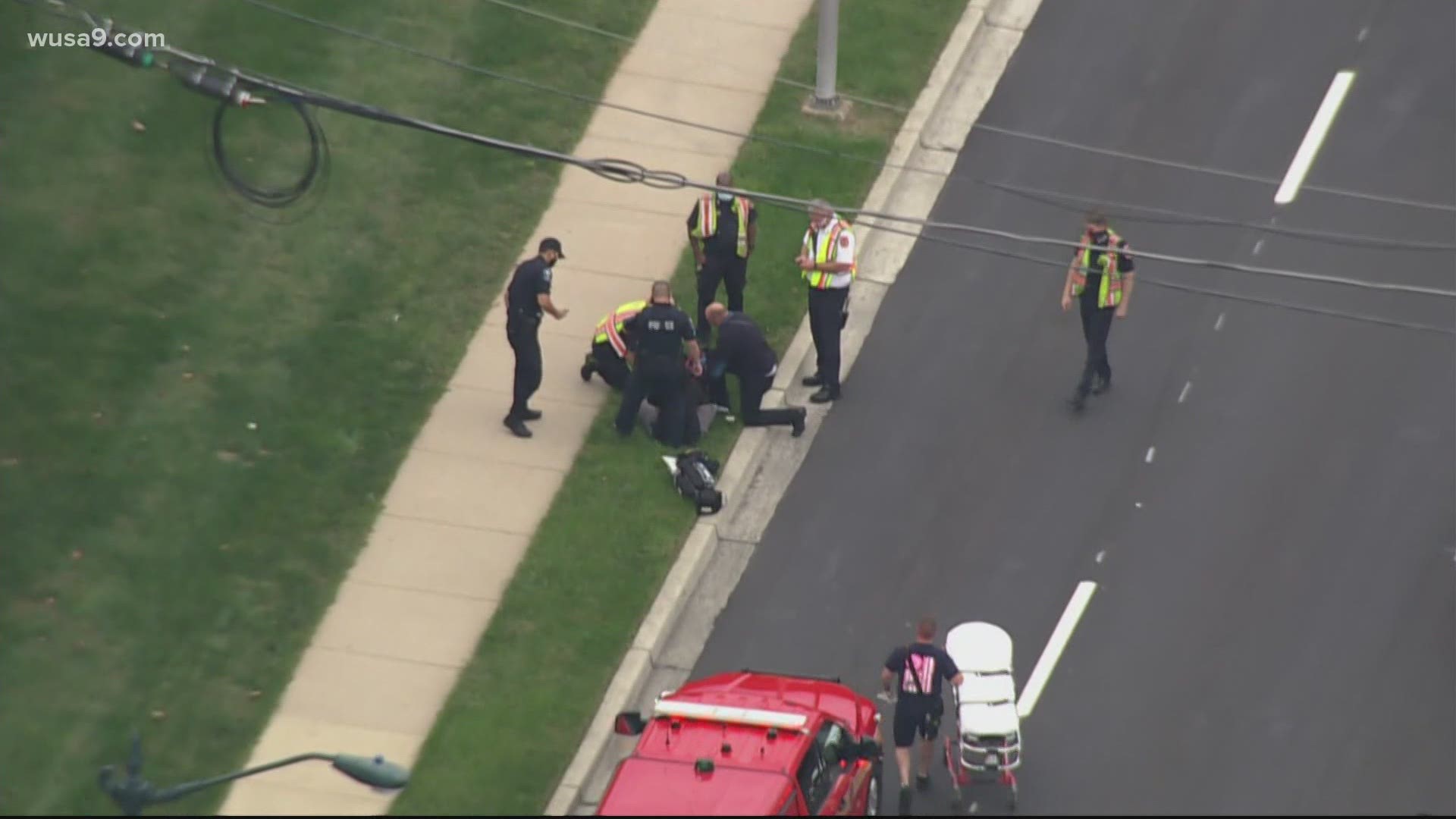 ROCKVILLE, Md. — A coyote was shot and killed by Rockville City Police after multiple attacks in Rockville Thursday. The Maryland Department of Health said the coyote tested positive for rabies.

“Due to the aggressiveness of this animal, and the fact that three individuals were severely attacked, one being a child, we made the decision to put the coyote down out of an abundance of caution,” Rockville City Police Chief Victor Brito said. “Our utmost concern will always be the safety of the community and its residents.”

A stay-inside order was issued for several hours Thursday afternoon as Montgomery County authorities asked that those who live in Woodley Gardens, College Gardens and King Farm be extra vigilant, particularly when outside with small children or animals.

Three separate animal attacks occurred Thursday in the Rockville area, and multiple coyote sightings were reported, according to the police. A 59-year-old woman walking her dog, a 12-year-old boy walking with a friend and a 39-year-old woman were all treated for non-life-threatening animal bites at local hospitals.

Anyone who spots a coyote should calmly and slowly leave the scene and call 911. Do not try to outrun a coyote.

ALERT: Residents in Woodley Gardens, College Gardens and King Farm are advised to stay inside and/or be vigilant & aware of animal (coyote) in area that may be dangerous https://t.co/zn8bkfcOop pic.twitter.com/sea7D5RXsO

The first attack occurred on Winder Court off Manakkee Street around 10 a.m. A 59-year-old woman was walking her small dog when they were attacked. She was taken to the hospital to be treated for bites and lacerations on her arms, while her dog was quarantined for a bite on its leg. She has since been treated and released, but her dog remains in quarantine as a precaution.

Prior to the attack, two other dog owners had reported coyote sightings. Around 5:30 a.m. a man walking his dog near Princeton Place said he saw a coyote being aggressive, but he raised his arms and made loud noises and the coyote ran away. At 11 a.m., a homeowner on Aster Boulevard said their dog was barking at a coyote outside. The dog was taken to the vet, but was not injured.

The second attack happened around 3:30 p.m. along the Upper Watts Branch Trail at Nelson Street and College Parkway.  A 12-year-old boy and his friend were walking on the trail, when the pre-teen was attacked. He was transported to Children's National Medical Hospital for serious bites and laceration to both legs. He has been released.

The third attack was less than an hour later on Redland Boulevard near Reserve Champion Drive. A 39-year-old woman was bitten on her arm and hand and transported with non-life-threatening injuries to a local hospital. She was treated and released.

Fifteen minutes after the third attack, a Rockville officer spotted the coyote near an underground storm drain along West Gude Drive. The coyote charged at the officer, who shot the animal.

The coyote ran into a heavily wooded area near Aster Boulevard and Carnation Drive. Two officers with the Montgomery County Police Managed Search Operations Team used a thermal imaging camera to find the coyote and humanely put it down.

Montgomery County public health officials would like to talk to anyone who may have had contact with the coyote to discuss the type of contact and any future actions or treatments that may be needed. Please call 240-777-1755 if you think you may have had contact.

Here's what to do if you or a pet is threatened by a coyote:

• Make loud noises, wave your arms or throw things in the direction of the coyote.
• If you are with a dog, put it on a leash or pick it up.
• Back away slowly and carefully. Never run. Running will increase the likelihood of an attack. You cannot outrun a coyote.
• Coyotes show aggression by growling. If the coyote becomes aggressive, throw sticks or clumps of dirt at the ground near the coyote. Avoid throwing at the coyote’s head, as this may intensify the animal’s aggression.
• Be loud and bold.
• De-escalation is the best strategy if an attack looks increasingly possible. If the coyote’s aggression increases, try again to back away slowly.
• Call 911 to report the incident. 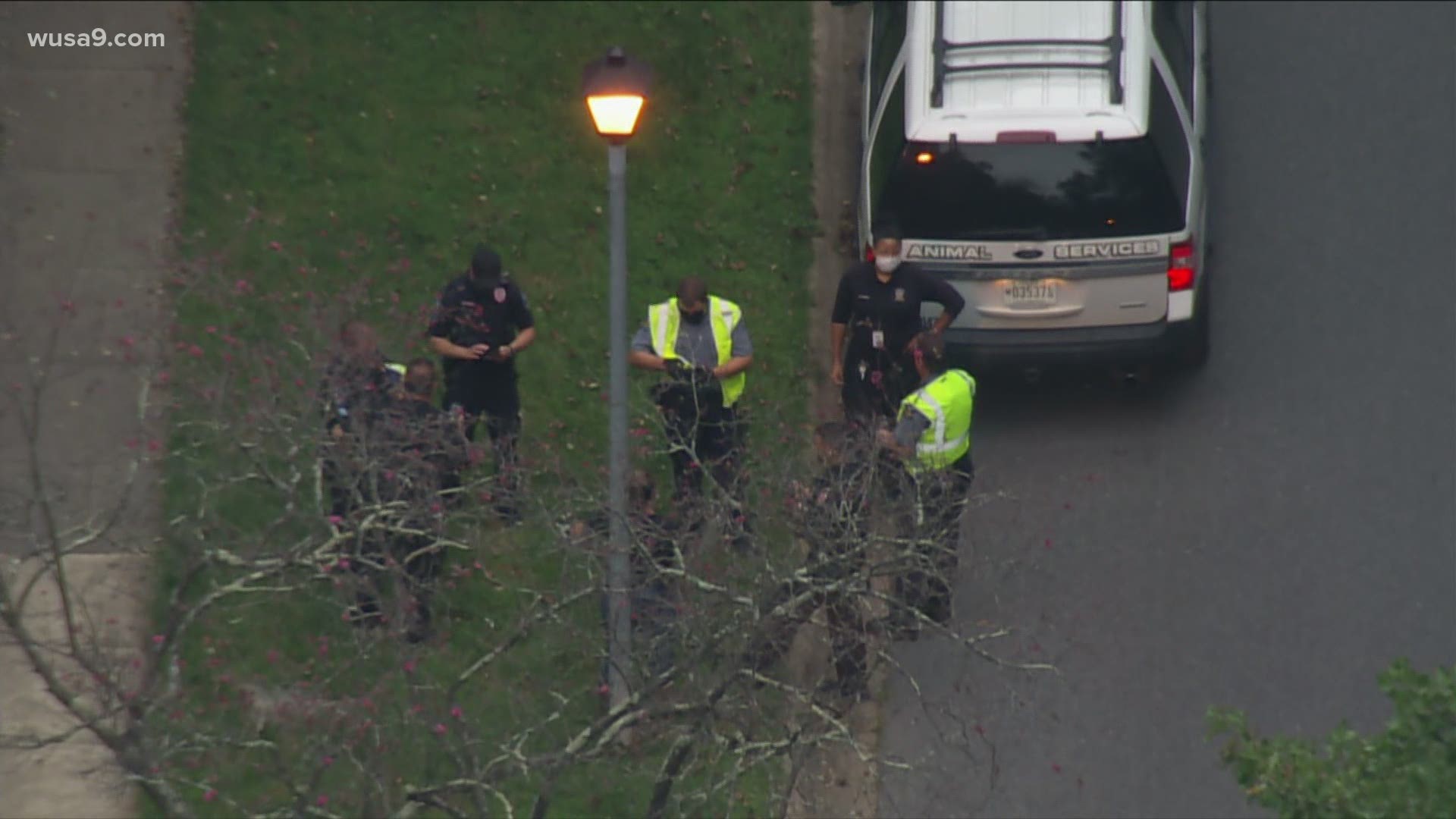