Dating and mating: How babies are made at the National Zoo

Love is in the air, as zookeepers prepare several species for breeding. Meet the furry couples who could bring new baby animals to the zoo soon. 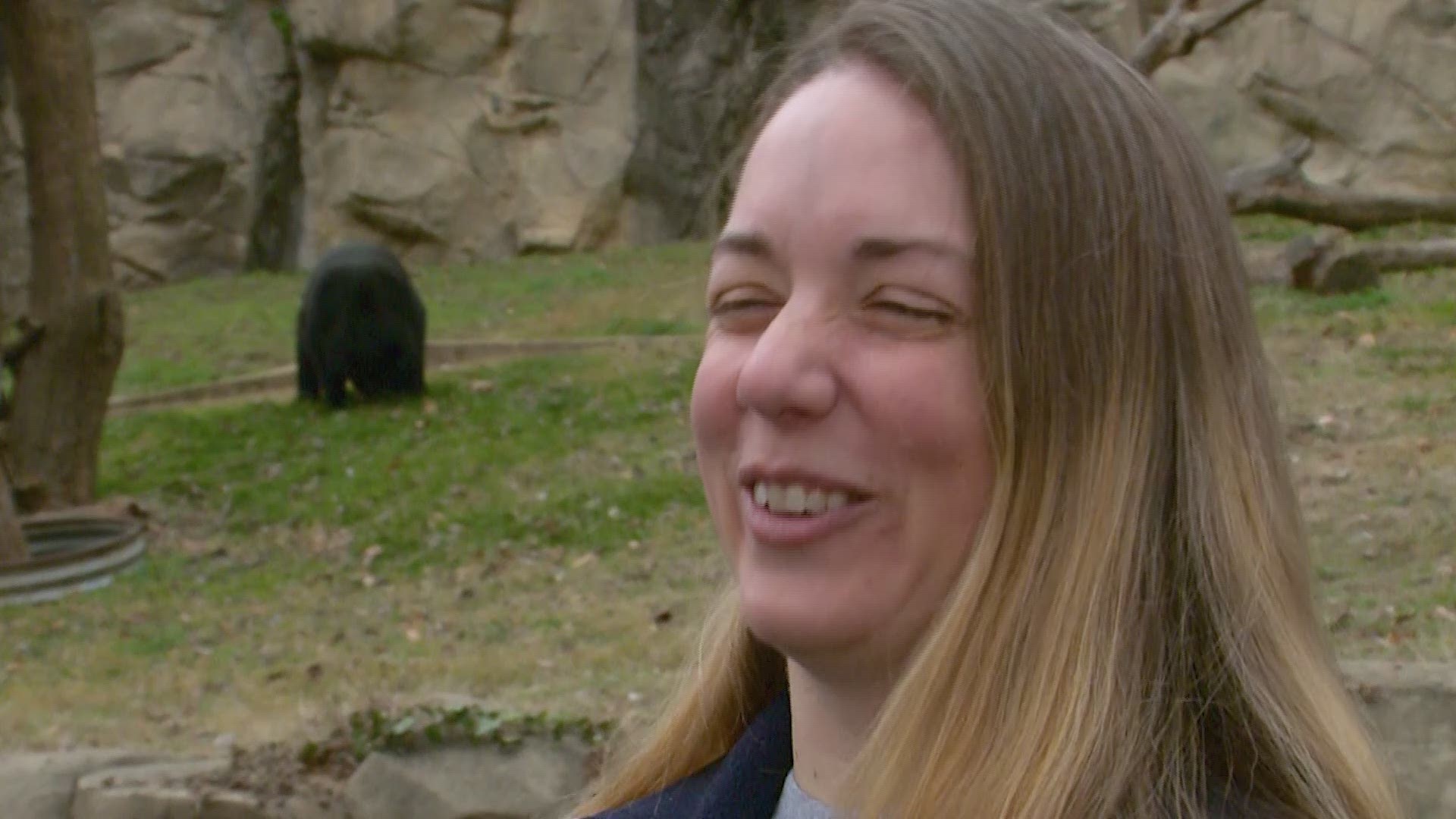 WASHINGTON — A 14-year-old great-grandmother trying to become a mother to her seventh child. A 1.5-year-old female expected to mate with a 33-year-old male who has never reproduced. No, these aren’t headlines in the latest National Enquirer issue -- they are soap operas happening in the Nation’s Capital as we speak. Rather than being considered cause for concern, these blossoming May-December relationships are necessary for survival for several species at the Smithsonian National Zoo.

Washingtonians have a history of being overly interested in the sex lives of some of their more famous, albeit furry and smelly, residents. Poor Mei Xiang can’t pack on 10 pounds without the entire city putting her on pregnancy watch. And during the city's longest-ever government shutdown, one of the most frequent questions the zoo got was when the animal cams would be back online. Now, two more potential mamas will have to tackle their time in the spotlight as Billie Jean the bear and Athena the sloth prepare for breeding.

Credit: Courtesy National Zoo
A baby sloth has not been born at the zoo since 1984.

Athena, a 1.5-year-old Southern Two-Toed Sloth, is the zoo’s newest resident, having been sent from Ellen Trout Zoo in Texas as the result of a breeding recommendation. Like many of the animals at the zoo, Athena and her mate, 33-year-old Vlad, are part of a Species Survival Plan (SSP), a program developed in 1981 by the American Association of Zoos and Aquariums to foster captive breeding and protect species designated as threatened or endangered in the wild. Currently, 53 of the 390 species represented at the zoo have breeding recommendations.

RELATED: Prediction: Athena the sloth will be the National Zoo's new Bei Bei

More than 23% of mammals are listed as "threatened" by the IUCN-World Conservation Union. Under the Endangered Species Act, the U.S. Fish and Wildlife Service included captive breeding as a management tactic to work towards the delisting of endangered species.

While two-toed sloths are currently a stable population in the wild, zookeepers warn that due to climate change, many species who once had a healthy population are losing numbers drastically from habitat loss.

"Given the current state of climate change, it is important to preserve all species, even if they are currently considered 'least concern' by the IUCN," small mammal house zookeeper Ann Gutowski said. "By breeding two-toed sloths under human care, we are creating a backup population, in case the number of wild animals drops in their native areas."

Under the SSP, genetics are always the first factor in breeding recommendations, to guard against accidental inbreeding and promote healthy variety within a population. Athena and Vlad were actually matched together out of sheer availability.

"We’d basically put together anyone that was able to breed at this point," Gutowski said.

Gutowski noted that ideally, she’d place more female sloths in the enclosure with Vlad, who has never procreated, to give the old Romeo his best shot at one female taking a liking to him, but the sloth population just doesn’t support that wish right now.

"There actually aren’t that many sloths in captivity, so we literally had to wait until Athena was born until we could bring her here to breed with Vlad," Gutowski said. "We brought her here as soon as she was old enough to separate from mom, and be independent so that hopefully they’ll warm up to each other and make a baby for us."

Athena has not yet reached sexual maturity, and will not be ready to reproduce until around three years of age, so she and Vlad have some time to get to know one another.

"Right now, they’re just living together, getting to know each other a little bit, and then hopefully in a few years, we’ll be looking at having a baby sloth," Gutowski said.

But lest you worry this young lady is being forced into an unhappy arranged marriage, it turns out the procreation powers all lie in her hooked claws.

"Females tend to be very picky," Gutowski said. "They decide whoever they want to breed with. We just try to get them together as much as possible so that hopefully she’ll warm up to him."

A baby sloth has not been born at the zoo since 1984. Vlad’s previous roommate, 46-year-old Ms. Chips, never quite took to him and the pair simply co-habitated without reproducing, until Ms. Chips passed away. Though keepers can’t say with 100% certainty that the duo never copulated since sloths tend to sleep for 20-22 hours a day and most breeding activity occurs when keepers aren’t around, offspring were never produced.

So far, keepers see no warning signs that Athena and Vlad won’t be a good match. When first introduced, Athena and Vlad curiously sniffed at one another, and then promptly ignored each other, which surprisingly, is exactly what the zoo wanted to see.

"Sloths are a solitary species in the wild, for the most part, so they weren’t going to go snuggling together," Gutowski said. "As long as they are fine eating from the same bowl and they aren’t fighting, that means they are getting along."

Credit: Courtesy National Zoo
Billie Jean is the matriarch of the North American population of Andean Bears and just became a great-grandmother.

The zoo’s other romantic pair started off on a much rockier note. Like Athena, six-year-old Quito the Andean Bear moved to D.C. when he was identified as a good breeding match for 14-year-old Billie Jean, as his genes were not represented in North America.

But when Quito first came to D.C. from Zoo Duisburg in Germany in 2017, Billie Jean was less than impressed with her match made in gene heaven.

"She was very aggressive with him, and really put him through the ringer to see if he could handle her," Colandrea said. "She would pin him in the corner, swat at him and he would just take it."

RELATED: Wise: Washington's most popular, non-partisan mammal is off to Beijing -- can humanity survive?

Over time, Billie Jean decided Quito passed the test, and the pair have mated numerous times. Billie Jean even became pregnant by Quito last October. Sadly, the pregnancy was not viable and Billie Jean’s body reabsorbed the fetus, the equivalent to a human miscarriage. But the conception itself was a huge success for keepers to know that the pair could ultimately conceive together.

Billie Jean, who is the matriarch of the North American population of Andean Bears and just became a great-grandmother, has birthed three sets of twin cubs, last giving birth in 2014. Quito has not yet reproduced.

Colandrea said though some Andean Bears will tolerate a male in their space, Billie Jean, who she describes as "very independent," will not, and thus the pair are not kept together outside of breeding periods. The keepers must instead look for Billie Jean’s cues that she’s in heat.

Quito, on the other hand, is always ready to breed, and Colandrea said as soon as he sees her out in her side of the yard, he starts trilling, which is his solicitation call to get her attention.

"Quito is the sweetest male bear I could ask for," Colandrea said. "He’s twice [Billie Jean’s] size so he could easily push his luck and do what he wants, but he always lets her rule the roost. When they are playing, he will sit down so he’s her height. He just always wants to see her." 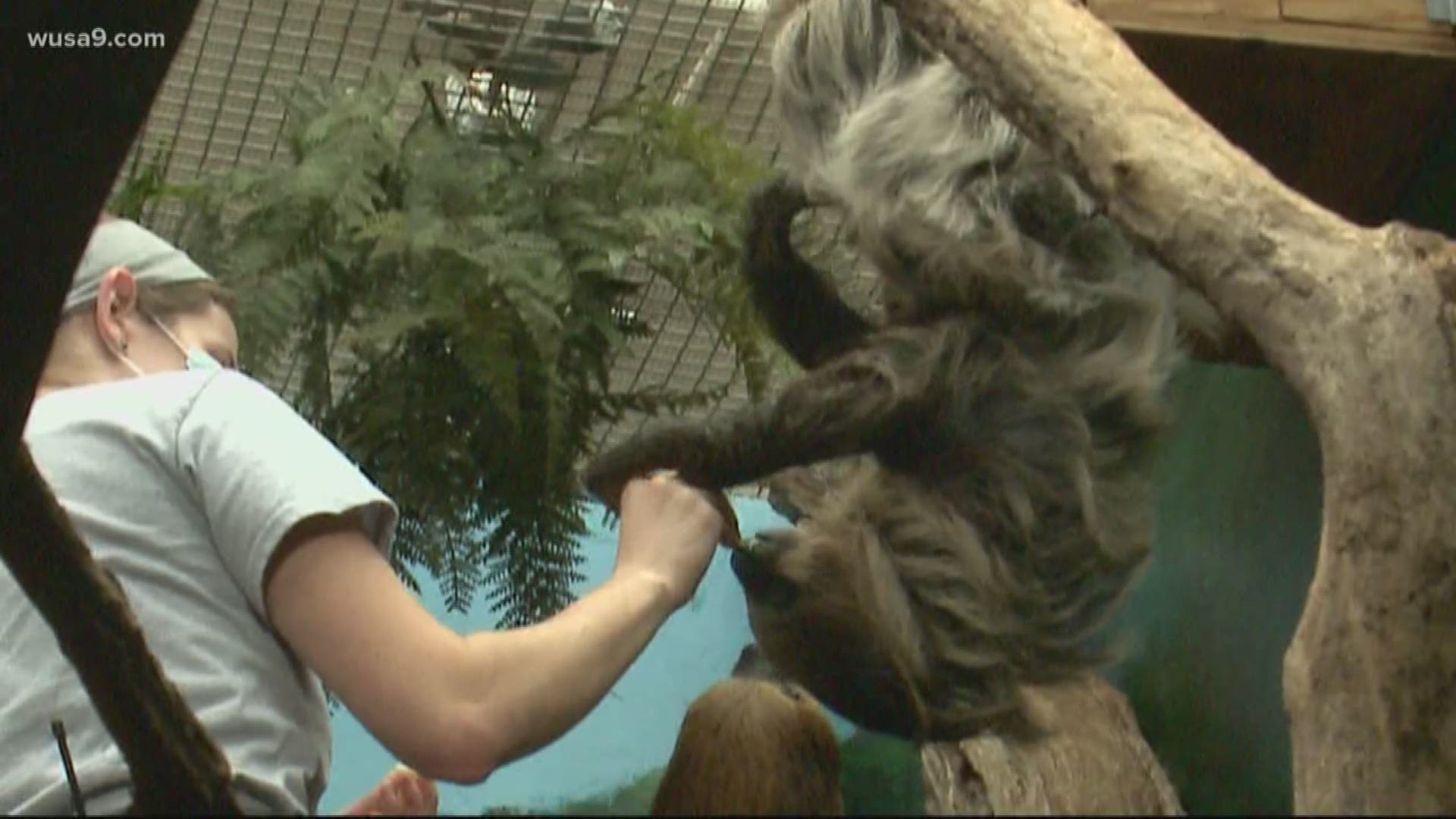 Here’s hoping that these two spitfire moms-to-be and their laid-back, wannabe baby daddies can turn their breeding recommendations into true romantic connections, because who wouldn’t be rooting for baby sloths and baby bears to be in the National Zoo’s future?

Sloths and bears and breeding... oh my!