Meet the Washington Justice: The professional Overwatch team trying to put DC on the esports map

WASHINGTON — On Saturday, six 20-somethings living in D.C. will sit down in front of their computers, log on to a video game and compete against opponents hundreds of miles away. People around the world will be doing the same thing, only, these six are getting paid to play – and they’ll have an audience watching them do it.

D.C.’s new esports team, the Washington Justice, started their first homestand on Saturday at The Anthem. The Justice’s roster includes some of the best Overwatch players in the world, and they don’t just play for fun – thousands of dollars are on the line.

It’s the Overwatch League that has sparked interest across the nation and world. Professional video gaming, or esports, at its finest. This is where the geek becomes chic and video games go from mom’s basement to the grand stage.

But first, a quick primer: "esports" refers to any number of video games played in competitive circuits – games like the popular Fortnite, Call of Duty and Overwatch.

In Overwatch, two teams of six players each face off against one another, with objectives ranging from capturing designated areas to "pushing" a cart from point A to point B to simply eliminating all of the other team's players.

Games like Overwatch have become big business, with hundreds of thousands of people watching online streams of matches, and many colleges and universities now forming esports teams.

Washington was put on the esports map last year with the formation of the Justice. While the team represented D.C., it had to play its inaugural season in Los Angeles due to its position as an expansion team.

In L.A., the Justice lived together in a home and played its matches at a production studio. Now, the team still lives together, but things feel a little homier for a team that represents D.C.

The Justice also just built a new facility at an office building across the Potomac River in Arlington, which includes meeting spaces, a practice facility and offices for team management.

The management and team members consist of new faces this season, with a shake-up by team owner Mark Ein. He also is the owner of the Washington Kastles, a professional tennis team in D.C.

The team this year is led by one of the Overwatch League's best players, Corey Nigra. The full roster consists of:

Of these eight players, only Nigra, Yankel and Hong return from last year's squad.

"I wake up every day, having fun, with the job I'd like to do. It's definitely really cool. I'm really blessed to be in the position that I'm in, said Yankel. "

In a 2020 season outlook put out by the Overwatch League, it says the Justice could be "a force" in the league if it can lock down its play at the support and tank roles on the team. Nigra and Yankel both play DPS.

Currently, Washington sits in sixth place in the Overwatch League. The league has 20 teams – 10 from the United States and 10 from other countries, including England, South Korea, Canada, France and China. 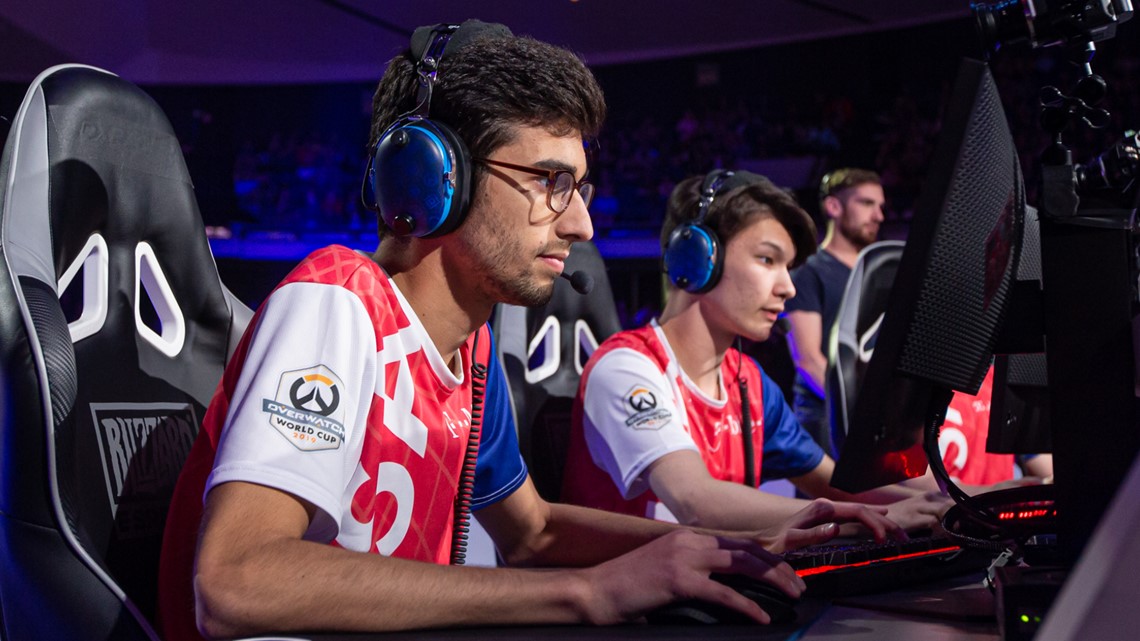 The Washington Justice hopes to capitalize on the popularity of online gaming and esports, which has grown so much in the last decade.

According to WePC, the video games market will be worth over $90 billion in 2020, a more than $20 billion increase from 2017. The tech company also is reporting that across the world, there are more than 2.5 billion video gamers.

WePC's data also shows that the Asia Pacific region of the world spends the most on gaming, which would make sense.

Countries like South Korea, Japan and China, all have very developed gaming leagues and are arguably ahead of the United States in competitive esports gaming. The Justice themselves have four players that come from South Korea. Only two players on Washington's team are from the U.S.

Below, meet the Washington Justice coaches:

Through Twitch, YouTube and other streaming services, the game Overwatch is continuing to impact a growing esports industry.

Hundreds of thousands of people tune in weekly to watch these digital gladiators battle it out in a virtual arena. A virtual arena that can span multiple continents, but still creates a game-viewing experience that rivals a baseball, basketball or football game. It's been doing so with tournaments that have been held across the country, and world, since the Overwatch League debuted in 2016.

"We want to hear the stadium shake because of the support," Jian Qing said.

How are these players considered athletes?

It’s all in the competition. The high level of competition in video games has increased a hundredfold since the birth of the Internet. You are no longer just playing locally with you and three of your friends in Goldeneye or Call of Duty. You are playing globally against players from halfway around the world.

In technical terms, one way to measure esports "athleticism" is a metric called APM, or actions per minute. A normal person or beginning gamer has an average of 50 APM. Professional gamers can hit the 400 to 600 APM mark. Korean StarCraft player Park Sung-Joon of Korea has achieved a record APM of 818.

Your APM is determined by the number of keystrokes, mouse clicks and other combinations of commands you can make in a minute. An APM of 600 means a professional gamer can make 10 such actions in a second.

"Everyone spends hours and hours in the game perfecting their craft," said Corey Nigra, who has found that being one of the best in your sport can be hard and is working even harder outside of team matches to continue the success he's seen since being in the Overwatch League.

So why is esports catching on across the world, with more and more people each year?

Everyone is getting into esports and that includes not only the collegiate level people but also older generations.

The ages and physiques of the players are young. And while it is a young person league, esports are starting to transcend multiple generations, with gamers from the 90s and early 2000s hitting middle age.

“Unlike traditional sports, you can hop into the game Overwatch and play with anyone around the world. And if you are good enough, you will play with the top players in the world. I would recommend staying in school,” said Christopher “Bani” Benell, individual coach.

Benell was a professional player in the Overwatch League himself last year, before coming to Washington as a coach.

While the "staying in school" part may have been mentioned in jest, it's not out of bounds, because the average age of his players is so young. The oldest, Corey, is 21-years-old. Benell, who is young himself at the age of 27, knows that young teens are investing large amounts of time into these games – though not everybody is getting the same financial return as the players who are making good money in the Overwatch League.

Players in the Overwatch League make on average $114,000 for the season, with a base salary equaling around $50,000. Many are being recognized as the best at their sport before they're old enough to vote, drink or attend college. 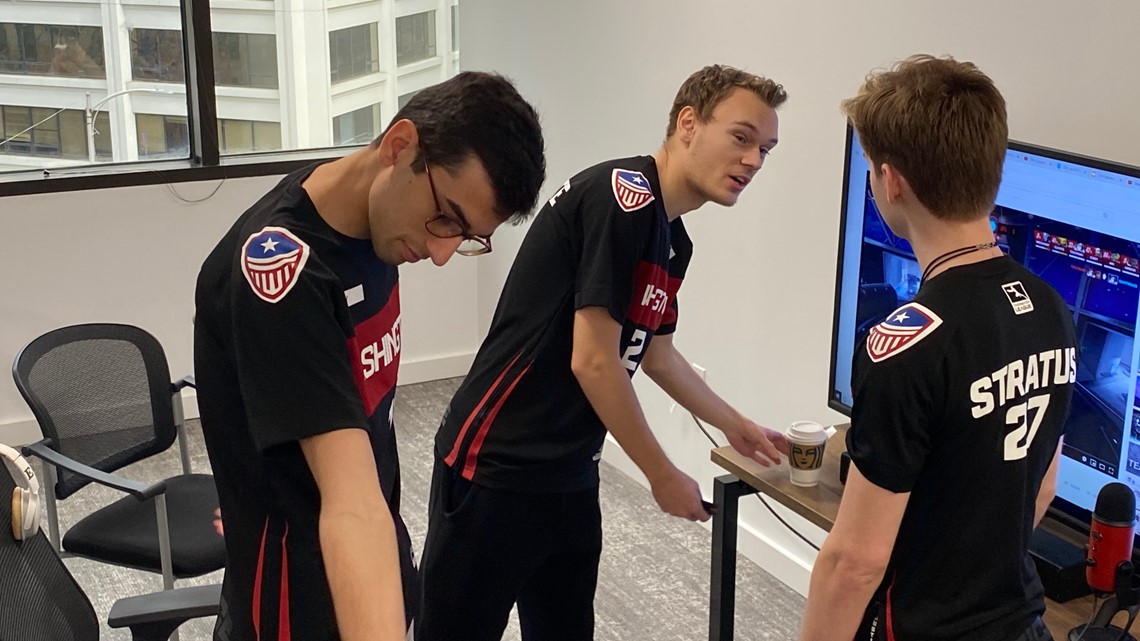 Just like the city it represents, the Washington Justice is culturally diverse, with two Americans and two Swedes on the team, along with the four South Korean players. At the moment, the whole roster is male. Women do hold roles in both coaching and management this season.

And while this team and league are young, they're hoping their passion for the game and, for some of them, their drive to come to America, will resonate with fans in the nation's capital.

These players know that they have to prove themselves week in and week out, and like many sports-oriented jobs, have to keep a professional, sponsor-friendly appearance. This includes posting on social media and attending events across the DMV, which may consist of anything from an appearance at a fitness class to promote the team or attending Washington Wizards games to gain a sense of feel for the city's sports fans.

But at its core, these players and coaches are just a bunch of people getting paid to do what they've wanted to do since they were teens: play video games.