New Ways Ministry has provided a haven for the Catholic LGBTQ community in Prince George's County since 1977. The director hopes this step sparks greater change. 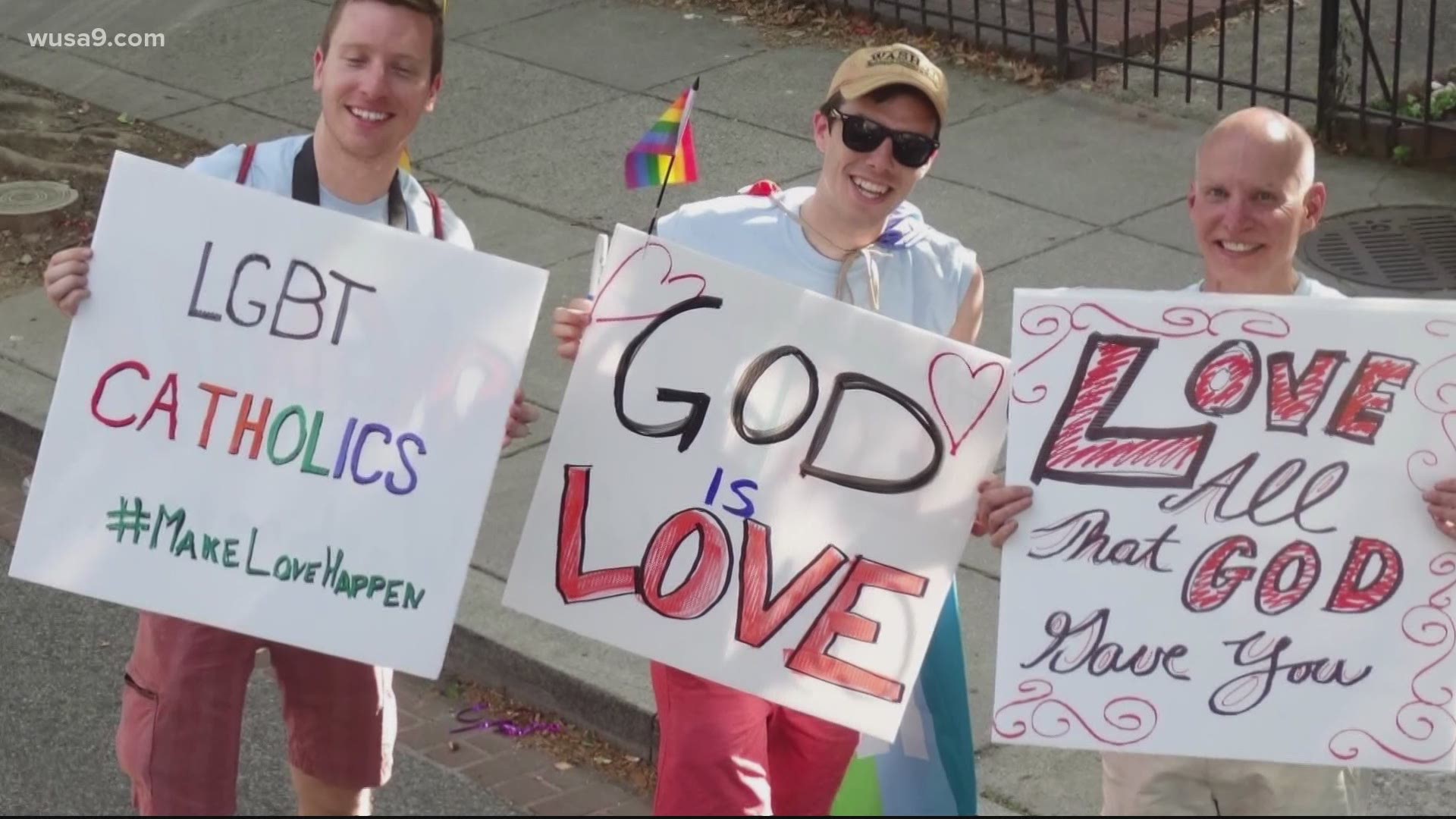 PRINCE GEORGE'S COUNTY, Md. — For the first time in the history of the Catholic Church, the pope has endorsed same-sex civil unions. LGBTQ Catholics in D.C., Maryland, and Virginia call his comments an important step.

Pope Francis' support came to light in a documentary released Wednesday in Rome, as first reported by the Catholic News Agency.

“It’s a historic day for the Catholic Church and for the LGBTQ community, because no pope has ever said anything that positive about lesbian and gay relationships before," Executive Director of New Ways Ministry, Francis DeBarnardo said. "We’ve had so many decades of antagonism from papal statements.”

New Ways Ministry was founded in Prince George's County in 1977 as a haven for LGBTQ Catholics. DeBernardo said they promote dialogue, education, understanding and advocacy for justice in the Church and society. He's served as the executive director since 1994.

“I do hope that he will go further, further than just endorsing civil unions, but I do still see this as a good step," he said. "Nothing changes in the Catholic Church overnight. Sometimes it takes centuries."

For the first time EVER, the Catholic @Pontifex has publicly endorsed same-sex civil unions.

On @wusa9 at 11, I speak with @NewWaysMinistry and @DignityDC -- groups that support LGBTQ Catholics -- about what this means for the #LGBTQ community and Church. #PopeFrancis pic.twitter.com/18O0rqrnlQ

Christopher Flow grew up with Catholicism at the center of his life. Now, he serves as the president of Dignity Washington, which is devoted to fostering an inclusive community for LGBTQ Catholics in D.C. He said they celebrate mass every Sunday, host book clubs and bible studies, and engage in advocacy with the local Diocese.

“My Catholic identity was a big part of my growing up, and it was a very conflicting identity, that gay identity and Catholic identity," Flow said. "And I’m hopeful that young LGBTQ Catholics can see these comments as there is a light at the end of the tunnel. There is a way to reconcile your religion and your identity and not feel despair.” 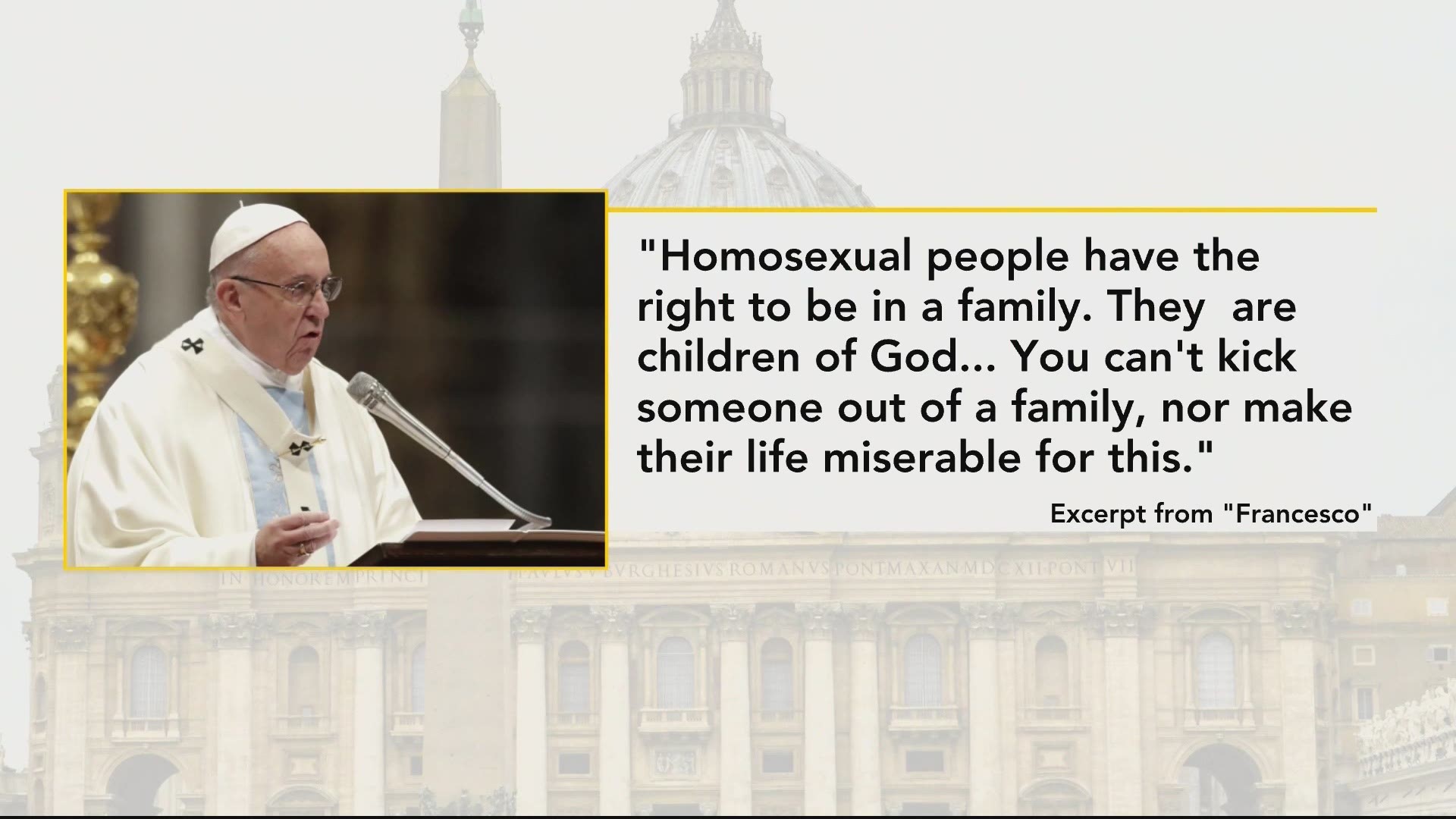 With Dignity Washington, Flow has focused on encouraging young LGBTQ Catholics to embrace both identities -- from PRIDE parades to tying the knot with his own partner last year.

Both Flow and DeBernardo agree that overall, the Catholic body is very inclusive and accepting. They point to the hierarchy as the problem, historically.

“Especially in the United States, the leaders have been very conservative, and quite frankly, very anti-gay," DeBernardo said. "But the Catholic Church is much bigger than its leaders. It’s the people and the pastors, and it's nuns. It’s the school leaders.”

Credit: Christopher Flow
Some men from Dignity Washington hold up signs in support of LGBTQ Catholics.

He and Flow hope Pope Francis takes his endorsement a step further, into Catholic marriage.

“I think that civil unions are a wonderful first step," Flow said. "It’s not changing any catholic doctrine or teaching. The catholic church is still continuing within the doctrine to list LGBTQ individuals as intrinsically disordered along with other terms that are definitely not toward love and inclusivity. That would be something that I would be hopeful that some of these messages and statements also reflect in the church’s teachings, in the same regard as civil unions being reflected into the sacrament of marriage, as that is one of the most holy sacraments that the church can offer."

Flow would also like Pope Francis to announce his support for transgender individuals, who have been targets of violence even in the States recently. He and DeBernardo hope these "important" words persuade other countries that have continued to criminalize and persecute LGBTQ individuals to stop.

“It’s going to be received as a healing balm that will help to cure a lot of wounds that have been inflicted on LGBTQ people," DeBernardo said. 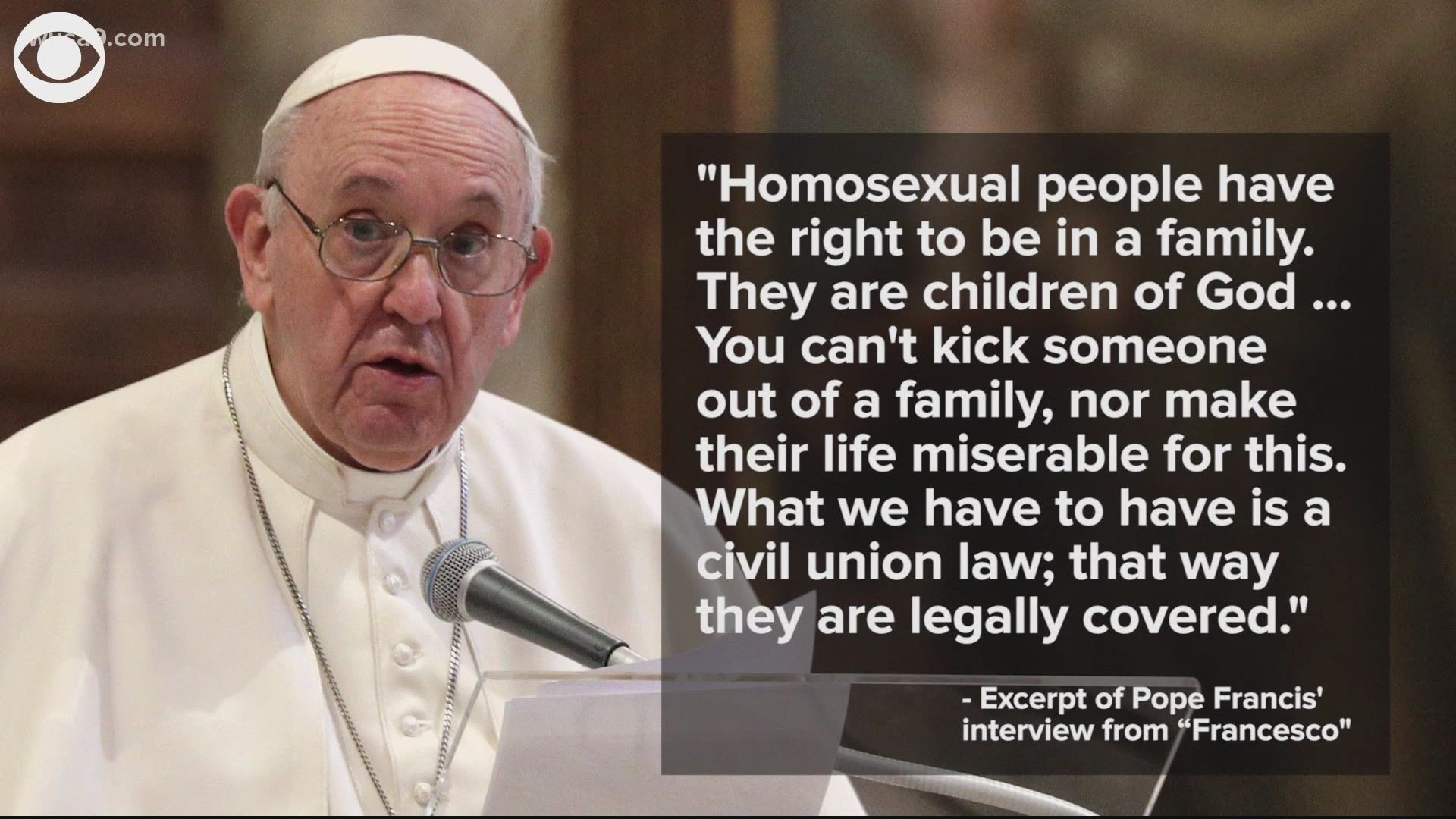