Kids who came to feed DC's homeless bonded over one sad fact: the city is displacing both of them

Washington Metropolitan High School is closing in May. But that didn't stop caring students from bringing hot food to the homeless being forced out of NoMa. 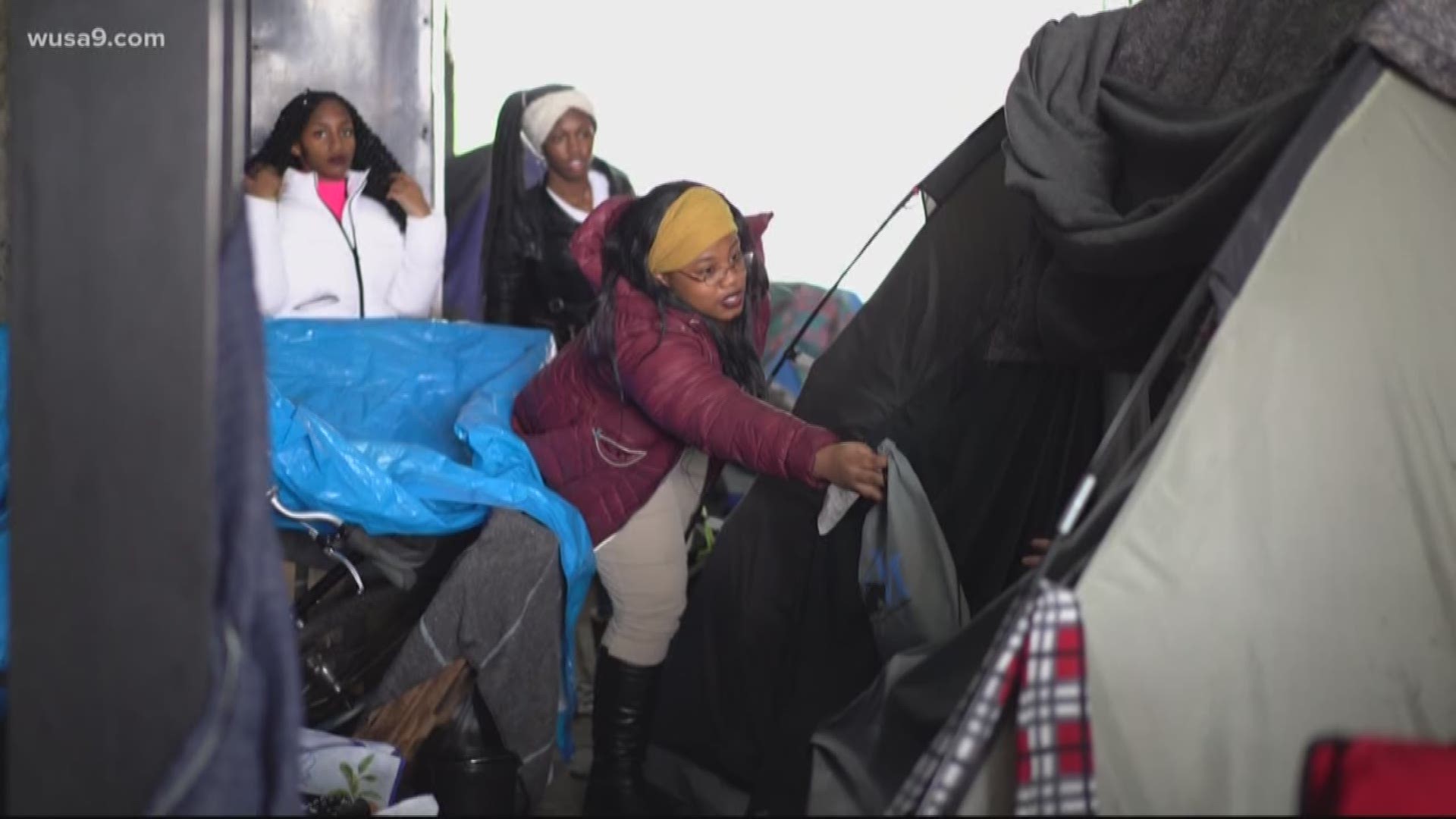 WASHINGTON, D.C., USA — Less than 48 hours and counting. Then their encampment has to go. Or else.

The city has declared the K Street underpass in NoMa a "no-tent zone," which means by 10 a.m. on Thursday, the two or three dozen people who call that sidewalk home will be displaced. If they and the only property to their name -- usually a two-man or six-man nylon tent, replete with donated thermals, bottles of drinking water, snack food and the occasional cooking stove -- are not gone by that time, their belongings will be declared abandoned by the city, taken away and destroyed.

When Lyric Johnson heard that, she and her classmates at Washington Metropolitan High School decided the least they could do was bring the people in those tents a hot meal.

And plead for the District to do more.

"They need our city to come together to try to help them,"Johnson, a 16-year-old senior at Washington Met, said.

It was Johnson's idea to convince her classmates and some of the school's staff to share a meal with those camping in tents under the K,L and M Street underpasses in Northeast.

"I see they shut down a D.C. shelter when we have more homelessness in the city," Johnson said. "People that are in charge see it. So why aren't they helping them? You can at least bring bag lunches. We just want them to try."

RELATED: DC is shutting down a NOMA tent encampment at the K Street underpass

Lyric, her classmates and the staff unloaded a portable table and set up outside the R.E.I. store at M and Second Streets around 1 p.m. Tuesday. The tinfoil came off the giant broiler pans full of chicken, green beans and macaroni with smoked sausage in them. Then they began canvassing each underpass, calling, "Hot food! If you're hungry, we got hot food."

"Where is everybody?" 16-year-old Jasmine said.

But gradually, several people who live on the street unzipped their nylon domiciles, peeked out and smiled.

"See this?" Mike Harris, who has lived on K Street for eight months, said. "This is the good of the good, bad and ugly of this life. The smell of that food and knowing the people bringing it care is just a blessing for all of us."

Harris is very much the underpass's landlord; he owns eight tents, lending out each one to another person without somewhere to sleep.

The cruel irony of these kids doing charitable outreach, is that they can relate to those whom they served. Despite limited resources at the school and no full-time social worker, the city cited poor performance as a reason to shudder Washington Met in May. That means Lyric will be part of its last graduating class, and many of the students who volunteered to feed the homeless today will be educationally displaced by DC Public Schools.

"Sad thing is, some of our kids could end up homeless, or are homeless," Brian Wheeler, who helps with social work at the school and helped organize the outreach, said.

One of  D.C.'s four opportunity academies, Washington Met became a haven for second and third-chance teens that have either been kicked out of other schools or socially promoted without enough academic credit.

Their journey to NoMa from their school on Bryant Street near Howard University is as sad as it is downright inspiring. The kids who go to a school given up on by their city, refuse to give up on the least fortunate in that very same city.

"It makes them feel good," Wheeler said. "They realize what it's like to be in a position where you've been traumatized, where something bad has happened to you. And we know something bad is going to happen to this site on Jan. 16."

It's unclear what will happen to all the people who camp in NoMa after Thursday, when the city garbage and power-wash trucks show up. Harris said he will most likely move to L Street, having had palates for his tent set down after asking the homeless there if he could become their neighbor. And several among his K Street community may follow suit.

But it's even more unclear what happens to the students at Washington Met in May, who also will suffer the indignity of not knowing where they will go next to be educated.

RELATED: 'I want people to see themselves in them' | Photojournalist captures the faces of DC's homeless population

RELATED: Homeless family of 5 given new home and gifts thanks to police in Prince George’s County