From hero to villain and back again, Kobe Bryant took us all on a journey that ended much too soon

From a 19-year-old wunderkind to a creaky kneed veteran who loved being a dad -- and all the good and bad in between -- these are my memories of Mamba. 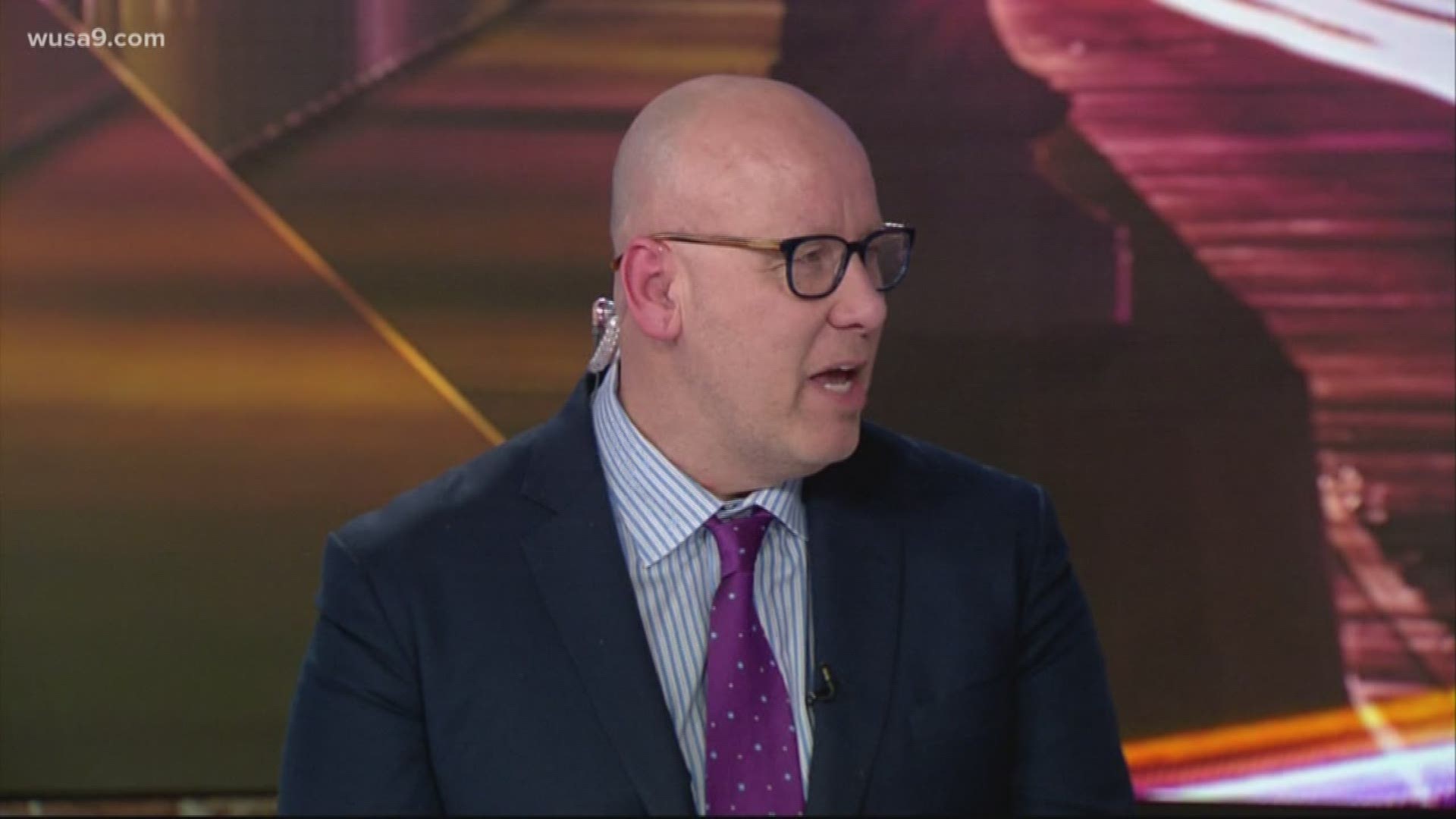 WASHINGTON — I'm not sure what to say, other than I'm really sorry for everyone connected to anyone who went down in that helicopter crash that authorities are saying killed all nine people aboard, including Kobe Bryant and his 13-year-old daughter, Gianna.

We sometimes forget when someone uber-famous dies in a tragedy that there are thousands of other mourners who are personally hurting. There are loved ones who are grieving over someone who was not one of the world's best and most famous basketball players of all time.

Anyhow, the only person I can comment on right now is Kobe.

I knew Kobe. Well, more peripherally than knew-knew Kobe. He kept popping up in my life and career at different times in the most different of ways, pulling me and others along for a thrill-ride in which we really had no idea where he was going and what he would do next.

All we knew for sure was that we were in Kobe's orbit, not our own.

The first time I really met him -- outside of media scrum interviews where everyone asks a question -- was in 1998 at the Lakers' old home, the Forum in Inglewood. I was covering the NBA for the New York Times when I approached him after practice and asked if I could hang out with him for the day for a story I was writing leading up to the All-Star Game in New York.

Kobe had just been named -- and still remains -- the youngest All-Star starter in the game's history at just 19 years old. He was performing levitating acts above the rim at that age no one had seen. He was so cocksure, easily the most confident teenager I had ever written about or met in my life -- and that's including Tiger, LeBron, Kevin Garnett, gold-medal swimmer Summer Sanders and Oscar de la Hoya.

"I'm going to my agent's in Santa Monica," he replied to me that day. "I can give you a ride to your hotel (the Marina Del Rey Marriott, right next to Santa Monica), but that's about it."

The explicit and profane bars and hooks of Jay Z blared through his car speakers. This was long before HOVA became the Obama-approved, hip-hop scion, Beyonce's beau and one of the most recognizable faces in the world. This was straight gangsta in 1998, just a few years removed from all the ruckus Ice Cube and Easy-E and the fellas were causing.

Kobe slowed down and lowered the volume.

"This stuff is a little harsh, huh?" he said, swapping out the CD after about the eighth swear word. "You like the Spice Girls? A lot of people hate them, but the positive image they project, how they make kids feel, I admire that."

He kept going. "People always talk about adjusting and who I'm going to let into my inner circle," he said then. "I don't really need an inner circle."

No, even at 19, Kobe believed he needed just one person: Kobe.

He kept driving. He said he really respected a young Martina Hingis for being able to win and have fun at the same time, speaking as Posh Spice and Scary Spice belted out, "Yo, tell me what I want, what I really, really want."

For years, I wondered if he was projecting what he wanted people to think he listened to, or whether he had unilaterally decided what the white dude with the receding hairline from the New York Times wanted to the hear-the mainstream soundtrack of American tweens.

So I asked him -- 18 years later, in the hallway near the Pelicans locker room during his farewell tour in April of 2016.

"I don't know if it was calculating or just being respectful," he said.

He then mused about what an old Mamba would tell a young Mamba if he could. What a 37-year-old beloved NBA sage would tell a headstrong, can't-wait-to-be-great kid of 17, forever the youngest draft prodigy.

I reminded him of Morgan Freeman's character, Ellis Boyd "Red" Redding, in "The Shawshank Redemption," who wishes he could impart his old-head wisdom to the angry youngster who made the mistake of a lifetime.

"But I can't," Red says. "That kid's long gone and this old man is all that's left. I gotta live with that."

Bryant snickered four years ago outside that locker room in New Orleans.

"I don't think it would matter, because the young version of myself wouldn't listen anyway," he said.

Like a lot of people in the media who covered him, I don't know if I ever knew him well or completely figured him out. He was a different cat, a self-possessed loner at times, whose every waking moment between about 1996 and 2016 was spent perfecting his craft, trying to become the greatest winner and player who ever lived.

Credit: AP
FILE - At left, in a Jan. 25, 2013, file photo, Los Angeles Lakers guard Kobe Bryant goes up for a dunk during the first half of an NBA basketball game against the Utah Jazz, in Los Angeles. At right, in a July 12, 1996, file photo, Kobe Bryant, 17, jokes with the media as he holds his Los Angeles Lakers jersey during a news conference in Inglewood, Calif. Two numbers go into the Staples Center rafters when the Los Angeles Lakers retire the jerseys of Kobe Bryant, the five-time NBA champion and top scorer in franchise history. The Lakers will hang No. 8 and No. 24, representing both halves of Bryant's storied 20-year career. (AP Photo/File)

I don't know if he was obsessed with being Michael as much as he was obsessed with making everyone understand that the closest thing after Mike -- from the stepback fadeaway on the baseline to the devastating dunk that sealed a victory -- was, in fact, Kobe Bean Bryant.

I also believe his insatiable drive and 24-7 focus was tied to the things he heard about his father -- the journeyman NBA player who ended up playing overseas in Italy, where Kobe was born and spent some of his early childhood. Joe "Jellybean" Bryant was said to have been that guy who never took the game or being in tremendous shape seriously enough to have the career many thought he should have had.

Kobe made sure no one ever said that about Jellybean's son.

The truth is that his maniacal basketball obsession, his on-court quest for perfection, helped him to emotionally connect with fans in a way Michael Jordan never had to worry about. Each malicious dunk and every dagger at the buzzer helped the fluent-in-Italian child of the Philadelphia suburbs gain acceptance among African-Americans reluctant to issue him a black card.

Kobe was complicated. You couldn't put him in a box.

Credit: AP
Kobe Bryant poses for a photo during a reception in the Grand Foyer of the White House in Washington, Friday, Sept. 23, 2016, for the opening of the Smithsonian's National Museum of African American History and Culture. (AP Photo/Susan Walsh)

"If we've progressed as a society, then you don't jump to somebody's defense just because they're African-American," he told The New Yorker in 2014, which didn't go over well with Jim Brown's idea of social conscience.

"He is somewhat confused about culture because he was brought up in another country," Brown said at the time, adding that if he were to convene another historic summit of black athletes, like he did in 1967 to support Muhammad Ali over his refusal to enter the military, Bryant wouldn't get an invite.

After the car ride, the next personal encounter with Kobe came in the corridor of the floor the Lakers had reserved at the Plaza Hotel in 2000. I was walking to Shaquille O' Neal's room to show him a final draft of the autobiography I ghost-wrote for him, "Shaq Talks Back." Kobe and Shaq were feuding then and he knew about our business arrangement.

"You a Shaq guy now?" he asked, seriously.

Credit: AP
Shaquille O'Neal, left, and Kobe Bryant laugh as they attend the unveiling of a statue of O'Neal in front of Staples Center, Friday, March 24, 2017, in Los Angeles. (AP Photo/Mark J. Terrill)

He probably felt even more betrayed when he saw my face amid the hundreds of media sent to Eagle, Colorado in 2003 to find out if Kobe was really as sinister as the Eagle County D.A. was portraying him to be as they tried to prosecute Kobe for rape.

In the 22 years after we first met, I went from being charmed by a seemingly unaffected and worldly-beyond-19 supernova to a jaded skeptic who felt duped I hadn't seen his dark side. And then ... astonishingly back again, a 360-degree, come-to-Kobe epiphany.

(Out of respect for the alleged victim and Kobe, I will never proclaim his guilt or innocence in a case that was dropped because the woman wouldn't testify and the two sides eventually settled in a civil suit. The only thing I can say is he worked as hard and as long as he could to put his family back together and change how his worst detractors felt about him.)

Eight years ago, we were playing on opposite sides in soccer star Mia Hamm's charity soccer game in Washington and Kobe the ambassador emerged -- joking, smiling, giving extremely sick children the thrill of meeting and hugging him, camouflaging the uber-competitor as best he could. At some point, I tried to "guard" him. He shook me, as if the soccer ball were a basketball, I fell down and he ran by me a moment later and said, winking, "Mamba gotcha."

He was flawed, like most of us. How flawed? I don't know. And maybe it doesn't matter whether we ever found out who he authentically was. Maybe the majesty of Kobe Bryant is that his religious pursuit of producing a throaty roar from a sold-out NBA arena was what it was all about.

"I felt like I left no stone unturned and I learned as much as I possibly could," he told me four years ago.

Describing his own story, he added, "It's one of constant evolution and constant growth. Just like every other person out there, it's someone trying to figure out who they are. And through that journey, hopefully, you've impacted other people along the way."

Kobe impacted millions. And in his post-career, which already featured an Oscar for a documentary, he was impacting more millions.

And that's where I well up typing this at 9:07 at night in my home. See, it was my daughter's 2-year-old birthday today. Kobe Bryant and Gianna should have had so many more years of happiness ahead with the rest of their family, so many more days when it was no longer about playing and practicing basketball -- it was about coaching your daughter's games, spending time with the people you love and now have the time to spend with them.

At 41 years old, Kobe should have had that time. At 13, Gianna deserved so many more decades. And now a father and daughter are gone and it doesn't matter whether he was famous or not.

It's just wrong. And sad. And all the things you don't want to think about on your little girl's birthday.

RELATED: 'We are in his house' | Grammys opened with a moment of silence for Kobe Bryant

RELATED: A look back at Kobe Bryant's last game in Washington following the icon's tragic death