It’s a story of love and surprise.

It all began 10 years ago when Robert and Nia Tolbert of Waldorf, Maryland ran into each other while visiting their friends at work. From that moment, they were in love.

That love turned into a union when they married on August 31, 2014. At this time the couple had a 3-year-old son, Shai, and would be soon expecting twin boys.

“We joked about having a big family, but we never thought it would happen to us. We thought we were good with one or two, but here we are,” said Robert, a 31-year-old project manager with the federal government.

Here we are indeed. Currently, the couple has a 6-year-old son, 2-year-old twin boys, Riley and Alexander, and now the family is about to double. Let’s just say you can call her the 1-2-3 mom.

Nia knew she was pregnant, but she had no idea what was in store for her. She went to the doctor to get an ultrasound the same day she had a girls’ trip planned to Tampa, Florida.

The 28-year-old mom knew it had to be twins because the nurse began asking if multiples ran in her family. The nurse confirmed her thoughts, “Yes, it’s twins, there are two babies.”

Nia got up to use the bathroom. When she came back, Nia got her sonogram and the nurse had a surprise for her. The nurse told her, “There’s three. Baby A. Baby B. Baby C."

“I just never thought I would see that letter - Baby C,” Nia reacted and then quickly asked the nurse, “Can you check and make sure it’s not four?”

Nia was completely in shock, and according to Dr. Rami Tabbarah, an OBGYN at Inova Women's Hospital, this is extremely rare for a natural pregnancy. He has only seen one other case like this in his 10 years as a doctor.

“It's extremely rare. We’re talking less than one in 1,000 [births]. That’s a very low chance for it happening to anyone in general,” he said. “It’s very rare to have to twins then triplets [naturally] in the same life time.”

Dr. Tabbarah said there are several factors that play a role in producing multiples - a woman's height, heredity, ethnicity and age.

Both Nia and Rob have multiples in their families, and Nia also learned she hyperovulates which means more than one egg is ovulating at the same time.

“Hyperovulation is very rare,” Dr. Tabbarah said. “Eight people out of 1,000 [in the U.S.] might be hyperovulators and those will be the people that get the twins."

“I don’t know how we’re going to do it, but I have to be grateful because we know so many people who struggle with having children,” Nia said. “I know it was a blessing and it wasn’t an opportunity for me to be afraid.”

But on that day, she was still apprehensive and had to share the news with her husband, just hours before her flight.

When Robert came home from work, he found a note on the bed in a gift bag. “Please accept this blessing from me and God. I think you’ll be overjoyed.”

In the gift bag, there were three onesies marked 1, 2 and 3 with a sonogram. He couldn’t believe it.

“Oh I passed out,” he said laughing. “I hit the bed. I blinked twice, when I woke up I saw that some time had elapsed on the clock.”

At this time, Nia had arrived safely in Tampa, but still hadn’t heard a word from Robert, so she began to tell her college girlfriends the news.

“We thought were playing a game, but that wasn’t the case she was surprising us with triplets,” Courtney said.

“Just when you thought the story ended at the twins, it continues,” Maame added. “If anyone can do it, it’s Nia and Rob. Nia is a super mom.”

Seven hours later, Nia finally hears from Rob. She knew he would eventually be okay.

At a gender reveal party, the family learned they’ll be adding three new baby girls to their household. The house is officially balanced. 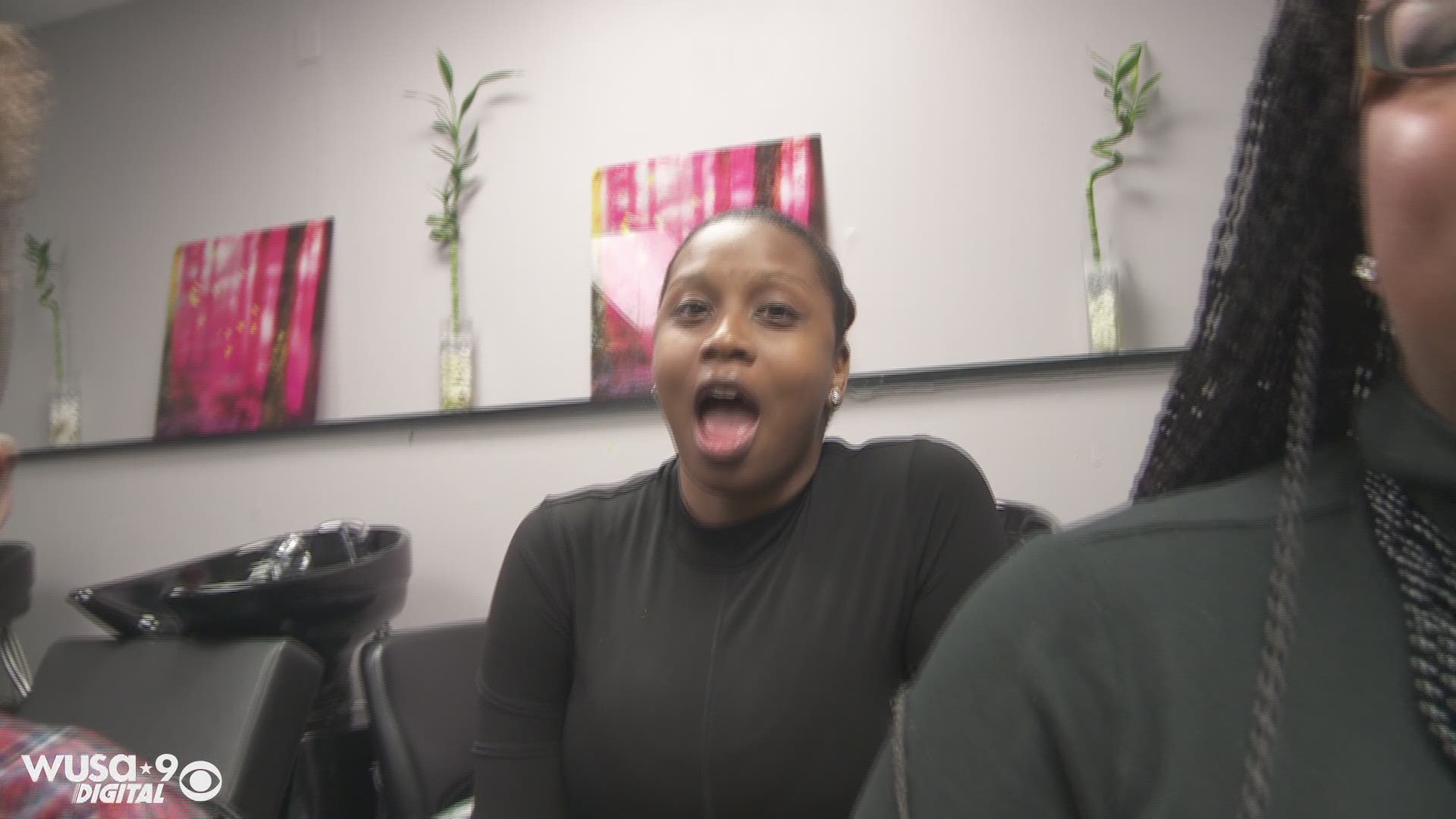 “I love being a mom,” Nia said. “I just can’t explain the feeling of someone yelling at you all day then throwing toys at you, throwing up on you at the end of the day you’re their solace, their go to, their comfort. It’s a really good feeling.”

And if you’re wondering if the couple will test the theory of getting pregnant for a fourth time and having four babies, their response is, “the shop is closed.”

Well, because if it isn’t, Dr. Tabbarah said the couple has an increased risk of having at least twins later on.

Although, this journey was unexpected, the couple says they’re ready.

“I’m excited about more little people that I can love and can love me back and then one day when we’re old a gray, they’ll take care of us,” Nia said.