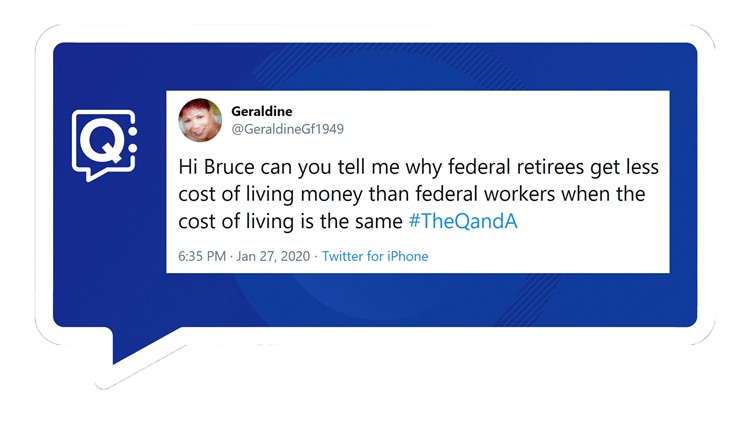 Photo by: WUSA
Twitter question about cost of living for federal works vs federal retirees

WASHINGTON — Around the world, equal pay for men and women has and will continue to be an important topic of conversation until we reach gender parity.

In D.C., a viewer tweeted our Q and A team --  using the hashtag #TheQandA -- to bring our attention to something they believe is an unfair pay disparity: the cost of living increases for federal workers versus federal retirees.

This year federal retirees received a 1.6% cost of living adjustment compared to the 3.1% pay rate increase that federal employees received. Geraldine asked on Twitter why those rates aren't the same, given that the cost of living is the same for everyone.

To get her that answer, our Q and A team skyped with John Hatton, director of legislative and political affairs for The National Active and Retired Federal Employees Association (NARFE).

Hatton gave our team a lot of great info so we decided to share it with you in a federal wages version of quick questions.

"It’s a misconception that federal employees get a cost of living adjustment," Hatton said. "Sometimes people call it that, but it’s actually a pay rate adjustment. The purpose of that cost of living adjustment is to keep up with inflation. And the purpose of the pay raise is to keep up with competitive jobs in the private sector. It’s supposed to keep federal employees from leaving their job for a higher-paying job in the private sector, or to bring them in at a competitive rate."

Who determines what the pay rate increase will be for federal employees?

First, it’s up to the president to decide what that might be using those figures as a baseline and then it’s up to Congress to say if they agree or disagree with the president. Last year, Congress disagreed and they provided a higher pay increase based on that that employment cost index.

Will the scales of pay increases always tilt in favor of current employees?

"Last year social security and Civil Service Retirement System (CSRS) increase was 2.8%, while the pay increase was 1.9%, so it changes from year to year," Hatton said. "It’s not like you always get less."

What is CRSR vs. FERS?

RELATED: Have a question? Our new show is 100% based on getting you answers! Here's how it works

If you have more questions for #TheQandA team, use the hashtag on social media and tag @wusa9.