Garth Brooks to perform in Maryland for the first time in 6 years. Here's how to get tickets

The Country Music Hall of Famer will perform at M&T Bank Stadium in Baltimore on Saturday, October 2. 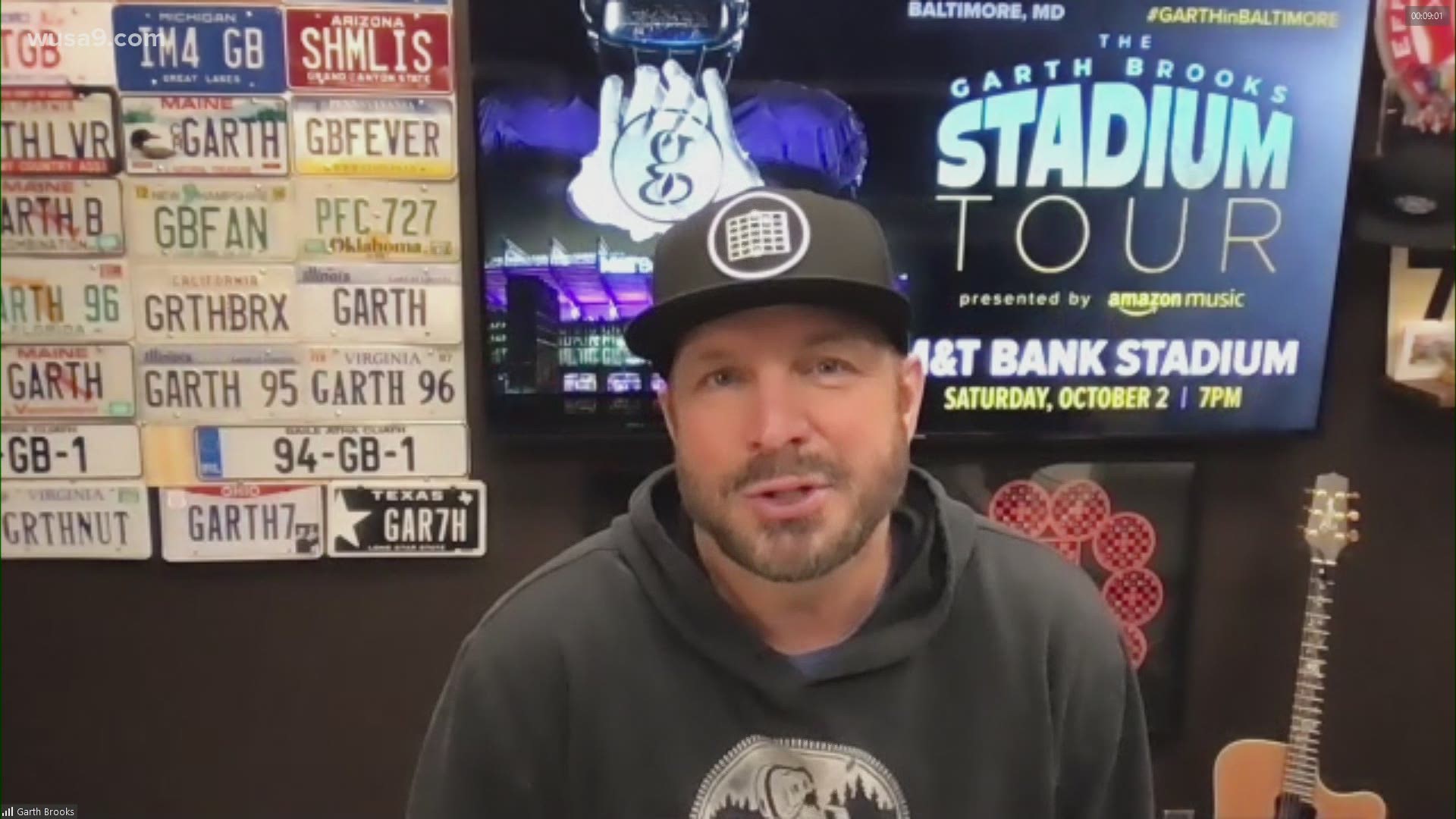 BALTIMORE — Country music legend and recent Kennedy Center honoree Garth Brooks will perform for the first time in M&T Bank Stadium in Baltimore this October. It's part of his stadium tour, and his only Mid-Atlantic tour stop in 2021.

There will be an eight ticket limit per purchase. There are only 3 ways to purchase tickets: at ticketmaster.com/garthbrooks or on the Garth Brooks line at Ticketmaster, 1-877-654-2784 or through the Ticketmaster App on your mobile phone. There will be no sales at the venue box office on Friday July 23rd.

All COVID rules will be enforced.

Brooks told Get Up DC he's excited to be back on the road and touring, despite lingering concerns about the pandemic.

"I think you'd be crazy not to be concerned, but I think if there's anything hopefully we've learned over the last year and a half: Just follow the rules, man." Brooks said. "Let's do this for a little bit of our lives so the rest of our lives can be hopefully be lived safe and long and healthy."

Brooks was one of five artists to receive the Kennedy Center Honor in May of last year.

"The Kennedy Center was pretty cool. I think Dick Van Dyke said it best when he said 'What's next? Knighthood?'"

Brooks said fellow honoree, violinist Midori, said the award inspired her to do even better.

"I was floored by that answer. It makes me want to make the next gig we play the best gig we've ever played."

Brooks' long career in music has been historic.

He is the first-ever seven-time recipient of the CMA Entertainer of the Year honor. Brooks is the first and only artist in history to receive nine Diamond Awards for the now nine diamond-certified albums at over 10 million album sales each. He remains the No. 1-selling solo artist in U.S. history, certified by the RIAA with 157 million album sales. Recently, he was awarded Country Touring Artist of the Decade at the 2021 Pollstar Awards. Last March, Brooks received the esteemed Library of Congress Gershwin Prize for Popular Song.

He also sang "Amazing Grace" at the Inauguration of President Joe Biden back in January. While he identifies as a Republican, he called performing at the inauguration was a chance to serve.

"I never served in the military so this is my chance to serve. When you get called by a president, no matter what -- Republican or Democrat or what they are -- that's an honor to get to be there," Brooks said.

His October 2 show in Baltimore will be his first concert in Baltimore in six years. It's part of his Stadium Tour, which launched in 2019.

More information can be found here.

RELATED: Garth Brooks to host concert event at 300 drive-in theaters across US