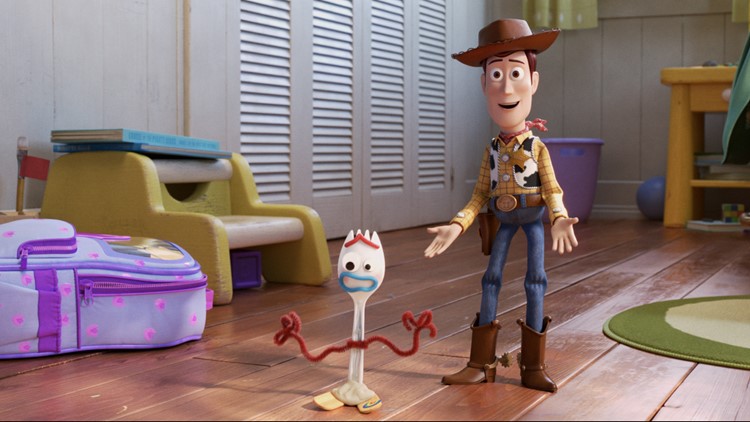 Photo by: AP
This undated image provided by Disney/Pixar shows a scene from the movie "Toy Story 4." (Disney/Pixar via AP)

WASHINGTON — When I first learned of Toy Story 4, I insisted the only story worth seeing would be Andy coming to his senses and taking his toys back from Bonnie. I know I can't be the only millennial who was emotionally traumatized by his betrayal.

Oddly enough, Pixar avoided any plot involving a grown adult stealing from a child and instead picked a more traditional storyline following Woody -- voiced by Tom Hanks -- and Buzz -- voiced by Tim Allen -- on a road trip.

The latest edition to the Toy Story saga finds Woody at odds with his place in a world without Andy. Woody still firmly believes it's a toy's life purpose to help their child, but Bonnie does not seem to want his help in particular. However, when she creates a brand-new toy named Forky -- voice of Tony Hale -- Woody decides he'll do everything he can to keep Forky with Bonnie.

This task becomes even more complicated when Bonnie's family takes a road trip and Forky throws himself out a window. Woody then has to go after Forky and hope he can get him back in time before Bonnie notices he's gone. His journey reunites him with Bo Peep -- voiced by Annie Potts -- who has become a lost toy, and unexpectedly has Woody questioning his own life's purpose.

Any movie with "Toy Story" in the title is likely guaranteed to make money, so it's not hard to wonder if that was the sole reason this movie was created. And honestly, I'm sure that's a large factor in why it was greenlit. That being said, Toy Story is the franchise that built Pixar and, I believe, the creative development team outdid itself continuing to grow these characters.

This could partially be because the crew was split between people who worked on the first film, and newcomers who had grown up watching the series. In an interview with The Washington Post, Producer Jonas Rivera said, "...there’s younger people on the crew who say that ‘Toy Story’ was the first movie they ever saw. They were about 6 years old when ‘Toy Story’ came out — they’re now animating and lighting shots — and they said, ‘We’re not going to let you guys mess up my childhood.’

I went into this movie with very low expectations and found myself pleasantly surprised at how enjoyable it is. There were more than enough heartwarming and laugh-out-loud moments that made me feel like my money was well spent. My only complaint of the film may be that because this is the fourth movie of the series, there are more characters than I'd like to keep up with.

I think it's worth mentioning the animation is spectacular -- 3D animated films are everywhere these days; with technology advancing enough that it can be difficult to tell the difference between reality and animation. The details in the individual toys are painstakingly intricate. However, I found myself most impressed with the use of the light in the film. Pixar pushed past reality into hyper-realism, creating a breathtaking piece of art. It'll have your brain going: Wow. They. Did. That.

In 2010 when Toy Story 3 was released, it was widely received as the perfect conclusion to an industry changing story. I still believe Toy Story 3 is the perfect ending to this saga, however, Toy Story 4 still proved to be both an entertaining and compelling story. I recommend seeing the movie in theaters.

As research for the review, I wanted to make sure it was recommended by kids too. I decided to ask my 5-year-old nephew his opinion. When asked if he liked the movie, I got a very loud and outraged, "Duh!"