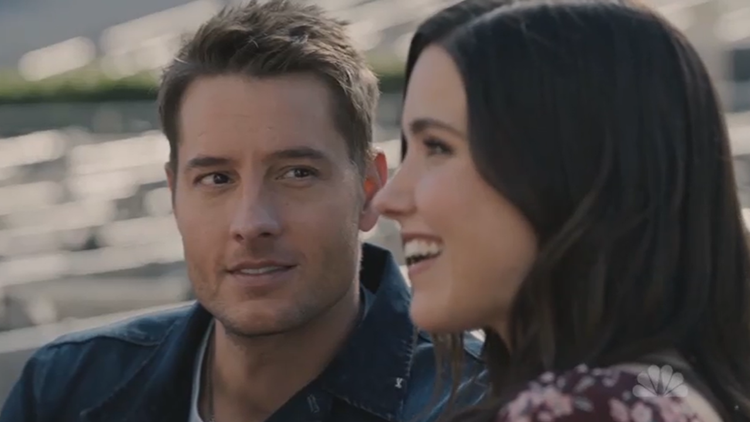 'This Is Us': Sophia Bush's Season 4 Visit Takes a Shocking Turn -- What Does It Mean for Kevin?

Warning: Spoiler alert! Do not proceed if you have not watched Tuesday's season four winter premiere of This Is Us.

This Is Us kicked off the second half of its fourth season on Tuesday, and the winter premiere, titled "Lights & Shadows," marked the introduction of Sophia Bush's character -- and a special cameo by John Legend, who debuted a romantic new ballad. (More on Legend later.) While speculation was that Bush could be playing Kevin's (Justin Hartley) future, pregnant fiancee, this episode answered all of those questions. So, is Bush sticking around on This Is Us?

The former Chicago P.D. star made her debut at a key moment in Kevin's life. The Pearson sibling, who had prophesied that by his 40th birthday he would be married and have a child, had gone on a string of unsuccessful blind dates at a local coffee shop in an effort to make it so. After his second failed date with a woman who snarked about the uselessness of Ethiopians (oof), Kevin decided to take a pause on dating apps as a way to find his person. It was at that moment, at the same coffee shop, that he locked eyes with Bush, who plays a woman named Lizzie.

Kevin and Lizzie's connection was immediate. Her cute dog is even named Adrian Balboa, a reference to Rocky Balboa's wife, if that wasn't fate enough -- and Kevin, the hopeless, all-in romantic he is, thought the same. (Rocky's portrayer, Sylvester Stallone, guest-starred on This Is Us in season two.) Unfortunately for Kevin, he quickly learned that Lizzie -- whom he's starting to believe could be The One -- is only in town for a conference and jumping on a plane back to Chicago (cute nod to P.D., This Is Us writers) the following day. So Kevin does what any well-meaning (ahem, wealthy) Hollywood star with connections would do: He gives Lizzie the ultimate day in L.A., so she can't help but fall in love.

And that meant bringing her to an empty Hollywood Bowl and having a private concert performed by her favorite artist ever, Legend, who performs his gorgeous new song, "Conversations in the Dark." Talk about a flex, Kev. During their impromptu date, Kevin brought up his parents' epic love story and how fated they were, alluding to the fact that he's been looking for that same epic love story too. It's clear from his time with Lizzie how quickly he's already fallen for her from the four, five hours they've spent together. And he took the next step in their blossoming romance by going in for a kiss.

But things took a turn for the worst when she stopped it from going any further, taking Kevin by complete surprise. "I can't do this," Lizzie said, pushing him away before letting it slip that Kevin was her "hall pass." Her... what? Turns out, Lizzie isn't who she says she is. She's married. Rubbing salt in the wound, she's actually been texting with her husband all this time -- not her mom, like she said before --  and getting his approval to "go for it" with The Manny. Yikes.

The devastation on Kevin's face was heartbreaking, as it dawned on him that maybe he wouldn't find an epic love like Jack (Milo Ventimiglia) and Rebecca (Mandy Moore). After stumbling through half a dozen relationships -- from his first love, Sophie, to playwright Sloane to Olivia to Beth's cousin, Zoe, to more recently, Army vet Cassidy -- who could blame him?

Always one to go with his gut, Kevin made the grand pronouncement to a random P.A. on his way to set for reshoots of his M. Night Shyamalan movie, that maybe a love he's been seeking his entire life like his parents' "is not in the cards for him," and he gives his phone to the P.A. to hang onto. No distractions, you know. And right at that second, a woman from Kevin's past calls his phone...

Is Kevin's first love and ex-wife now back in the picture and possibly his future fiancee? Sophie's re-emergence in his life is a bit shocking and unexpected, considering the last time they reunited in a season three episode, Sophie (Alexandra Breckenridge) seemed to happily be in a relationship and moving on with her life. She even forgave Kevin, a huge move considering how rocky their relationship was. While it remains to be seen how significant a presence Sophie will have in Kevin's life, there are some clues pointing to where this storyline could go.

Since the season four fall finale, fans have theorized over who Kevin's mystery woman could be. One popular season four theory was that Cassidy, Kevin's Alcoholics Anonymous friend-turned-one-time-hookup, was the mother to Kevin's mini-me, who viewers briefly met in the future flash-forward. Though it appeared that This Is Us nipped that theory in the bud after having Cassidy return to her husband and son, it wouldn't be surprising if she came back into Kevin's life in the months after Thanksgiving.

Or it could end up being Sophie; surely, her late-night phone call would fuel even more speculation. Or, Kevin's mystery fiancee could be someone who hasn't been introduced yet. Is this mystery woman The One for Kevin? Considering everything he's gone through, especially on the heels of Lizzie's heartbreaking rejection, fingers crossed that's the case.

Watch the official lyric video for Legend's new song, "Conversations in the Dark," below.

To stay up to date on breaking TV news, sign up for ET's daily newsletter.

'This Is Us': Sophia Bush Joins Season 4 in Mysterious Role

'This Is Us' Creator Shoots Down Two Popular Fan Theories

'This Is Us': John Legend to Guest Star in Season 4

'This Is Us': 8 Biggest Questions After the Season 4 Fall Finale