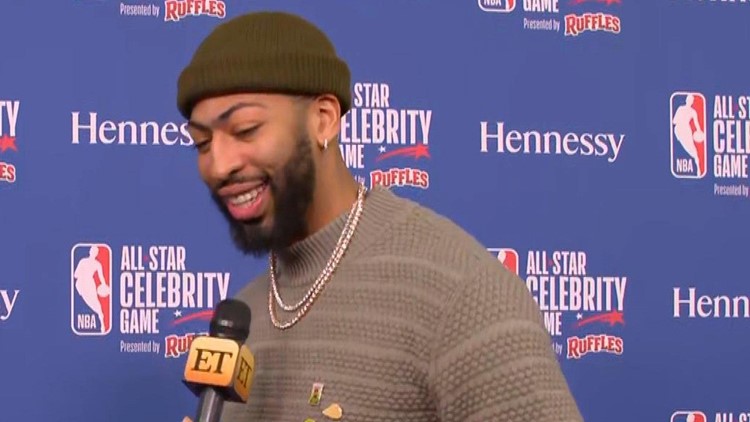 Anthony Davis is doing what he can to continue Kobe Bryant's legacy with the Los Angeles Lakers.

ET's Nischelle Turner spoke with the 26-year-old basketball player during NBA All-Star Weekend 2020, sponsored by Ruffles, in Chicago on Friday, where he shared how the team is coping since Bryant's death.

"It's tough, it's nothing that you can get over right away, especially in the Laker organization. He's touched so many people in the organization that it's not something that you just get over," Davis expressed. "We see his numbers every day on the floor, in the facility. We wear it on our jerseys. It's something we don't get away from and we don’t want to get away from it. We try to use that as motivation and fire power and go out and play for him every night."

Bryant, his 13-year-old daughter, Gianna "Gigi" Bryant, and seven others died last month in a helicopter accident. The Lakers -- the team with whom Bryant spent his entire 20-year NBA career -- have gotten closer during this difficult time, Davis said.

"We all came together and shared some of our best moments, and we know that he would be proud of us and we gonna do as much as we can to make him proud, on the floor and off the floor as well," he shared. "Everything he stood for, everything he embodied, we want to continue that legacy with the Lakers organization."

This year's NBA All-Star Game will be an emotional one, as Bryant, Gianna, and the seven others who lost their lives will be remembered by the athletes. LeBron James' team will be wearing the No. 2, in honor of Gianna's Mamba Academy basketball team jersey number. Giannis Antetokounmpo's group will wear Bryant's No. 24.

"That's something that's special that the league came up with and I think it's something special for all of us, because so many guys have been affected by Kobe," Davis relayed. "To honor his legacy, they decided to wear the numbers for him and his daughter and that was a cool thing."

The Chicago native, meanwhile, is grateful to be back in his hometown. "It's memorable for me, just in a sense that I get to see my friends and family again. I'm all the way in Los Angeles," Davis noted. "To be here and kind of be an ambassador for the city, show these guys a good time, do something for the community, it's been great for me so far and I'm looking forward to the rest of the weekend."

Davis is also promoting his recent work with Ruffles. The player teamed up with the company to create his own signature potato chip, Ruffles Lime and Jalapeno by Anthony Davis. "I like spicy food. I like spice and so I was like, 'I want something with jalapeno,'" he explained of how it came to be, adding that they put in the lime and "it was a great combination. We tried it and it worked well together."

Earlier in the day, ET also spoke with Chris Paul about his bond with Kobe and Gianna.

"Man, it's crazy," Paul told ET, getting teary-eyed. "For me, it's just still not real. So, just seeing that connection and knowing how important his family was to him, all his girls. Vanessa... it's still tough for me to comprehend and to understand."

Watch the video below to hear more of what he shared.