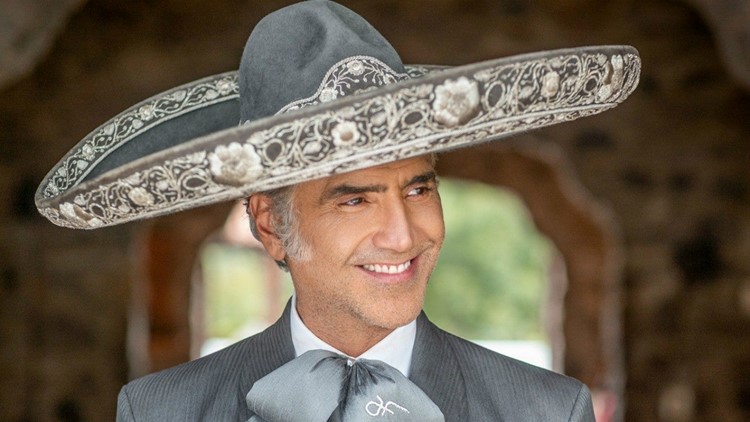 El Potrillo is heading back to his roots.

After successfully tackling the pop genre for a number of years, Alejandro Fernández returns with a 100 percent ranchera and mariachi album, Hecho En México. The 48-year-old singer is no stranger to Latin music, with a career spanning 30-plus years, selling over 30 million albums worldwide, winning a number of Latin GRAMMYs, and a family legacy to back him up.

Fernández may be Mexican music legend Vicente Fernández's son, but he quickly broke out of his father's shadow early in his career. Now that Vicente has retired from making music at the age of 79, Fernández felt it was time to return to his roots and "continue the legacy."

"I'm happy to be able to return to my origins," he exclusively told ET. "I had given myself a chance and time to experiment, and the public gave me the opportunity of being able to explore the pop genre. I created pop music for a long time and I really wanted to return to the ranchera genre. It had been, like, 15 years or more, and I think it was the right time to be able to do this. Plus, I felt I owed it to my audience, my fans, and to myself and Mexico. Also, my dad, two years ago, retired from making Mexican music, and I had to continue the legacy."

And he does so with his latest LP,  which also includes a heartfelt duet with his father on a song called "Mentí."

"He heard the album as soon as I finished it. I took it to him, and he loved it. In fact, that was when I asked him if we could sing a duet," he shared. "He listened to 'Mentí,' and we recorded it just in time, or else the collaboration wouldn't have been featured on the album."

As for recording with his father, Fernández says it was so easy, as Vicente is a "mega, mega, mega professional and recorded the song super-fast. I had to deliver the album in two days, and in those two days, he learned it one day, the next day he recorded it and we sent it out."

As for the rest of the album -- which has already spawned hit lead singles "Cabellero" and "Te Olvidé" -- the singer is all about creating music that seduces you and gives you chills.

"I think that all the songs I choose at the end have to seduce you," he candidly stated. "You have to feel them on your skin, they have to give you chills, make your hands sweat, make you tear up. There are a lot of elements that I have to check off when I listen to a song. Every song that I record has to move me, and if they are on the album it's because I felt them."

One that fans can definite get all the feels from, which is among Fernández's favorites, is " Por Tu Adiós," which he simply recorded with a guitar and harmonica. "It's a song that you sing as if you're in a cantina. It brings about a lot of nostalgia," he said.

While urban and reggaeton is having its moment, Hecho En México is an 11-track compilation of traditional Mexican music filled with the nostalgic, soulful sounds that incorporate a mariachi band and corta venas ballads. With such a classic genre that represents an entire country, how does one continue to capture a younger audience and maintain a fresh sound?

"The most important thing, for me personally, is to pay close attention to the melodies," Fernández explained. "Making sure that the melodies are fresh, innovative, new and not boring. There's also the composition, the lyrics and the arrangement that go hand-in-hand. Together with the producer, we create a fresh sound."

"With the Mexican genre, you have to respect the elements that create it, you can't play too much with it. But we can play with different instruments," he added. There's also working with a very talented and younger group of Mexican singer-songwriters like Christian Nodal, Joss Favela, Espinoza Paz and Chico Elizalde."

"Practically all the composers we work with are new, they are young and are from the new generation that are having a lot of success," Fernández noted.

With Hecho En Mexico out, Fernández will next embark on a world tour, hitting North and South America, Spain and performing for the first time in London, Paris and Canada. "This is one of the most important tours that I'll have done in my career," he expressed. "With these new markets and doing all this work that opportunities and more doors can be opened abroad."

"I feel honored to be given this award, but I believe the best prize I can ask for will always be my fans' applause."

Hecho En México is out now.